In the 1970s, the world was rocked by a series of fuel crises as political conflict suddenly stopped the flow of oil from the Middle East to Europe and North America. Since they didn’t produce much oil on their own (and since many cities had extremely narrow roads), Europeans were used to small, fuel-efficient cars; but in the United States, land of wide-open spaces and wide roads, fuel economy had not been more than an afterthought since the end of World War II. 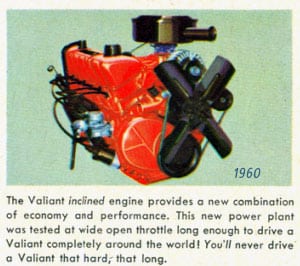 American automakers rushed to quick fixes, such as importing captive cars from foreign subsidiaries—such as the Cricket—and rebadging Japanese cars—such as the Colt. They also looked seriously at diesel engines, and Chrysler both imported Mitsubishi diesels and started a research program on converting their standby slant six. Diesels were hot among customers, despite the common blue smoke; Mercedes and Volkswagen were minting cash selling their slow, efficient “oil-burners.”

Tony Lewis uncovered Ricardo’s 1981 report on converting the 225 cubic inch slant six into a diesel engine; Chrysler had engaged them because they were experts in light-duty diesel engines, consulting with most European manufacturers. Ricardo worked on development and proving tests as well as lending their expertise, using the Volare and Aspen as mules.

The engine they foresaw would have fuel injection, a 21.5:1 compression ratio and glow plugs to allow for starting down to –4°F. To allow for starting below that temperature, the compression could not be raised any higher, and a “supplemental starting aid” was needed. Drivability was expected to be as good as, or better than, the gasoline engine, and it would not need quite so frequent tuning to stay good.

Ricardo was somewhat surprised by the fact that the engine would not lose much power when converted to diesel; normally, gasoline engines would lose around 30% of their power, but the slant six was rather under-optimized (compared with typical European four and six cylinder engines, rather than its American counterparts), and they estimated that the actual power of a production fuel-injected diesel slant six would be identical to the single-barrel gasoline form. Cutting the smoke and hitting a 1g/mile nitrogen oxides level would, though, cut 10 horsepower and reduce fuel economy by 10%.

The engine would be considerably noisier than the gasoline version, which was fairly quiet; but if retuned to meet low emissions standards, it might end up roughly the same as the gasoline engines.

Design changes to the block were limited to extra metal between the pushrods, to support the gasket below the plug; even the four-bolt head fastener system was kept. The gasoline-engine manifold layout would also be kept, but Ricardo wanted to completely change the heads, with vertical valves and the company’s Comet chamber design. The injector would be angled at 30° (of vertical) with glow plugs included. Drilled passages between the valve seats were needed for cooling. Pistons were expansion-controlled, not the kind used by Chrysler. The cam was new, as one would expect.

The fuel injection system used a mechanical fuel pump driven by a duplex roller chain from the crank (gears were seen as too noisy and toothed belts would have been too large). The chain would need adjustment roughly once every 50,000 miles. The exhaust manifold was a single-piece cast iron design which eliminated the gasoline engine’s hot spot, with one of two intakes considered (“log” style and one with a circular plenum which included the air cleaner and long tubes to the ports). The actual injectors were Bosch KCAs.

The first prototype, with the first calibration, had less power and economy than desired, with more smoke, though the engine was breathing well and had reasonably lower-than-expected friction; volumetric efficiency went up to 87.% (at around 2,500 rpm), with the circular-plenum intake doing better. Given these results, Ricardo went ahead and worked on combustion and fuel injection tuning.

The first chamber designed by Ricardo had too much bump clearance, fixed by machining the top deck and recessing the valve seats further, along with other changes. The glow plug was kept in its primary place, because while it performed better in the downstream position, the engineers thought it would result in oil leaks and overheating as fuel hit the glow plug.

There were some mechanical issues affecting longevity, the worst of which appears to have come from the European pistons, which were eventually resolved by switching to pistons from Mahle or Schmidt (both were satisfactory). Durability testing ended up being reasonably successful, but it appeared that there would be problems if they tried to turbocharge the engine.

Retuning the fuel injection resulted in peak horsepower of over 70 kW and torque of over 220 Nm, with fuel consumption averaging around 275 grams/kwH.  Converting to American units, the engine lost only a few horsepower from its 74.6 kW gasoline rating, with torque dropping by around 5% to roughly 162 pound-feet.

Finally, the mules were tested, using a Plymouth Volare loaded with a gasoline slant six, then a diesel slant six. Once the axle ratio and different injection timings were tested and optimal ones selected, they found:

The diesel engine slashed controlled pollutant emissions, while dramatically increasing fuel economy; the only drawback was the relatively small drop in power. While 0-60 sprints fell, it’s possible the engine would feel more responsive, with better torque. The diesel would warm up more slowly than gasoline engines, so drivers would stay colder longer; one potential solution for that was increasing exhaust back pressure to load the engine. Top speed would also likely be lower, given the lower redline of the engine. Noise was only around 2 decibels louder than the gasoline engine, and starting was tested to 0°F.

The project appears to have ended with this test of a 1977 Plymouth Volare four-door sedan, possibly because the fuel-economy craze was slowing to a halt, possibly due to the expense of the program coupled with Chrysler’s increasing lack of capital. Usually, though, people say the program was dropped because of GM’s awful conversion of their V8 gasoline engine to diesel. 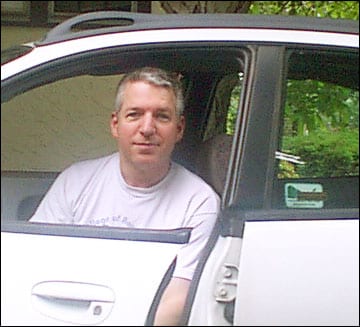 David Zatz started what was to become the world’s biggest, most comprehensive Mopar site in 1994 as he pursued a career in organizational research and change. After a chemo-induced three-year break from Web sites, during which he wrote three car books covering Vipers, minivans, and Jeeps, he returned with some friends to create StellPower.com, which is intended to end up as an enduring partnership. Contact him at (973) 925-6058.

Site copyrighted 2020-2021 BusiStories LLC, with an eye towards LLP status in 2021. Do you want to join us? You can! Contact us! (You can sponsor this site to keep ads away). Not associated in any way with Stellantis.