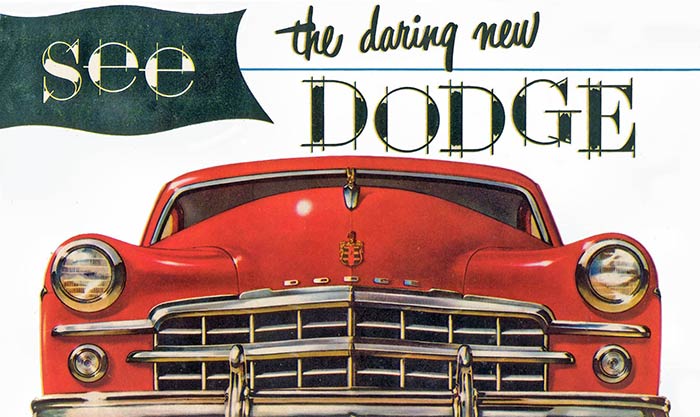 The “completely new” 1949 Dodges, like the lower Plymouths and the higher DeSotos and Chryslers, were created to the specifications of Walter Chrysler’s protegé,  K.T. Keller.

K.T. was a great wartime leader for Chrysler Corporation, ordering daily miracles for the United States military; the company did an incredible job of producing anti-aircraft guns, aircraft parts and engines, tanks, trucks, radar units, and a wide range of other gear, all for essentially zero profit. As a business, Chrysler gained nothing from its patriotism, other than the knowledge they had saved numerous American lives (as well as those of Europeans who were being mass-exterminated by the Germans). After the war, though, Keller’s leadership was disastrous for Chrysler. His attention seemed to be mainly taken up by the military and aerospace businesses, and his imposition of his own tastes on the postwar cars severely damaged Chrysler’s sales.

The 1949 Dodges were new in both body engineering and name. These were the first Dodges to have modern style names: Wayfarer, Meadowbrook, and Coronet (which the company referred to as different cars in the advertising, but were all essentially the same car in different trim levels). Coronet was the top of the line for 1949, but a new car would come in above it a year later, and another a year after that; Coronet quickly went to the bottom of the line, which must have annoyed any Coronet owners who failed to trade in every year.

More to the point, thanks to a $90 investment, all the Chrysler cars were really new—the first true postwar models. They had a longer wheelbase but shorter length than the prior models, a sort of cab forward design, which was good for handling and ride if not so good for styling trends of the day.

The 1949 Dodge lineup was nicely styled, and you could sit upright in any one of them without having to take off your hat—even as most buyers, eager to get over the sacrifices of a wartime economy, wanted something frivolous—long, low, and sleek. Dodge had nothing for them; indeed, Chrysler as a whole was just about the opposite of today’s Dodge in character. Still, the cars were comfortable and reliable, well-engineered even if they didn’t excite anyone—or have a single V8. 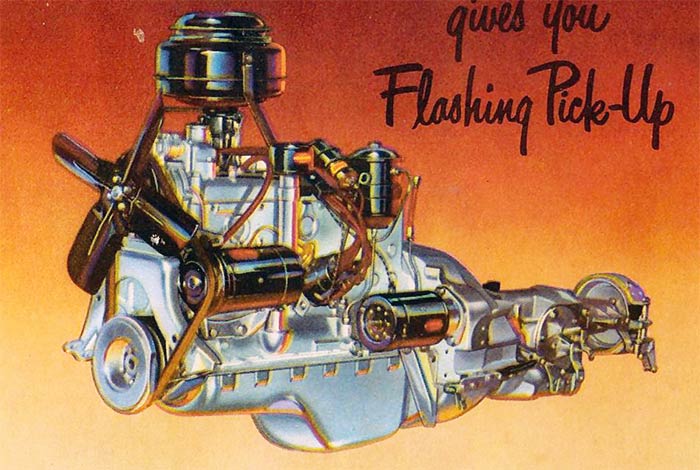 The sole powertrain for Dodge was a flat-head six-cylinder engine, topped with a Stromberg single-barrel carburetor, producing just 103 gross horsepower at 3,600 rpm; that engine stayed on through 1953. The engine produced most of its sizable 190 pound-feet of torque just off idle, at 1,200 rpm, where it was most usable for normal driving—especially handy with the oddball semi-automatic transmission.

Buyers then had a choice of a three-speed manual transmission or a semi-automatic. The semiautomatic was a disadvantage given that Pontiac, Oldsmobile, and Cadillac all had a full automatic transmission; 70% of Pontiac buyers took it in 1948, its first year there. Buick and Chevrolet had an automatic on the way; Ford was working on one in 1949, and launched it with the 1950 models. Dodge’s “Gyro-Matic” transmission had the driver start out in low gear with a clutch; then shifting into high gear left all the work to the transmission. This was only available in the top of the line Coronet; Wayfarer and Meadowbrook buyers had the manual shift only.

On the lighter side, Floating Power reduced vibration, a new distributor had better seals for wet weather operation, the 40-amp generator provided all the electricity one could want, and a new carburetor promised a faster response.

Inside, the cabin promised and delivered comfort, front and rear. The front wheel was pushed as close to the bumper as it could be, and there wasn’t much overhang in the rear, either, for the time; this helped with cornering as well as comfort. The rear passenger sat just forward of the axle, while the driver was nearly midway between the axles. Upholstery was cloth, with leather still quite rare in automotive use; the split windshield was a bit of an anachronism.

The names of the cars came from varied sources; a coronet is associated with royalty, a wayfarer is obvious, and Meadowbrook was the name of the Dodge Brothers mansion. One associated Plymouth was most likely named after a local private school, though most Plymouths were named after hotels. (Lanny Knutson of the Plymouth Owners Club theorized Cranbrook may have been named after a city in Canada, since the 1949 paint roster included four Canadian place names.) 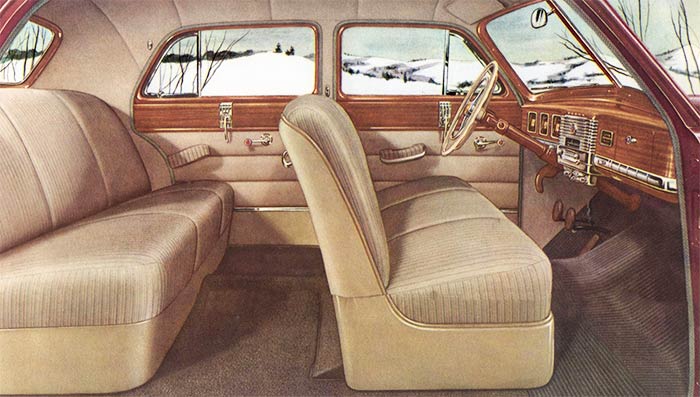 At this point, Chrysler cars were extremely similar across brands; there was the Plymouth, the Dodge, the DeSoto, and the Chrysler, and the main differences between them came down to trim and powertrains. Dodge’s own brochure noted that the new Dodge Meadowbrook was identical in body style, dimensions, and power plant to the Coronet; it was “for those willing to forgo certain details of trim and fittings but demanding the same roominess, riding qualities and sterling worth in every functional detail.” (Coronet is shown in the images.)

There were numerous changes from the older models, first introduced pre-war and upgraded steadily into 1948. The rear quarter windows moved from the body to the doors; all four doors on the sedans were front-hinged (no more suicide doors); the headlamps were mounted higher up and further out, and used new sealed beams; and many styling efforts were made to cover up seams and make curves blend together.

The new dashboards were a cut above the prior ones, though not as out-of-market as Plymouth’s; they included a key-start ignition switch. The windows had new mechanisms designed to go from fully open to fully closed (or vice versa) in just one and a half turns of the handle, so the driver could focus on the road more. Panel lighting was adjustable via rheostat; options including the radio, clock, and heater were all well integrated. Gauges were designed to be easily readable.

The overall construction methods, though, were the same as before, with similar frames and cross members, steering, and such; engine compression did rise up, but the engine was extremely similar to the ones used by Plymouth. Both brands got new intake manifolds designed to distribute the fuel/air mix better, a higher-capacity fuel pump, and automatic choke with an electric heater element so the choke would shut off more quickly. The engine included new rings, both for better drainage and better sealing; resistor spark plugs to avoid radio interference; and a larger starter motor.

Despite later advertising, Dodge was decidedly not the Chrysler performance king. Plymouth had a slightly smaller engine and considerably lower weight, and Lee Petty was starting to win races with a 1949 Plymouth business coupe; he took second place in the final points championship. The car had a top speed of just 92 mph but it could keep running that speed through the race. The engine was repeatedly torn down and rebuilt as other racers claimed Lee must be cheating; but he was running a stock motor. In late 1949, Walt Faulkner beat V8-powered cars with his Plymouth six at Delmar, for example. Plymouth was #3 in stock car wins from 1949 to 1952; Dodge was barely visible… for now. The Hemi V8 would change that.

2 thoughts on “1949 Dodge cars: practical at the wrong time”