Recently, a Chrysler employee posted part of an internal brochure, and it reminded me of the time when Chrysler came back with a vengeance. This was not the first time, as most readers know; the company has had an absurd number of comebacks under charismatic leaders—under Walter Flanders, Walter Chrysler, Lee Iacocca, Bob Lutz, and arguably Sergio Marchionne. The only uncharismatic leader to lead a Chrysler comeback, Lynn Townsend, was nevertheless in the same tradition.

The 1990s comeback was unusual in that it was intended to be a cultural change as well as a product change. The company therefore established a new, clearly stated, simple purpose, as well as core values and beliefs (in five groups, one for each side of the pentastar: customer focus, inspired people, continuous improvement, financial success, and reputation).

The first inkling most people had of the 1990s Chrysler comeback was a huge spread in the New York Times, revealing the LH cars. The company’s stock quickly shot up to five times is pre-story value, showing that market analysts had been phoning it in for quite some time. The LH cars were revolutionary in the American large-car market, providing interior spaces unseen at Chrysler in decades with good cornering and reasonably swift acceleration provided by a 3.3 liter V6 and a new, technosavvy 3.5 liter variant. 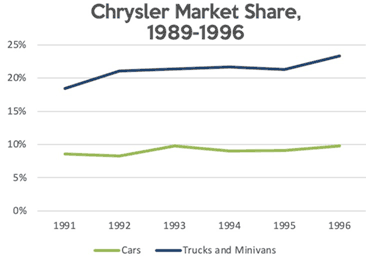 The next up was the 1994 Dodge Ram pickup, with unique big-rig styling that has since been closely copied by Ford and Toyota; with its unique, customer-centric interior and high capacities, the new Ram was the most comfortable pickup available, and Dodge’s truck market share quickly tripled. Then the 1995 Dodge/Plymouth Neon arrived, the first American compact car to make an actual profit in years; Toyota bought several to figure out how they could outpower, outcorner, outbrake, and out-space pretty much every compact car on the market, all at once, and at low cost. Neons dominated their class in stock car racing for years; their engine provided 132 hp and 129 lb-ft of torque at a time when Civics topped out, only in the priciest model, at 125 hp and 100 lb-ft, and when two-digit horsepower was the norm. 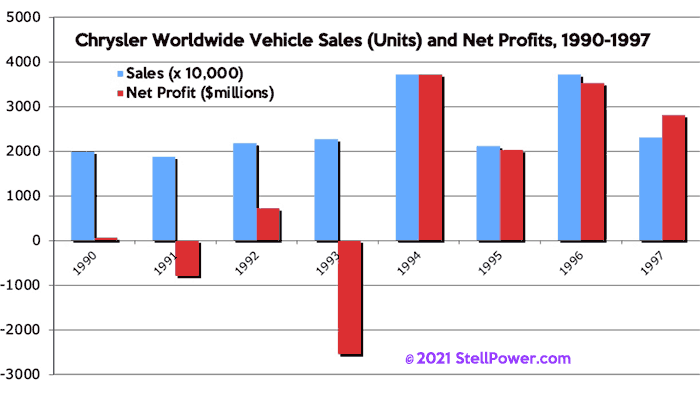 Next came the cloud cars, critically acclaimed as the best midsize sedans on the market; and a new convertible based on them. Chrysler earned $61 billion in 1996 with a $3.5 billion net profit. A brand new Dakota and Wrangler followed for 1997, along with the Viper Roadster and Plymouth Prowler. The company closed its final full year of independence, 1997, with a $2.8 billion net profit and $61 billion in revenue.

The only thing that could stop Chrysler was a highly improbable sale to, say, a large German conglomerate with a relatively small car business; and that is what ended the winning streak, with the merger taking place in 1998, and the winning streak ending two years later. But that’s a story for another time.