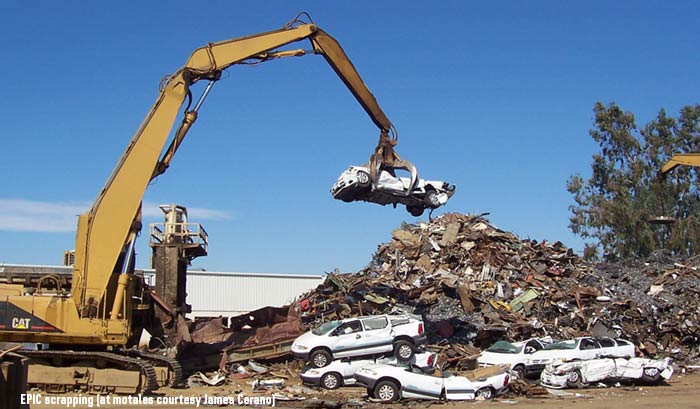 Way back in the early 1990s, Chrysler worked with a power company group to build its first all-electric minivans. They were never too famous—the maker of Who killed the electric car? apparently missed them completely—but some of them ended up in private hands and lasted a good many years after their creation.

Chrysler followed up the original “TEVan” with a new one, EPIC, which had more power (turning “same-day acceleration” into “within-the-minute” acceleration) and a number of features that eventually became part of the gasoline-powered minivans. The company likely intended to make more of them, since it was integrated into the regular production line and the development process, but demand wasn’t really there.

A new generation of the EPIC was planned for 2003; fifty cars were made and certified for sale by the EPA. You can probably guess their fate from the image: all fifty were destroyed, and with them, Chrysler’s only all-electric cars until the Fiat 500e… and their final battery-electric minivans, at least for the moment.

The full story, including just how slowly they ran to 60 mph, the range, the battery chemistries, production and sales figures, and some of the inside story, is all at motales.com’s history of the EPIC minivans (and TEVan).

1 thought on “When they crushed the EPIC minivans”