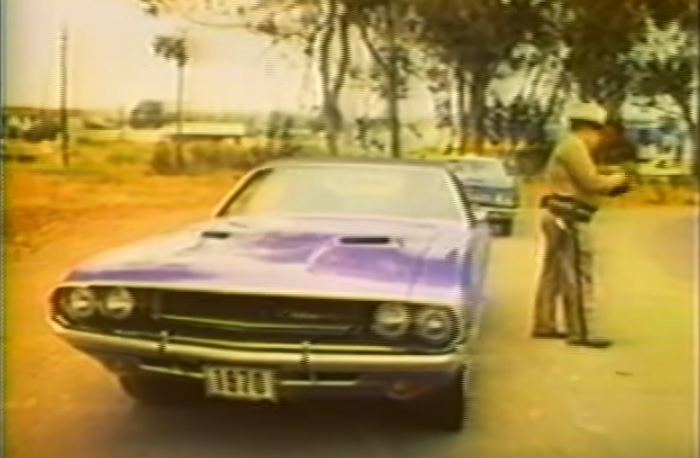 The Dodge brand showcases its history better than any modern brand in the US market, with classic colors, classic trim names, classic packages and even some marketing campaigns that hearken back to the early days of the muscle car. From the Shaker hood atop a Hemi engine to colors like B5 Blue or Go Mango to the return of the Swinger and Super Bee models – Dodge has a tremendous amount of classic inspiration in the modern business plan. The most recent example of classic marketing in the modern era is the introducing of the Hi Impact Colors wrap for the Challenger, shown below.

However, with the likes of the Hellcat cars bringing many new faces into the Dodge community, a great many modern Challenger or Charger owners aren’t familiar with the history of the brand. Along similar lines, many late model Mopar owners haven’t seen the classic commercials from the Dodge brand, so as a lover of old school advertising, I will be showcasing some of those old videos for “Mopar Flashback Friday”. While they are likely to be Dodge-heavy, since Dodge has existed longer and had more popular advertising campaigns than the other Mopar brands, we hope to include some classic Plymouth and Chrysler ads in the mix as well. 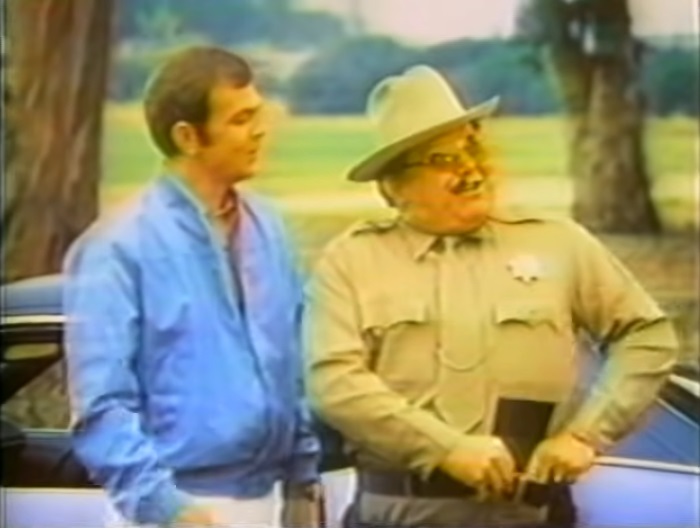 To kick off the series, we have what many consider to be the most recognizable classic Dodge advertisement. In fact, this 1970 Challenger R/T commercial might be one of the best known classic muscle car commercials from any brand; introducing us to Sheriff J.W. Higgins. Sheriff Higgins would go on to star in a handful of Dodge commercials as the “Dodge Safety Sheriff” and the “Sheriff of Scat City”. His role in this initial commercial preceded very similar characters in some popular movies, including Buford T Justice in Smokey and the Bandit and J.W. Pepper in the James Bond movie Live and Let Die – both of which are rumored to have been based on the Dodge Safety Sheriff.

In any case, the commercial below introduces us to Sheriff Higgins and the all-new 1970 Dodge Challenger R/T – which was so raced-up that a good’ol boy sheriff confused it for a race car.

The commercial below begins with the Plum Crazy 1970 Dodge Challenger R/T being pulled over by a police officer. The officer – Sheriff J.W. Higgins – instructs the driver to get out of the car because he is in a “heap of trouble”. The driver steps out of the car and asks what he did wrong, to which the sheriff replies that he violated the ordinance 11-14 for “operating a racing type vehicle inside of city limits”.

The driver is quick to point out that the new 1970 Dodge Challenger R/T is not a racer, at which point the sheriff begins to ask questions. When the driver points out the Polyglas GT tires, the officer calls them racin’ tires. When they move around to the rear of the car, the officer points out the racing stripe around the tail end and when he opens the hood, he jokes that it is a “reconverted lawn mower motor” – to which the driver replies that it is actually the optional 440 Magnum V8.

After discussing the Slap Stick “racing shifter”, the driver points out the key components that make his 1970 Dodge Challenger R/T a proper street car, including concealed windshield wipers and dual headlights, but Sheriff Higgins simply warns him that he can be booked for “sassin a law officer”. 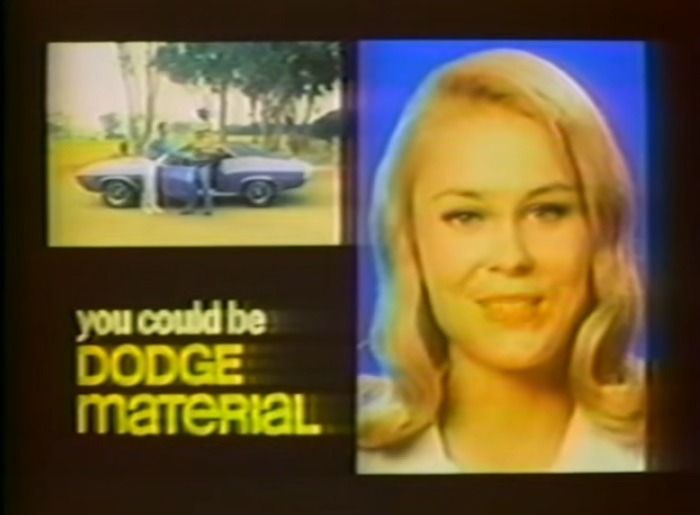 The commercial ends with the blonde spokeswoman who would end many commercials during this era, explaining that “if you can handle the way that people react to your 1970 Dodge Challenger, you could be Dodge material” – followed by Higgins final line of “now look boy, I know a race car when I see one”.