The first 3.0 liter engine was made by Mitsubishi, which was originally intended to become part of Chrysler. The company did not have a V6 engine at all until the Mitsubishi acquisition was deemed unlikely to ever happen; then they started working on a 3.3 liter V6. They used a pushrod design for low cost and simplicity; the 3.3 turned out to be extremely durable and was roughly as efficient as the Mitsubishi engine. The 3.0, incidentally, was also quite durable, other than an issue with the valve seals which Chrysler finally helped Mitsubishi to stamp out. 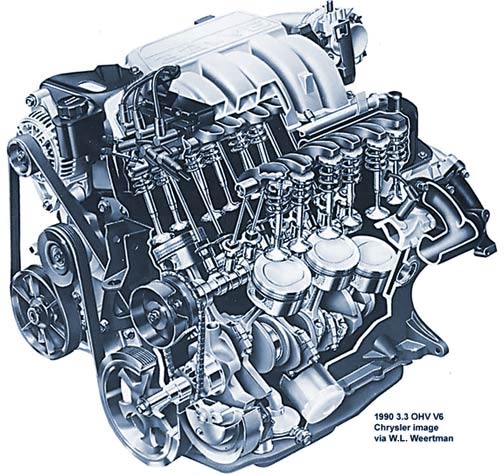 Along the way came the 3.9 liter engine, based on the company’s V8 series; it was created solely for the Dodge Dakota, and while it was a mildly rough engine due to the V8 V-angle, with an automatic transmission to soak up the vibration, it was satisfactory enough. The 3.7 liter engine, meanwhile, had been in development at AMC as an inexpensive but capable replacement for the old 2.5 liter four-cylinder; while a new 4.7 liter V8 was the replacement for the ancient AMC 4.0 liter straight-six. These took a while after the AMC takeover to appear in trucks (they were never designed for, or used in, passenger cars, just Jeeps and pickups).

The 3.8 liter engine was created to provide more power for the company’s more expensive cars, including the Imperial; it was basically a longer-stroke version of the 3.3, and did not add much in the way of technology. This engine was satisfying in minivans, thanks to its high torque, but the long stroke meant added fuel consumption and less ability to turn high revs. Both the 3.3 and 3.8 continued for many years in minivans, though the 3.8’s time in passenger cars was fairly brief; and the 3.8 also ended up in Wranglers for a short time.

The 3.5 liter engine was instigated by Francois Castaing, as a more technologically savvy version of the 3.3; he felt it was needed not just because the company needed a more powerful six (which it did), but because they needed to prove they were not behind the times in engine tech. The 3.5 was loosely based on the 3.3, but with an overhead cam design, which changed the heads. The first edition was good for 214 horsepower, which for 1993 was quite impressive; the next iteration brought it to 250 horsepower, which is roughly where it stayed through the end of its life.

With the second generation LH cars came two new engines, the 3.2 liter version of the 3.5 V6 and a 2.7 liter version which used twin overhead cams (these came out in 1998). Meanwhile, Mitsubishi had been upgrading their old 3.0 liter engine, and produced a 2.5 liter version with about the same power output but better mileage and a smaller package. 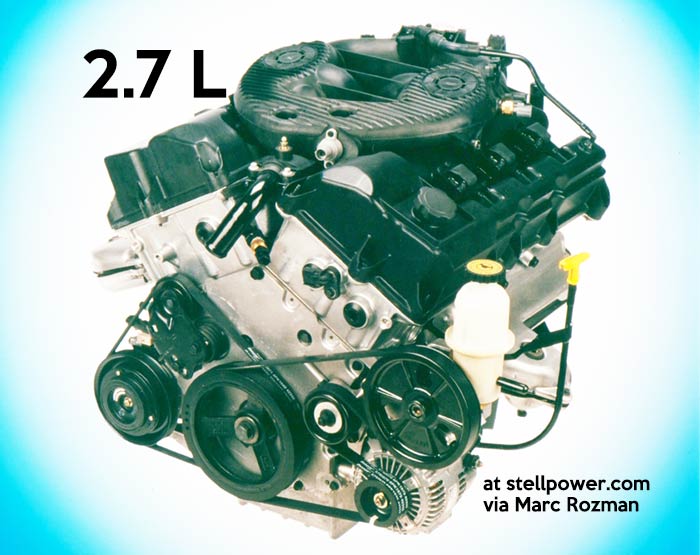 Chrysler used the various engines depending on cost (the 3.0 was fairly inexpensive, and handy for minivans, for example), marketing (the 3.5 was not used in minivans because Marketing was afraid of confusing buyers by having a more powerful, yet smaller, engine), and other engineering. Mitsubishi-made cars had Mitsubishi V6 engines. Most Chrysler-made cars had Chrysler engines. The Dodge Stratus sedan was a Chrysler design; the Dodge Avenger coupe was a Mitsubishi. Confusing matters, the company’s own midsized cars used the Mitsubishi 2.5 liter V6 until the 2.7 liter engine was ready, partly because it fit under the low hood; the 3.3 was too tall for these cars.

The 2.7 liter V6 was, in the words of Walt McCrystal, “an industry benchmark engine that Chrysler was committed to getting right.” The company published one of their rare power-and-torque charts (above), showing that the 2.7 was clearly a winner as revs climbed, vs the outgoing 3.3; with its short stroke, the 2.7 was also engineered to rev much higher, so it was just getting started as the 3.3 had to stop at 5,200 rpm. Compared to its larger predecessor, the 2.7 had nearly 40 more horsepower, and a tad (7 lb-ft) more torque. The 3.3 was certainly more torquey in the low revs, below 3,400 rpm or so, but the 2.7 would keep running past the 3.3’s redline. That made the 2.7 ideal for cars, and the 3.3 better for the big, heavy minivans.

How good was the 2.7? In the 1998 cars, it had more horsepower than the pricier Acura 25TL or Nissan Maxima, and matched the more expensive Ford Taurus. The 3.2, meanwhile, beat the Taurus, Cadillac Catera, and the 1997 3.5 liter LH cars. The new 1998 version of the 3.5 liter V6 was far higher than any of these other engines, which topped out (for the non-Mopar versions) at 200 horsepower. What’s more, the Acura, Catera, and Diamante all required premium gas; the 3.5 took midgrade (89 octane), and the 2.7 took regular.

Unfortunately, oil sludging on early versions gave the 2.7 a bad name among the public and many mechanics—the same problems that afflicted numerous engines from other automakers, even Toyota. Walt McCrystal, though, pointed out that these early problems were largely resolved. “I would have no qualms against owning a 2.7 with the improved hardware. The head gaskets and bottom-ends held up well. I remember seeing (coolant) heated PCV systems on Canadian and cold climate cars to prevent PCV icing. The water pump went through a number of revisions, including a weep hole to dump coolant outside the engine, instead of into it. By 2003, it was a fine engine as it was intended to be.”

The 3.2 liter engine was eventually dropped as it was not well differentiated from the smaller 2.7 and the larger 3.3 and 3.5.

One reason for still using Mitsubishi engines at this point was (according to Ed Poplawski) that, as Chrysler started phasing out their use, Mitsubishi wanted minimum-production guarantees—around 300,000—to keep the factories profitable. “The production engine people busted their butt to fix all the problems,” Ed recalled. Finally, the contracts ran out and the rebadged coupes were dropped, and the Mitsubishi engines disappeared completely.

Finally, in the waning years of the Daimler occupation, Chrysler created a larger-displacement of the 3.5 liter engine to catch up to more powerful Honda and Toyota minivan engines; the new 4-liter V6, in its second year paired with a six-speed automatic, earned Chrysler the “most economical minivan” title, but something new was on the way. The Phoenix Engine, as it was originally coded, arrived as the Pentastar V6, and it swept all the past V6 engines out.

The Pentastar, made in three sizes (more were originally planned), was state of the art in technology and performance alike; it generated considerably more power than any of the past Mopar V6 powerplants, and did so with fine fuel economy and, reportedly, an attractive cost. Aside from sludging (and valve guide seals on the Mitsu), all these V6 engines had been quite reliable; and after some relatively rare issues in its early days, the Pentastar was, as well. It was also quieter than the past V6 series, which it quickly swept away.

The three Pentastar engines, used by Ram, Dodge, Chrysler, and Jeep alike, had three sizes: the normal 3.6 liters, a 3.0 liter version for Europe (to avoid higher displacement taxes), and a 3.2 solely for the Jeep Cherokee. The basic design was adapted by Maserati for its Quattroporte and Ghibli. This engine remains in production as the sole gasoline V6 used by Chrysler, Dodge, Jeep, and Ram; and is available in modified form with plug-in and mild hybrids.