Over the past two days, several automotive media outlets have shared a story about a Dodge Charger SRT Hellcat with a badly broken front wheel. While quite a few outlets have written about this car, literally no one has reached out to the owner of the Charger in question. Fortunately, I happen to know the owner from the Hellcat community and today, I bring you the full details on the Hellcat Charger with the big wing and the broken wheel. 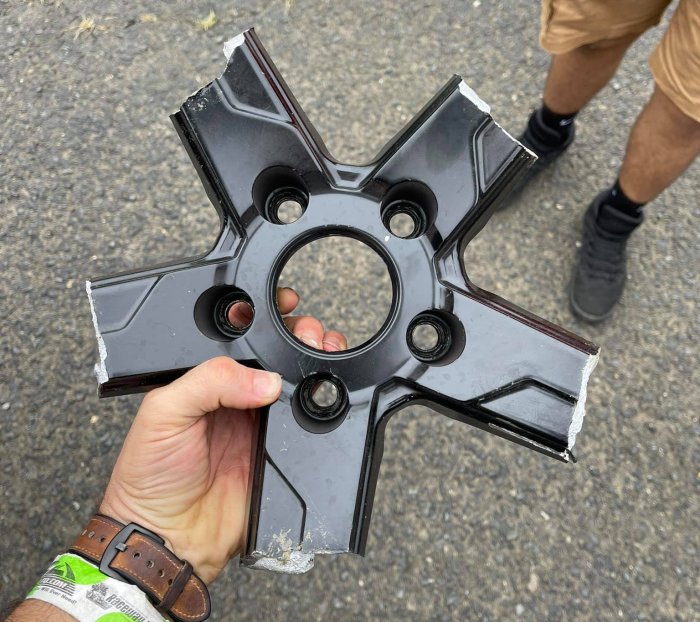 The Dodge Charger SRT Hellcat shown in the pictures here is owned by Onur Can. I have known Can for a few years now from the SRT Hellcat and Demon Group and the Modern Mopar Road Racing – AutoX – HPDE Group on Facebook. While I know many Hellcat owners who drive and race their cars hard, few people share as much information about the racing efforts as Can.

As you might expect, building a street-friendly Dodge Charger SRT Hellcat that is also a beast on the drag strip is no simple task, so Can shares all of his experiences – good and bad. When he added the extreme aerodynamic bits, including the massive rear wing and the canards up front, he shared pictures in the various Facebook groups. Those who didn’t understand why he needed such dramatic aero made jokes about it being too much, but a short time later, he shared his positive results from the track with the aero upgrades. 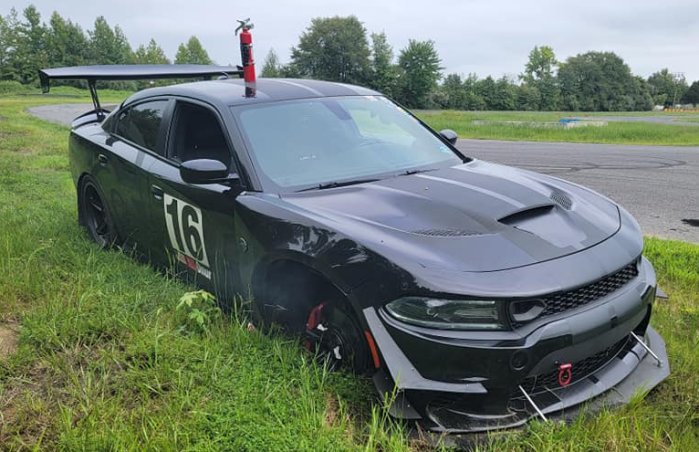 At the same time, when Onur Can has a bad day at the track, he posts all of the details about that online as well. He is surely one of the most open, honest racers I have met online, as he understands that sharing both good and bad experiences may help others who are trying to go road racing with a Hellcat Charger. Over the past few years, he has shared all sorts of parts that he has broken as a result of road racing, but none of his issues in the past have captured the attention of the community as a whole as much as his broken wheel.

Back on August 29th, Onur Can posted the images shown here in the Hellcat and Mopar road racing groups with the following message:

“After 4 years of racing I had my first incident. Wheel broke at the end of the straight right before the turn. I’m ok. Need a new fender though.” 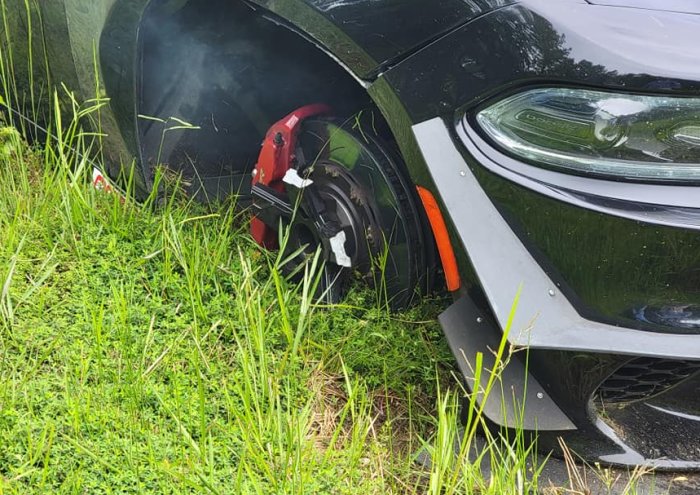 On August 31st, media outlet The Drive posted an article using Can’s images to discuss the importance of buying quality parts for a track car. The outlet cited a company that sells wheels on Facebook, but the outlet didn’t bother to do any research before writing a piece packed full of bad information. Can went so far as to share some details in that original Facebook post by the wheel retailer, but still, none of the other outlets that chose to publish his images and story reached out to him to actually get the real story…so here is the whole story from Onur Can.

What Broke the Wheel?

When Onur Can began road racing his heavily modified Dodge Charger SRT Hellcat, he spent more than two years on a set of 2018 Challenger Demon replica wheels that weren’t very expensive. Since Can pushes the car so hard on the track, he asked the road racing community for input on a set of wheels to use specifically for road racing. He was directed to a wheel retailer and after Can explained that he would be using these wheels specifically for road racing on a Hellcat Charger. The retailer recommended a set of wheels that he said were “rotary forged”, which Can understood to mean that they are forged construction, but he understands now that is not the case. Can sent me screenshots of the discussion between himself and the retailer, and the retailer definitely marketed the wheels shown as being forged wheels. 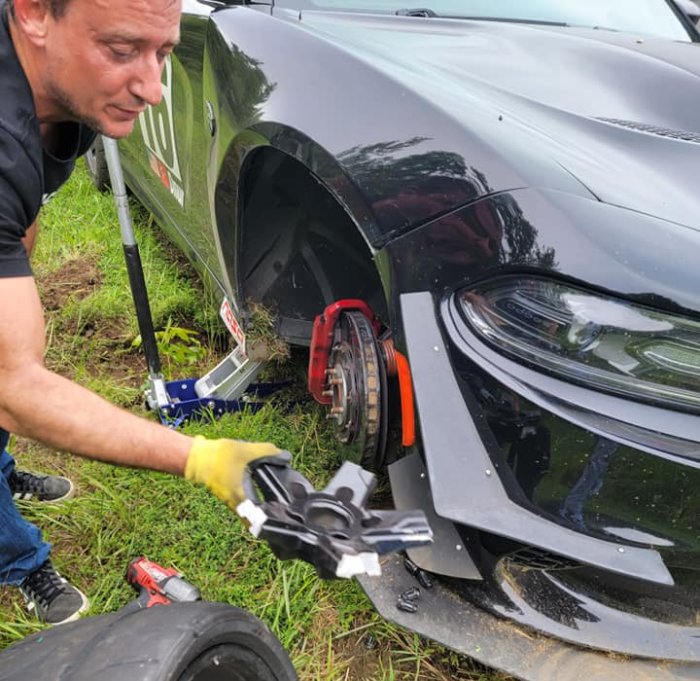 Anyways, the wheels showed up and Can had his Toyo R888R track tires mounted on the wheels which were sold to him by a retailer who knew that he was going road racing with them. Can spent countless days over the course of two years racing with the Dodge Demon replica wheels, but on the 4th time to the track with the wheels shown in the picture – the passenger’s side front wheel failed dramatically.

As he rocketed down a long straightaway and hit the brakes for the upcoming left turn, Can heard a loud bang from the front end. He then saw his right front tire shoot out away from the car and his the outside wall. Luckily, Can was able to keep the car under control after losing the right front wheel in a left-hand turn, running into the grass but staying off of the tire wall. 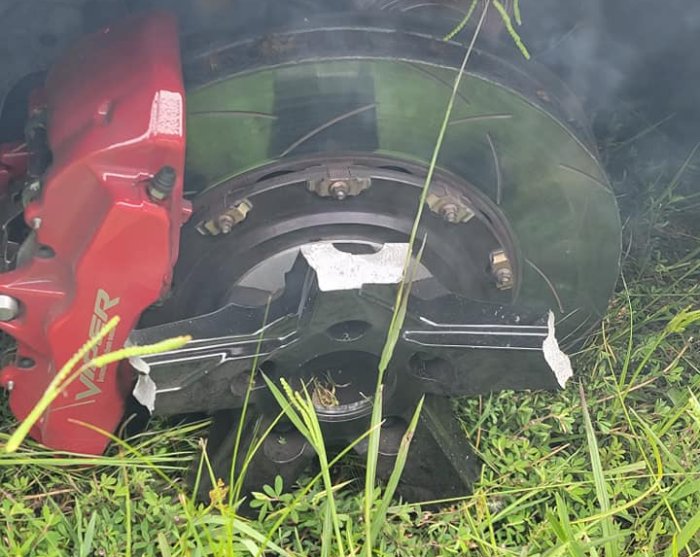 Contrary to what the initial reports said, there was damage beyond just the wheel. The wheel barrel and tire appear to have made contact with the fender on their way out and when the Charger hit the soft ground next to the track and bottomed out due to the lack of a right front wheel, there was more damage done to the fender and the lower rocker panel. 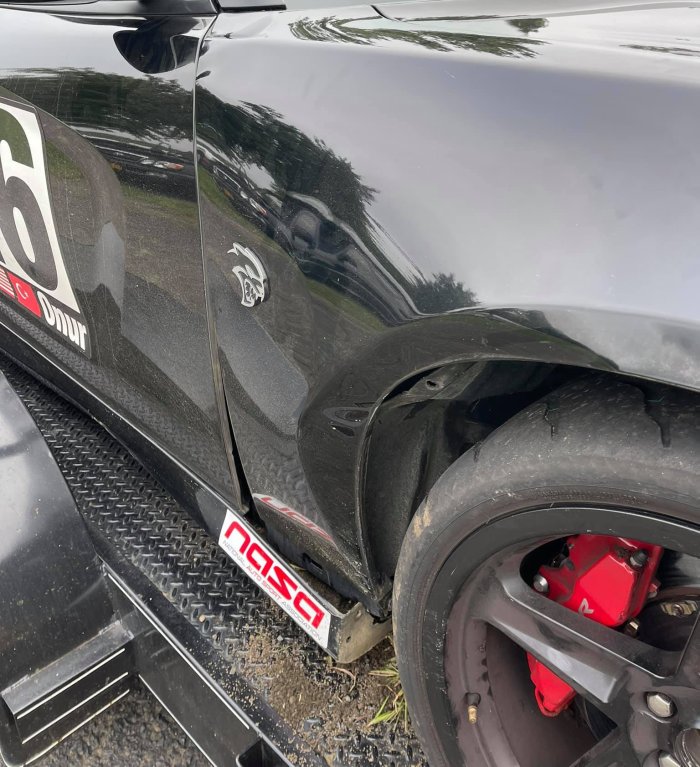 Of course, he came home and shared the pictures of the whole incident and that was what lead to the many articles written without gathering any information. This wasn’t an issue of someone buying cheap wheels. This was an issue of someone being told that they were buying forged wheels that would withstand the abuse of road racing in a Hellcat Charger, which clearly isn’t the case. In fact, Can spoke with the wheel manufacturer and the company immediately said that they would not recommend the wheel in question for road racing in a Hellcat Charger.

Fortunately, Can has been contacted by wheel companies who are looking to help him get a proper setup for road racing in a Dodge Charger SRT Hellcat. 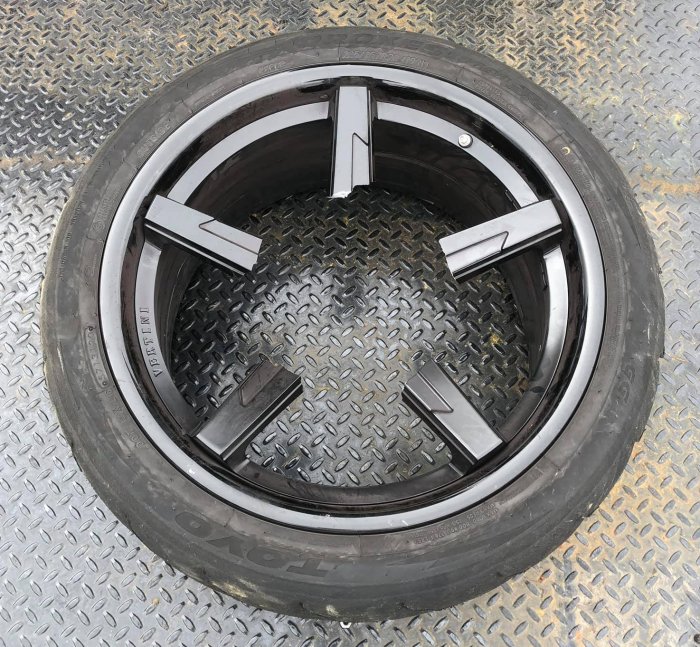 I have not included the name of the wheel retailer, the company that produced the broken wheel or any of the companies that he is working with going forward because my goal isn’t to bash or promote any of the wheel companies or retailers in question. My goal was to share the real story and point out that Onur Can is not someone to “cheap out” on parts for the race track and his extensive list of modifications shows that he doesn’t mind spending money to go fast. Unfortunately, a salesman used marketing terminology to sell him wheels that weren’t designed for the sort of abuse that Can’s Charger hands out and in the long run, we are all happy to see that Can was able to keep his car off of the wall and himself free from harm.

While many outlets are pointing their finger at Onur Can for not buying the proper wheels, none of those outlets did any actual research before reporting a story. Can learned his lesson – hopefully those outlets will, too. 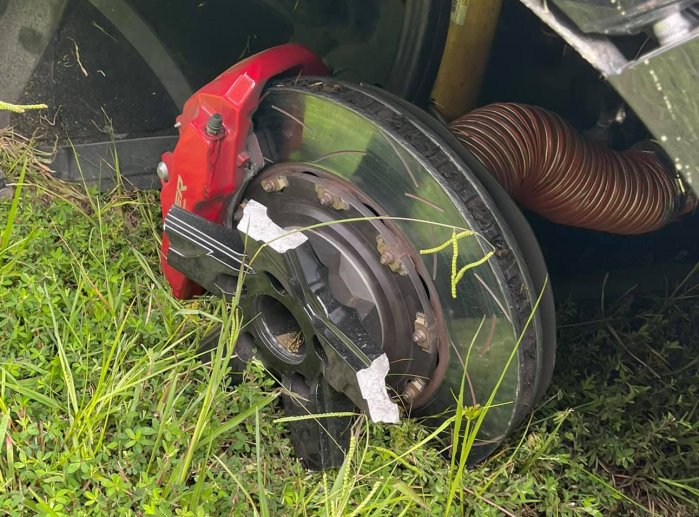 For those curious, we have included the modification list of Onur Can’s Dodge Charger SRT Hellcat below. If you want to see more pictures or follow Can’s road racing progress going forward, you can do so at his Instagram account by clicking here.