Mopar’s supercharged Hellcat V8 has beaten 800 horsepower, while other automakers are still chasing the original 707 horsepower rating. At the same time, new battery-electric cars (BEVs) run sub-3-second 0-60 times, and Dodge has promised the world’s first full battery-electric muscle car; the new large-car platform promises 500 miles of range. But which do our readers want? 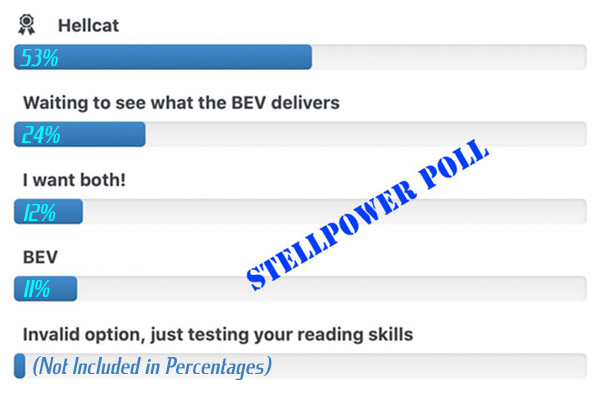 Our poll shows a clear preference for the Hellcat, with 53% of several hundred participating readers—more than half—wanting a Hellcat over an upcoming BEV muscle car. However, around one quarter are waiting to see the BEV before making a decision, and 12% want both (this number may have been higher, but it was not available for several hours). Just 11% selected a BEV.

“Invalid option” was selected by a handful of people, but was mostly used to test the poll under different conditions when we had some early technical glitches.

What does this mean for Dodge? It’s a rather unscientific poll, and quite a few of the respondents are Dodge muscle car enthusiasts, who are more likely to prefer the Hellcat than the general public (which often doesn’t even seem to know that it exists). The fact that 21%, or a fifth of the respondents, would choose the BEV or both is encouraging for Dodge, depending on the production they are targeting—and chances are they are not going to try for 100,000 sales per year with the first model. Given the usual teething problems, a very slow ramp-up would probably be better in the long run. Add to that 24% of the respondents who are waiting to see what’s offered, and you actually have a pretty good market for an upcoming BEV—and a good rest-of-life for the Hellcat cars.