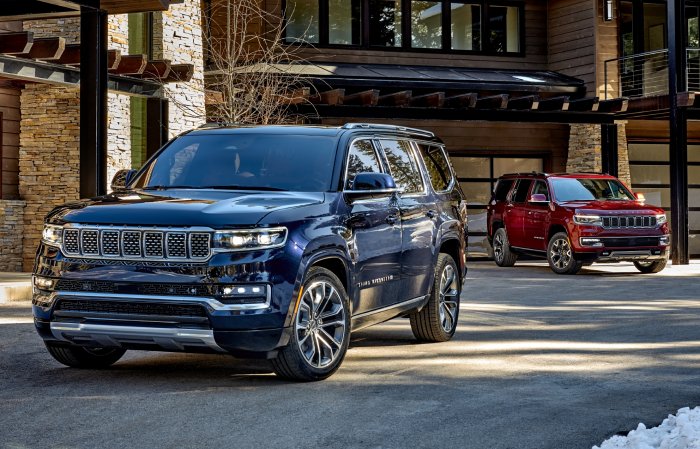 Where the new Jeep Wagoneer and Grand Wagoneer differ is in their standard features, optional features and engine offerings. As a result, the Wagoneer will compete with the likes of the Chevrolet Suburban and the GMC Yukon XL in the large SUV segment while the Grand Wagoneer will compete with the Cadillac Escalade and the GMC Yukon Denali in the premium luxury SUV segment. 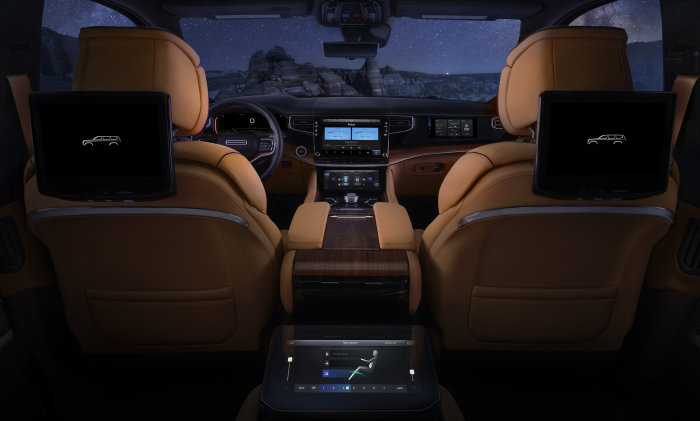 “We are ready to start a new exciting adventure with a model that wrote some of the most iconic pages in the history of the American automobile,” said Christian Meunier, Jeep Brand Chief Executive Officer. “Wagoneer and Grand Wagoneer are born from the Jeep brand, but they have a flair of their own, building on a rich heritage of craftsmanship and refinement, while offering new levels of sophistication, comfort and legendary 4×4 capability, as well as a new level of customer service.” 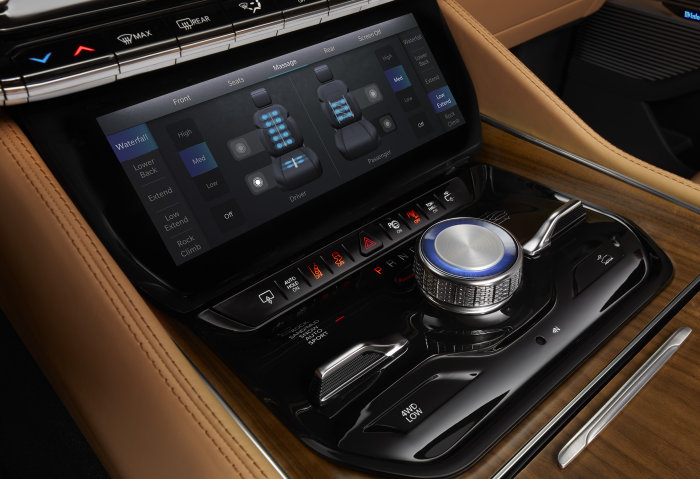 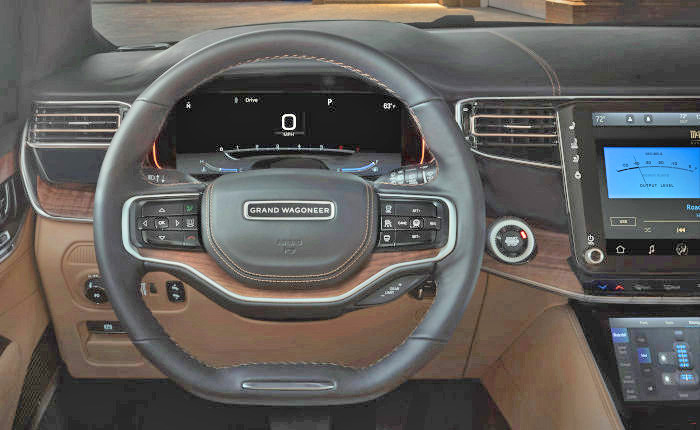 When the 2022 Jeep Wagoneer (shown here in red) goes on sale later this year, it will be offered in Series II and Series III trim, with Series I arriving later on. The Grand Wagoneer (shown here in gray) will be offered in Series I, Series II, Series III and Obsidian trims. The two are both full-sized, four-door, body-on-frame large SUVs with seating for 7 or 8 depending on the seating configuration. The two looks fairly similar on the outside as well, with subtle styling, lighting, trim and wheel differences. 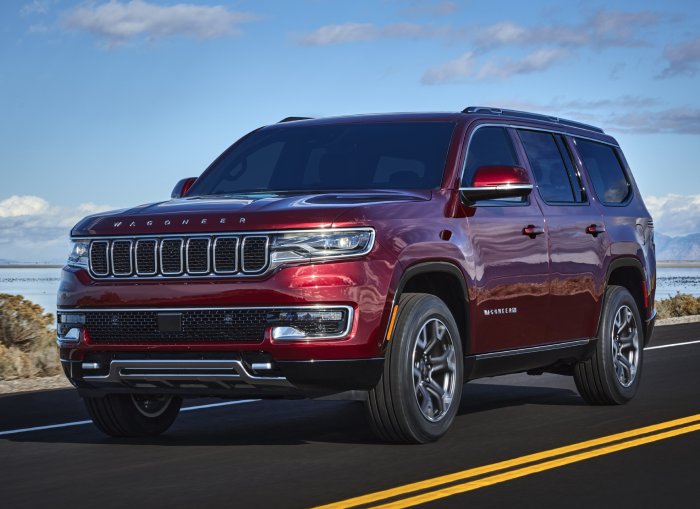 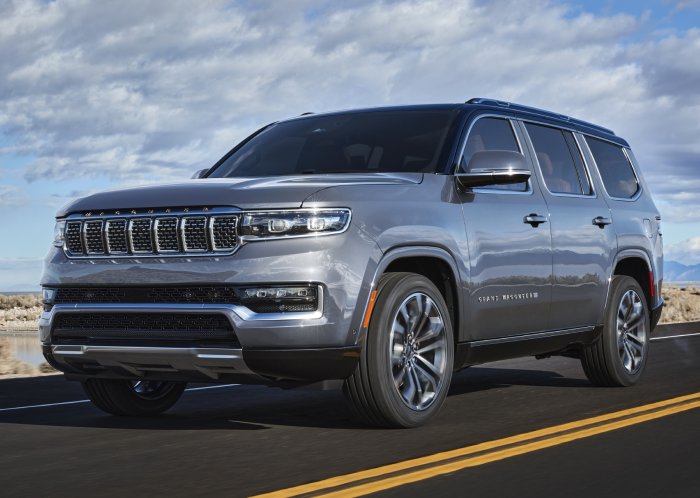 Every trim level of the Wagoneer and Grand Wagoneer at launch comes standard with LED headlights, daytime running lamps, fog lights and taillights, but sadly, the trick LED trim that runs across the grille and down between each grille slot didn’t make it to production, nor did the backlit badging from the Grand Wagoneer Concept. 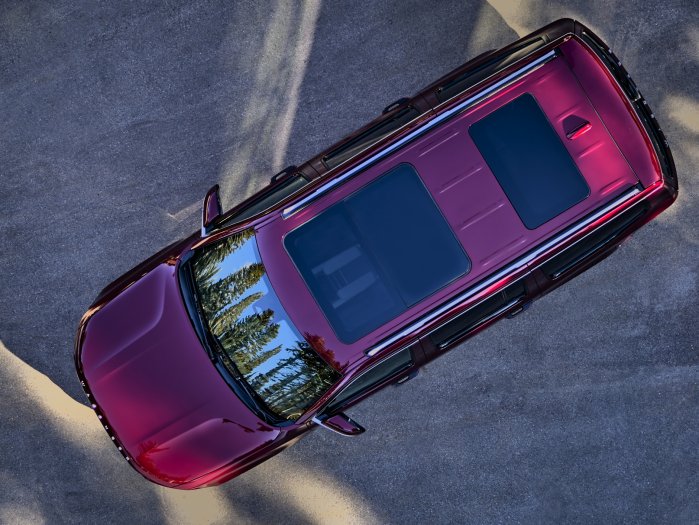 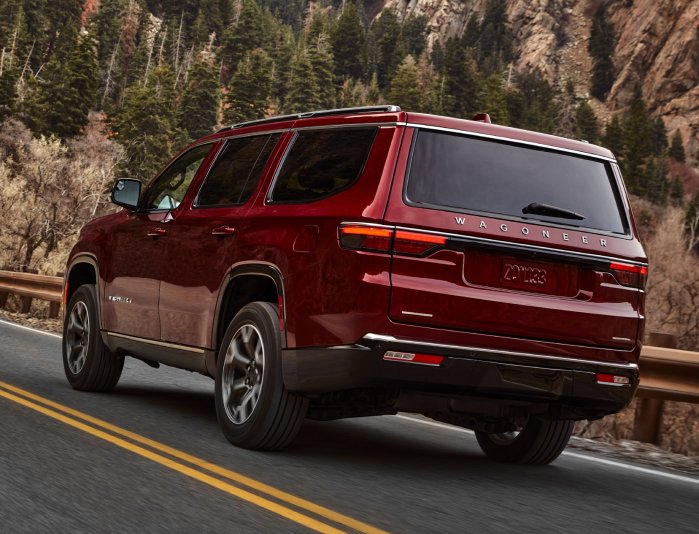 The 2022 Jeep Wagoneer and Grand Wagoneer models that will go on sale later this year all come with standard leather-wrapped seats for either 7 or 8 people, depending on the seating package chosen. 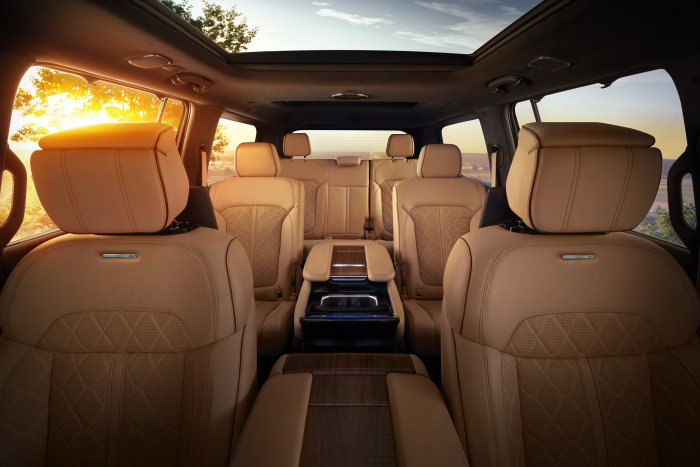 Wagoneer Series II and III come with Nappa leather seats from front to rear, with heated, cooled and 12-way power adjustable front seats and standard 60/40 split bench seats in the second and third row leading to seating for 8. Wagoneer buyers can opt for heated captain’s chairs in the second row, which reduces the passenger capacity to 7 people. 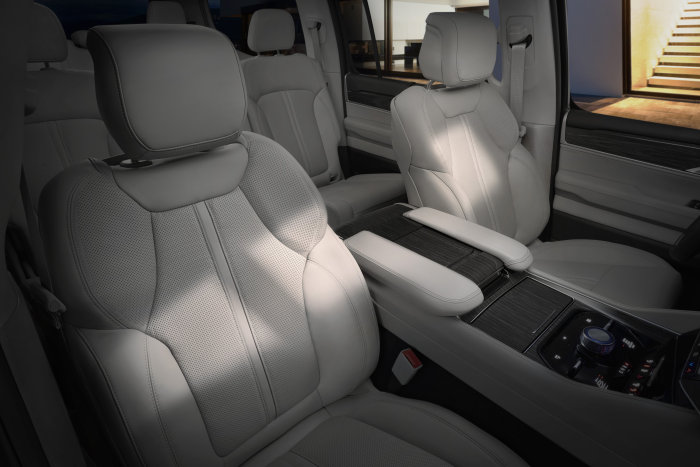 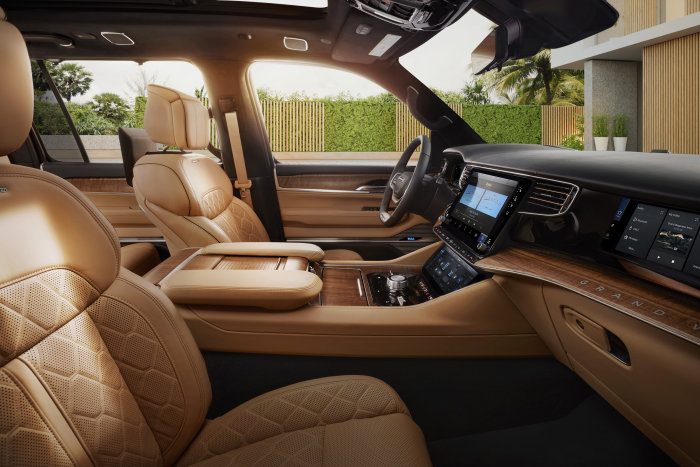 Next, both the Wagoneer and Grand Wagoneer come with a long list of high tech interior features, but there is a distinct difference in the systems offered by the two big Jeeps. 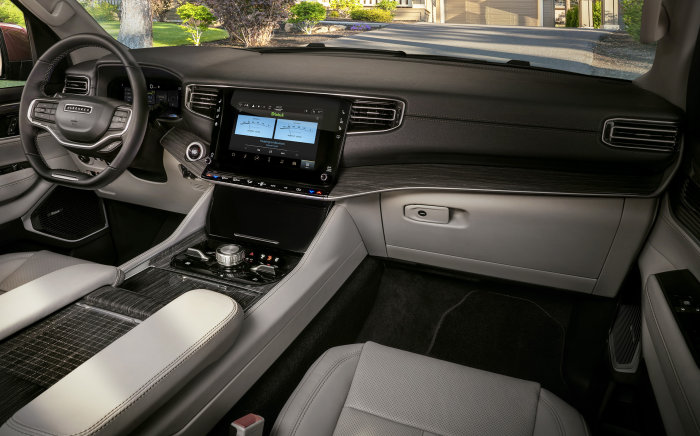 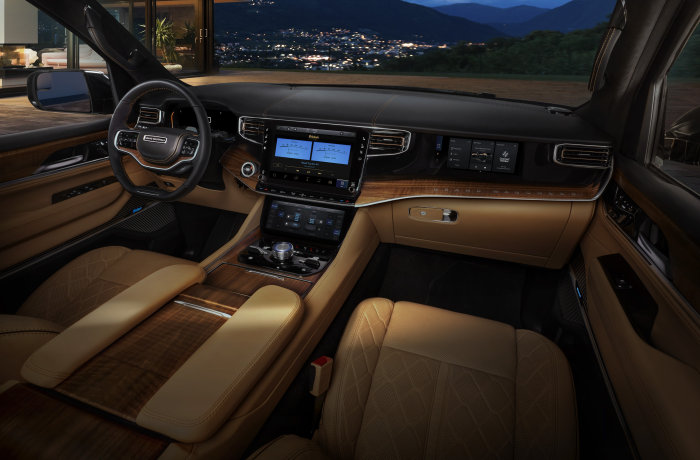 Next, the 2022 Wagoneer comes standard with a 9-speaker Alpine sound system, but Series III buyers can opt up to the 19-speaker, 950-watt McIntosh MX950 sound system. That 19-speaker system is standard in the Grand Wagoneer Series I and II, while the Series III and Obsidian models come standard with the segment-leading the 23-speaker, 1,375-watt McIntosh MX1375 sound system. The MX1375 system is also optional on the Grand Wagoneer Series II, so the vast majority of “grand” models will come with the grandest sound system in the SUV world. 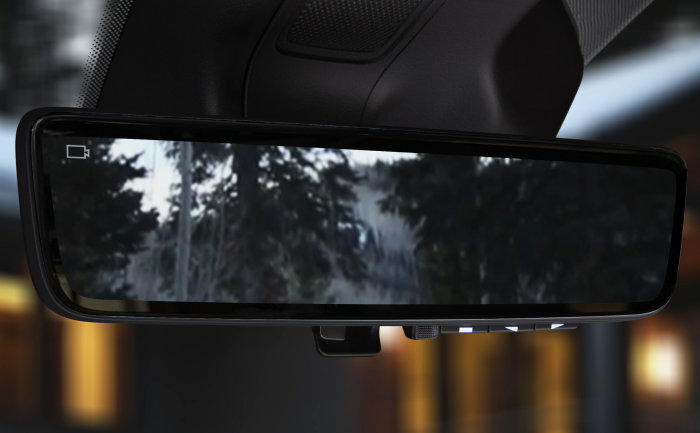 Finally, some other features of both the Wagoneer and Grand Wagoneer include a leather-wrapped steering wheel with controls for the infotainment system and the driver information center, the Media Hub with up to 11 USB ports, two 12-volt power points, Remote Start, Keyless entry, a digital rearview mirror, a 115-volt power point, Navigation, SiriusXM radio and TomTom traffic. 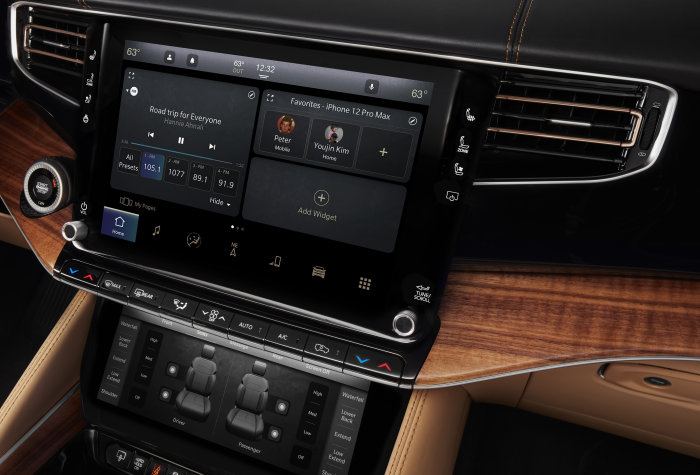 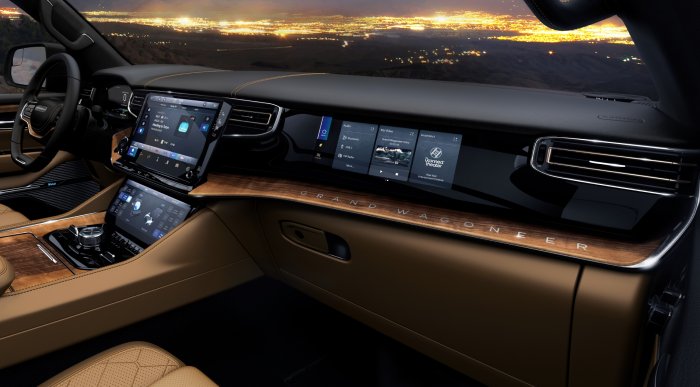 Leading up to the introduction of the 2022 Jeep Wagoneer and Grand Wagoneer, there were reports citing unnamed “sources” stating that the engine lineup would include a hybrid Pentastar V6, a hybrid GME turbo-4 and the 5.7-liter Hemi in both traditional and eTorque form. Those reports were almost completely wrong, as only one engine from those reports will actually be offered when the vehicles go on sale later this year. It kind of makes you wonder where those outlets found their “sources”. 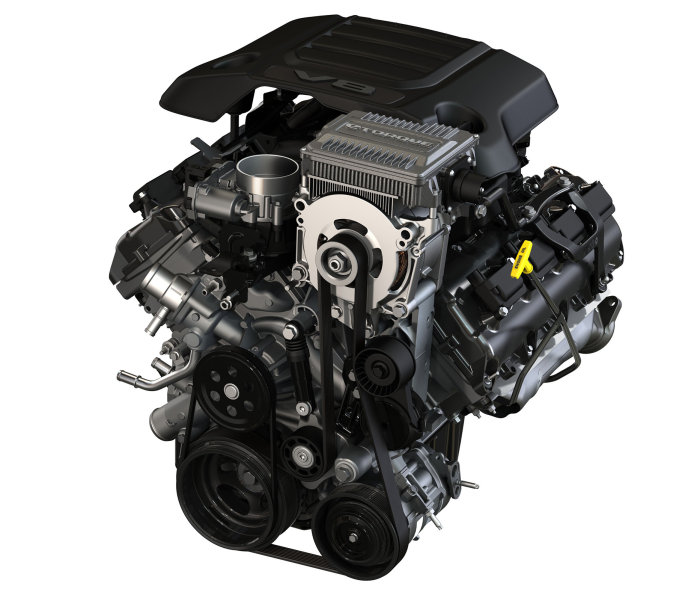 The 2022 Jeep Wagoneer will be offered with one engine at launch – the 5.7-liter Hemi eTorque V8 with 392 horsepower and 404 lb-ft of torque. This engine is available with rear- or four-wheel-drive and the ZF 8HP75 8-speed automatic transmission is standard with either drivetrain configuration. There are two four-wheel-drive systems offered with the 5.7-liter engine, starting with the Quadra-Trac I single-speed system followed by the Quadra-Tech II two-speed system. Coil springs are standard on Wagoneer models, but the Quadra-Lift active air suspension system is optional and Selec-Terrain traction management system is standard. The Wagoneer in either drive configuration has a maximum towing capacity of 10,000 pounds. 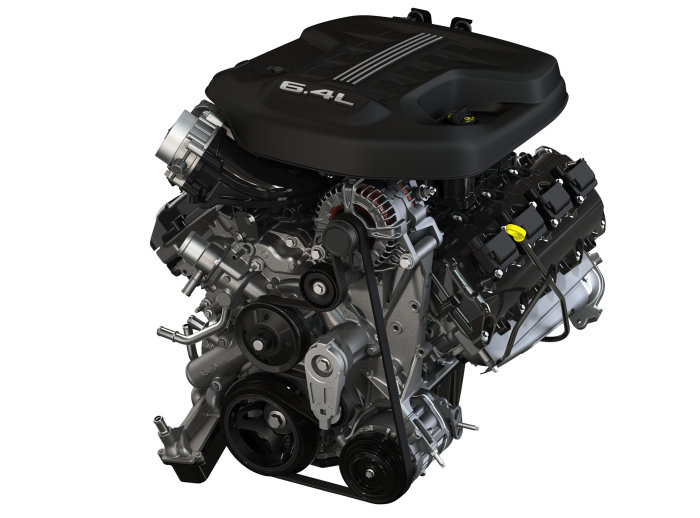 The engine of the 2022 Jeep Grand Wagoneer is the most surprising aspect of today’s announcement. While the Grand Wagoneer Concept was a plug-in hybrid, the production version is only offered with the 392-cubic inch Hemi V8. This is a similar V8 to that featured in the Grand Cherokee SRT, with the new Grand Wagoneer benefitting from 471 horsepower and 455 lb-ft of torque. The SRT name isn’t used anywhere in the press release, but the Grand Wagoneer basically comes with standard SRT power and we love that. The Quadra-Drive II four-wheel-drive system is standard on all Grand Wagoneer models, as is the active Quadra-Lift air suspension system, the Selec-Terrain traction management system and the 8HP75 8-speed automatic transmission, helping the big SUV sprint from a stop to 60 in just 6 seconds. The Grand Wagoneer can tow up to 9,850 pounds. 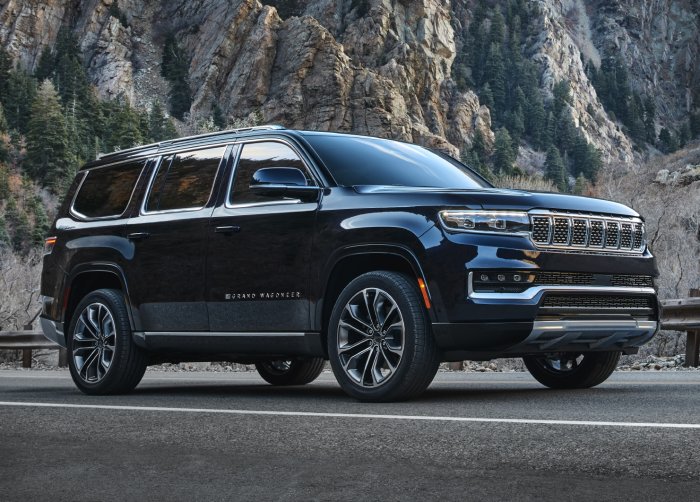 
Every Jeep Wagoneer and Grand Wagoneer buyer will benefit from a unique VIP helpline via the Wagoneer Client Services program. This service includes five years of worry-free dealership maintenance including oil changes and tire rotations, 24/7 concierge support and roadside assistance via phone or online chat, a no-charge equivalent service loaner, trip interruption coverage, VIP access to select and exclusive events, interior and exterior vehicle cleaning and a full tank of fuel when serviced, vehicle pickup and delivery for service and complimentary WiFi and phone charging station during servicing. 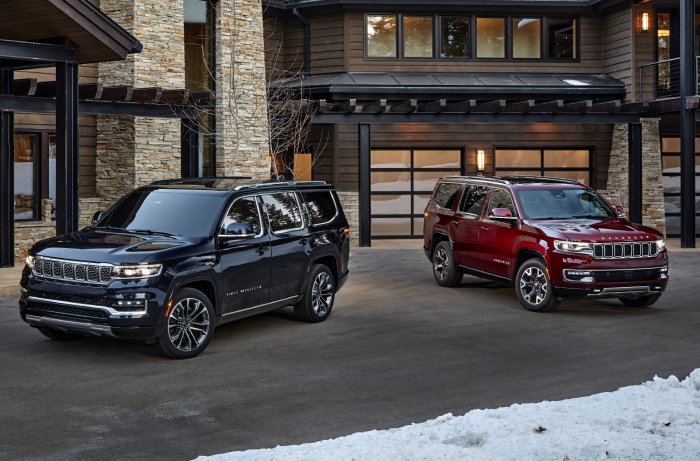 Anyone interested in reserving one in advance can do so by placing a $500 down payment through the system on Wagoneer.com. Once you are signed up and paid, a concierge team member will reach out to initiate the order process, provide vehicle updates and assist with any dealer interactions as you prepare for delivery. 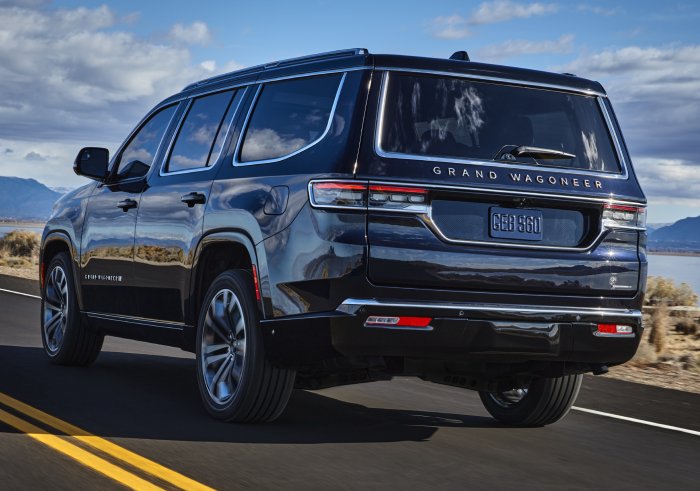