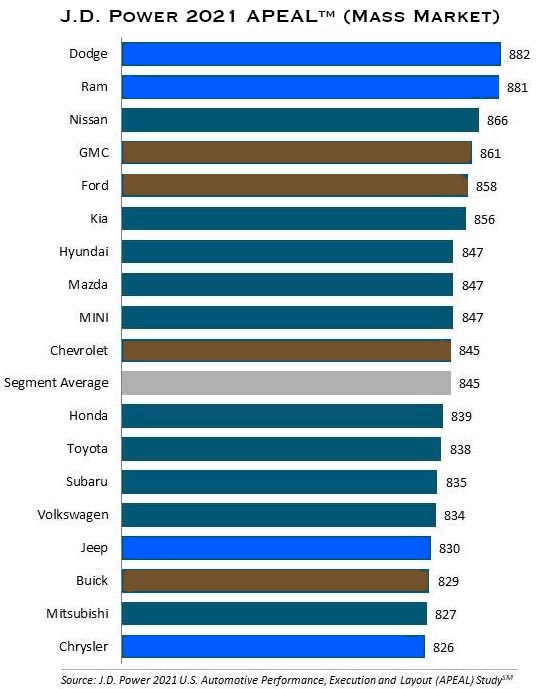 Dodge has, for the second year in a row, topped the mass-market brands in J.D. Power’s APEAL™ study, which looks at the “emotional bond” between customers and their vehicles after three months of ownership. The surveys are placed on a thousand-point index; APEAL stands for Automotive Performance, Execution, and Layout.

In contrast to Dodge and Ram, as with the initial-quality survey, Chrysler was at the absolute bottom of the list, and Jeep was fourth from the bottom, albeit ahead of Buick and Mitsubishi, and possibly not significantly different from VW, Subaru, and Toyota, among others (J.D. Power does not reveal their standard deviation).

Honda and Toyota were both below average. On the premium rankings, Porsche edged out Genesis for the #1 position; Alfa Romeo was below average, though above Jaguar, Audi, Acura, and Infiniti, and Maserati was not on the list.

“I said last year that we would keep the throttle wide open, and these various results demonstrate our continuing resolve to do so,” said Mark Champine, Stellantis Head of Customer Experience, North America. “We remain on a mission to do better for our customers, and we know we have more work to do… Ours is a journey that never ends, because you can always do better.”

The overall top score from last year was garnered by Porsche, followed by Lincoln, Cadillac, BMW, and Land Rover. Dodge topped the mass market segment, followed by Ram, GMC, Ford, and Mini.  For 2021, Toyota was the biggest gainer, moving up five points. The only Mopar “best in class” car was the Ram 1500; while GM did not top the list, it had the most class winners (CT5, Blazer, Corvette, Tahoe, and Sierra HD).

The text and chart seem to disagree. I’ll take that out.

“Jeep tied for 8th…” Am I missing something, or is Jeep further down than that?