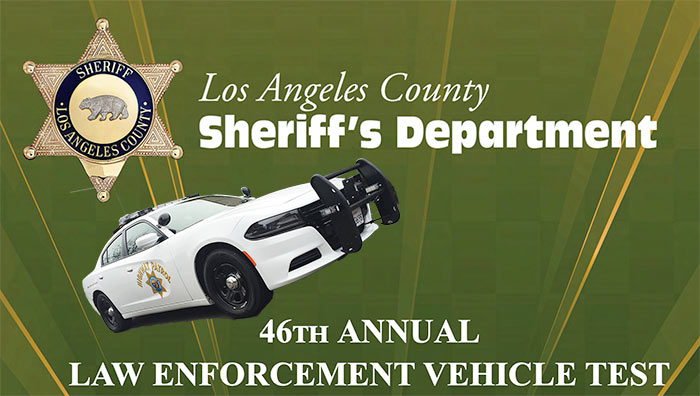 When Plymouth created the first police car package, it was a heavily upfitted sedan; and from then until the Jeep Cherokee “XJ,” nearly all police cars were sedans. In this year’s test of police cars, though, there was only one sedan entered, and it was a Dodge Charger.

The tests are somewhat incomplete, since the only pickup was the Ford F-150 “Responder” special service vehicle; the Ram 1500, 2500, and 3500 SSVs were all excluded, along with the Chevrolet 1500 SSV.

While the Tahoe was the most expensive vehicle in the test, and the sole GM entry, the LASD (Los Angeles Sheriff Department) had a hard time with it; with transmission temperature issues now resolved, the test drivers started having problems with brake fade.

As for Dodge, the all wheel drive version of the Charger Pursuit was rated higher in nearly every category than the lighter rear wheel drive model. Both had eight speed automatics.

The LA tests are designed for combined city and highway work, and unlike the Michigan State Police (MSP), the main focus is on city and suburban streets; the MSP tends to focus much more heavily on highways. The two departments’ tests are very complementary, and tend to pick different winners.

The Chargers did well in ergonomics, taking the top spot, followed by the Durango; the Chevy and Ford Explorer did not do very well.

The Ford pickup did extremely well in a straight line, and could store and tow more than the other vehicles; however, the Tahoe and Durango V8 did nearly as well in utility, with the Durango being much cheaper.

In communication noise evaluations, important in a working police car, the Dodges did best and the Fords did worst.

In the high speed course, the Tahoe did not rack up high marks, though braking earned a score of 10 when the issues had been resolved. The Charger V6 took scores of 9 in every category, including acceleration, while the Hemi mainly took scores of 8 with 9s in acceleration, driving performance, and body roll. The Durango V6 also racked up mainly 8s, with 7s in acceleration and transmission performance, and 9 in ABS/traction control; while the Durango V8 took all 8s, except for 9s in steering, braking, and ABS/traction control.

Among the midsize SUVs, the Durango V6 turned in an average speed of 33.3 with all 8s (except one 9); the Hemi raised the speed to 34.1 and it turned in mainly 9s, with three 8s. The base Explorer could not compete in time, with 32.6 mph—the lowest so far—but scored 10 in body roll and bounce and ABS/traction control, with mainly 9s elsewhere, and a 7 in acceleration. The turbo Explorer actually beat the V6 Charger’s speed, hitting 35.4 and making it the best of the entire field, garnering three 10s, six 9s, and one 8 in the subjectives. Finally, the hybrid had an average speed of 32.5 mph (the lowest of any vehicle) and ratings of 8 and 9 across the board.

The full report is at the LASD. Thanks to AHBGuru at Allpar for digging this out.