First, the very good news: Stellantis out-sold Volkswagen AG in Europe, to be the best-selling automaker on the continent in its first quarter as a company. That comes with the caveat that Volkswagen is likely to make a comeback, but Stellantis may still have some tricks in store, with (among other things) clever hydrogen technology that swaps fuel cells into battery space so a vehicle can be converted to both battery-electric and hydrogen-electric at the same time.

it was a very bad quarter for Dodge, as the Journey and Caravan have both been dropped—accounting for around 7,400 lost sales from the Journey and 23,000 for the Caravan. Those clobbered Dodge sales though the Durango posted a 15% gain, and the Challenger (+24%) and Charger (+6%) did well. One remaining Dart found a new owner, somehow.

You might think the Caravan and Journey leaving the lineup would help the Cherokee and Pacifica, but you’d only be a little right. The Journey lost 8,272 sales, and Cherokee was only up by 4,248, all of which could be accounted for by an industry-wide sales boost. Pacifica was up 40%, but that amounts to 9,817 minivans, while Caravan lost 23,222 minivans. The Pacifica still sells well enough to justify its continued existence and then some.

Toyota, by the way, sold 26,578 minivans in the same period, to Pacifica’s 34,342. It doesn’t look like Toyota will be beating Chrysler any time soon in the minivan market, but that’s still twice as many Siennas as they sold in Q1 2020.

Retail sales were very good, though, leaping up by 25% overall, with the Wrangler setting a new retail sales record; Alfa Romeo sales went up by 25%, with both Giulia and Stelvio posting hefty gains. All told, Alfa moved 4,646 cars during the quarter. Fiat dropped again, going from 1,128 to just 815, mostly because the 500 is gone. The Fiat 124 Spyder posted a healthy 23% gain as enthusiasts snapped up the last remaining new ones, as it has been dropped from the lineup.

Jeep saw an 8% gain; the Compass plummeted by 33% but still outsold the pricey Gladiator. Wrangler had a gangbuster month with a 25% gain in sales and Gladiator posted a 23% rise; Cherokee, as noted, rose by 13%, Renegade by 13%, and Grand Cherokee by 10% even with a replacement on the way.

Overall, it was a good quarter for Chrysler, Ram, and Alfa Romeo, an acceptable quarter for Jeep, and a bad one for Dodge and Fiat. It’s only fair, though, to note that the vehicle market was booming. Toyota posted a 22% gain for the quarter; most of Toyota’s gain was in trucks and minivans, with Sienna somehow having a 124% gain and Tacoma rising by 24%, while the old mainstay Camry and Corolla rose by 1% and 5%. Hyundai-Kia rose by 23%. Nissan even managed to rise by 11% overall.

On the other hand, GM posted just a 4% gain (less than Stellantis USA); and Ford eked out just a 1.0% gain. Stellantis had a strong retail and commercial-fleet quarter, but was somewhat hurt by the bottom dropping out of the rental-fleet business. Since there’s little profit in rentals, it may have been a very profitable quarter for the newly joined FCA and Peugeot. 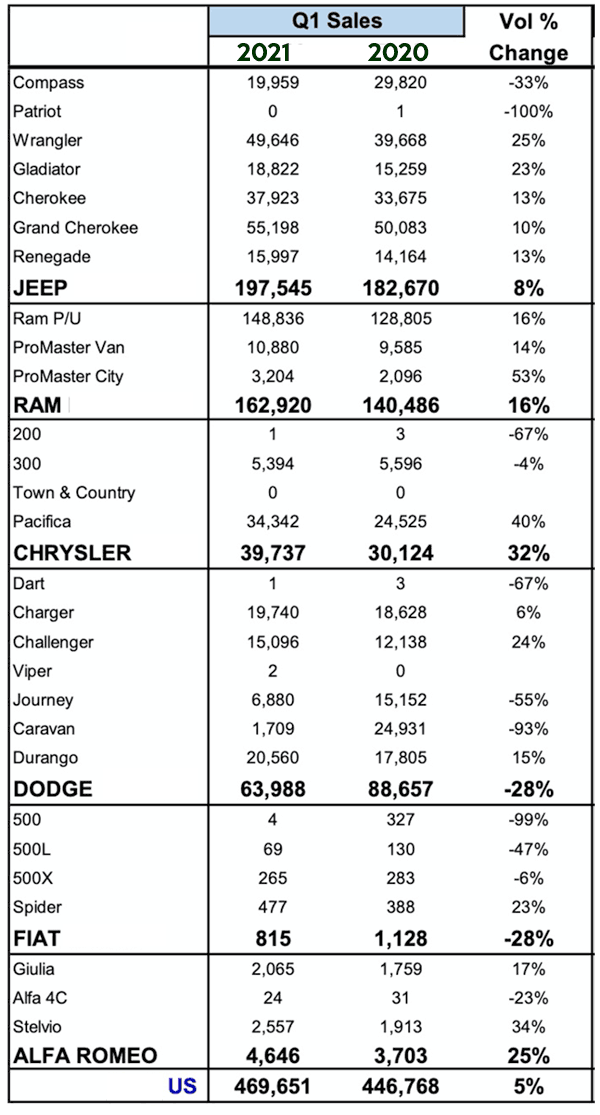 What about the Chrysler Voyager? Have they not started selling those yet?

I am pretty sure they are included with the Pacifica to prevent sales from being divided up. For years they had the issue of Dodge, Plymouth, and Chrysler all selling minivans so Honda or Toyota could be #1…

You did not mention the old hat 300 at all yet it managed to almost outsell 2 brands combined! Fiat/Alfa=5461 300=5394 despite them dropping the C level trim, and again no new anything, not one real tweek, I hope Stellantis see’s what the 300 could become? as you still need a large premium sedan in the American market under the Caddy’s price point! I hope they don’t knock their large sedans down to just a Dodge sedan, in the coming years? that will send people in my age range(45-70+) to a Caddy’ or a Import large sedan, that most $45k 300 C purchasers can well afford. our range -$45k to $60k. Yes we sedan buyers are still out here! I have nothing against suv’s except to me the all seem to have the same shape? large, to small, with just different front faces and back end looks. and Interiors.

With Ford and Gm mostly abandoning this large sedan market. It’s win, win, for the 300, and Charger, if they Stellantis take advantage of it! I hope they take these 2- Charger/300 into hybrid, and full electrification, as well as continue gas powered version’s however they time that out? and if they do decide to kill these 2 nameplates? then give us Mopar lovers a couple of new large sedan’s with the future propulsion tech!

As of now the 300 has severely been neglected in every way after 2018 the last time I even seen an Add of any type, anywhere, for it was 2018. hell even dealers have em in the corners of the show rooms, or lots, I see this a lot! We own a 2017 300 C (full options loaded) I have sat in Caddy’s of the same years 2015-2021 and Lincoln’s and point for point they all are about a tie, in ergonomics Interior, (but Ill give the interior Nod to the top Optioned Lincoln Continental) I would give the 300 the nod in looks over the fighter jet styled-Caddy’s, and the Lincoln sedans- am I a Jag, or Volvo, looks. the 300 in my opinion has got to be tweeked for 2022, as this and 2023, may be it’s final curtain call?

It does not take much cash to change a grille, and lights, etc. and update an interior! they did it for the current Durango! hell why no go out with a bang and help elevate the Chrysler Brand at the same into the future! and please bring the C trim level back to America! as they still offer it in Mexico/South America-(SMH?) on that decision by the then FCA leaders.