It’s got eight speeds. It was engineered by ZF, originally, and was modified by the friendly Mopar powertrain engineers. It’s able to handle a lot of torque, and can have an integrated electric motor.

It’s the brand new, fourth-generation ZF 8-speed, dubbed 880RE. The first eight stands for eight forward gears; the second is a rough torque rating, suggesting it can handle around 600 pound-feet of torque (the Hellcat cars have a torque rating of 9). The R and E mean it is meant for rear wheel drive vehicles (including those with AWD or 4×4 systems), and has fully electronic controls. 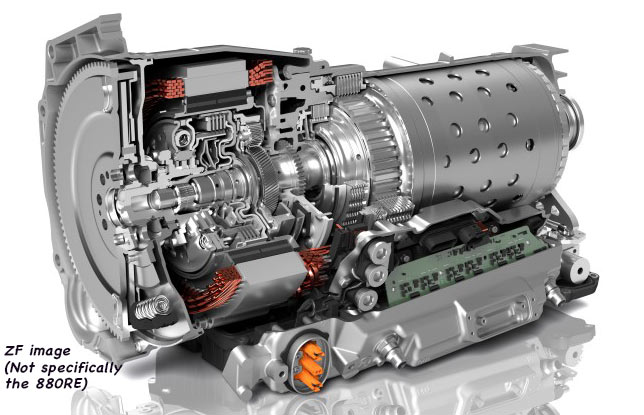 The new transmission will, according to our sources, be made under license by Chrysler itself for a variety fo vehicles, as some versions of the current eight-speeds are. Whether owners notice that they have the new transmission or not is a matter for speculation; shifts could already take place in well under one second in the first Charger and 300 eight-speeds. But there is another aspect of this story.

According to ZF, these fourth generation transmissions can handle more power and have higher efficiency than prior generations. They can be used with up to 160 kW of electric power at 350 volts in plug-in hybrids (PHEVs), or with up to 34 kW of power at 52 volts in mild-hybrids. Improvements include greater mechanical efficiency; integrated power electronics; and an integrated start-off clutch or torque converter. The strongest of the fourth-generation transmissions can handle up to 1,000 Nm, or around 737 pound-feet, according to ZF, which has no specifics on this particular model.

The higher efficiency is likely to show up largely as (slightly) higher fuel economy, which is still handy since the former FCA US continues to buy expensive fuel-economy credits from Tesla; but the main advantage is likely the more-serious hybrid capabilities, which can cut the cost of a new car while increasing its power and pushing its gas mileage up.