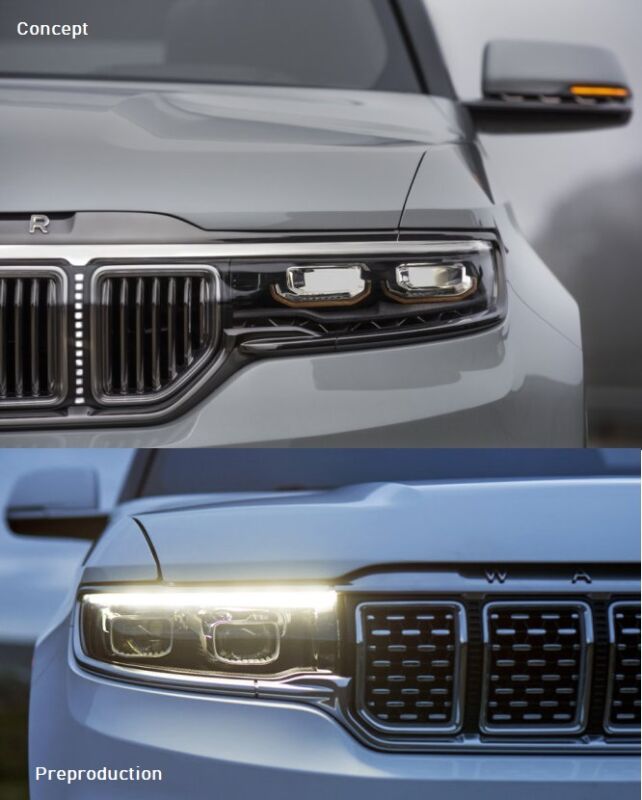 The luxurious Ram-based Jeep Wagoneer and Grand Wagoneer are due for the ’22 model year; the first out of the gate in EPA gas mileage ratings is the Grand Wagoneer, suggesting that will be the first available for buyers. The pricier of the two vehicles, the Grand Wagoneer seems to come with a standard 6.4 liter (392 Hemi) engine coupled to an eight-speed automatic.

The big Hemi, not surprisingly, guzzles premium fuel, with just 13 mpg city; the rear drive version is ever so slightly more economical on the highway, getting 19 mpg, versus the 4×4’s 18 mpg. It hardly seems worth it. The EPA rates both at 15 combined, or 6.7 gallons per hundred miles (gallons/mile is a linear relationship, while oddly enough mpg is nonlinear, so as mpg goes up, differences are less important).

The Chevrolet Suburban starts with 21/27 ratings, but that’s with a relatively sluggish diesel. Move to the more comparable 6.2 liter Chevy, and it drops to 15 city, 20 highway, also on premium. Chevy’s 6.2 liter V8 only produces 420 horses, though. We don’t have Grand Wagoneer acceleration figures, but Chevy’s 6.2 Suburban does 0-60 in just 6.4 seconds; we’re hoping for under 6 from the Jeep, which is enough to beat just about any 1960s muscle car.

In Dodge cars, the 392 produces a hefty 485 horsepower, with “instant-on” torque—just what you’d want in a big, heavy luxury SUV.

Jeep dealers have been ordered in no uncertain terms to handle Wagoneer buyers with kid gloves. Training has been extensive and thorough, though certification has come perhaps too far ahead of actual trucks on the lot.