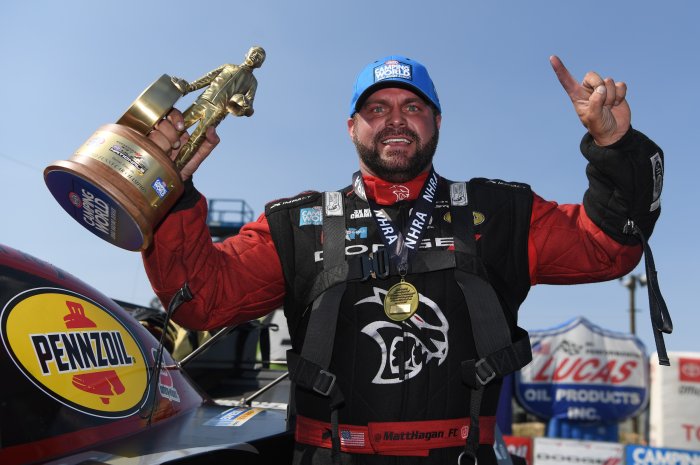 This past weekend, the NHRA Camping World Drag Racing Series headed to Colorado for the Dodge//SRT Mile-High NHRA Nationals Presented By Pennzoil. This year hasn’t been as great as past years for the Don Schumacher Racing team, coming into the race at Bandimere without a win in Funny Car or Factory Stock Showdown. The team’s only win this year came at the Lucas Oil Southern Nationals, where Antron Brown drove his dragster to the top of the ladder in Top Fuel.

However, the Mile-High NHRA Nationals went almost exactly how Team Mopar fans had hoped, with Matt Hagan getting his first win of the season in the Funny Car class while Lead Pruett lost by a nose in the Factory Stock finals.

Matt Hagan and his Dodge Charger SRT Hellcat funny car came off of the trailer fast, running a 3.966 at 319.22 miles per hour in the first round of qualifying. That first round qualifying run was good enough to carry through the second and third rounds, allowing Hagan to start eliminations in the top spot. Qualifying went well for Hagan’s teammate, Ron Capps, as well, with Capps heading into eliminations in the fourth spot while Cruz Pedregon and his Charger started in the ninth slot. 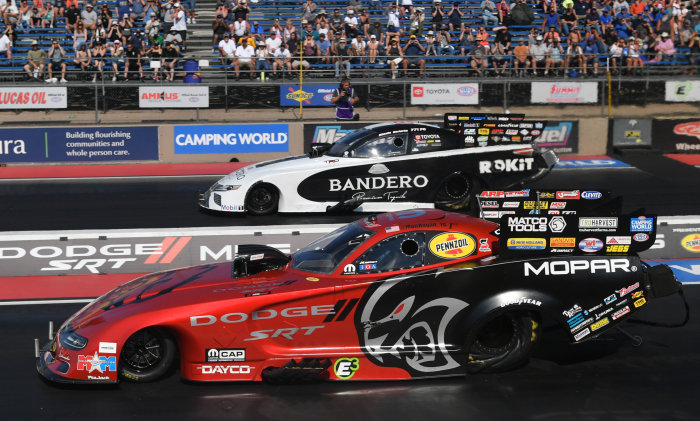 There were only 13 cars entered in Funny Car, so Hagan had a free pass in the first round and he ran a very respectable 4.045 at 317 miles per hour while teammate Ron Capps beat Terry Haddock to advance to the second round. In that next round, Hagan knocked off Bob Tasca III and Capps beat John Force, setting a Dodge-on-Dodge battle in the semifinals. The two DSR drivers pulled nearly identical reaction times (.071 for Hagan, .076 for Capps), leading to a thrilling race from end-to-end. With a 4.022, Hagan beat Capps’ 4.051 to advance to the finals. 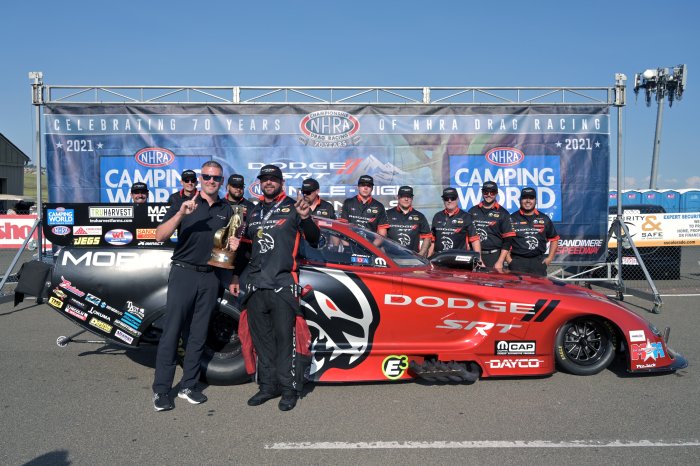 Meanwhile, after beating Jack Wyatt in the first round, Alexis DeJoria and her Toyota Camry had a free pass in the second round due to the short field, leading to a semifinal battle with Tim Wilkerson and his Ford Mustang. Wilkerson slept at the tree and ran into issues mid-track, allowing DeJoria to advance to the finals. 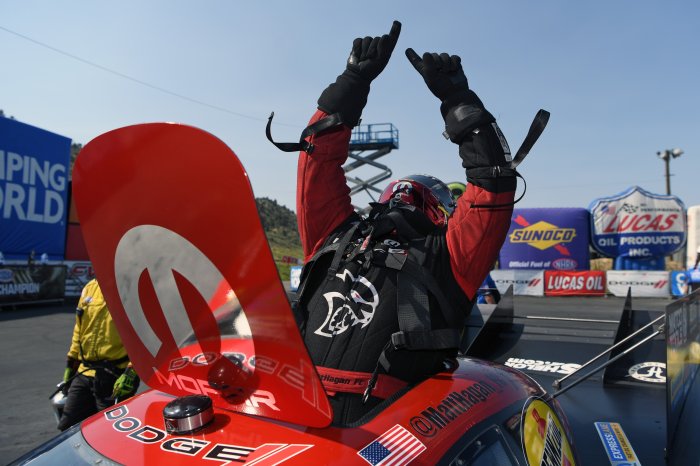 In the finals, Matt Hagan grabbed a starting line advantage over DeJoria’s Toyota and he never looked back, running a 4.105 to her 4.227 and winning his first event of the 2021 season. You can watch that final round race below.

With the win, Hagan now sits third in the championship race, 85 points behind leader Bob Tasca III while Ron Caps sits fifth, 114 points out of first.

In the production-based Factory Stock Showdown class, there are two key competitors in the Dodge Challenger Drag Pak and if you are reading this, the odds are good that you know that those competitors are Mark Pawuk and Leah Pruett. 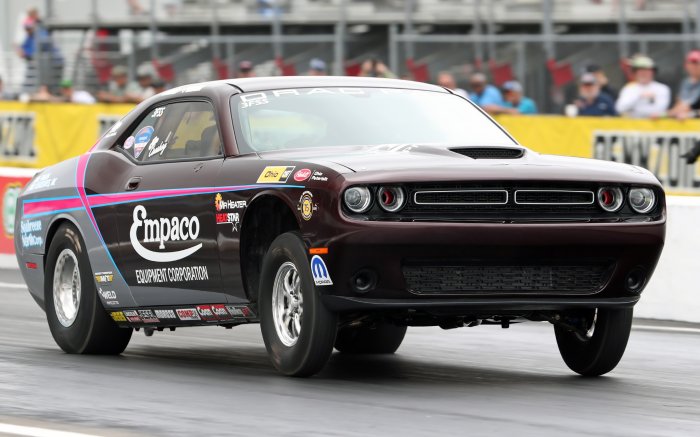 With the help of new crew chief A.J. Berge, Pawuk was strong right off of the trailer, grabbing the third spot during the first round of testing with an 8.38 at 164.75 miles per hour with his Empaco-sponsored Dodge Challenger (shown above). As qualifying continued, he improved his time to an 8.33, but he dropped to the eighth spot. On the other hand, Leah Pruett was towards the bottom of the qualifying order early on, but at the end of the fourth round, she had jumped up to the fourth spot with an 8.26 at 167 miles per hour with her Mopar-sponsored Dodge Challenger (below). The third Challenger in the field – and the only other non-Camaro – was driven by Joseph Welch, who started in the ninth position with a 8.404 qualifying effort. 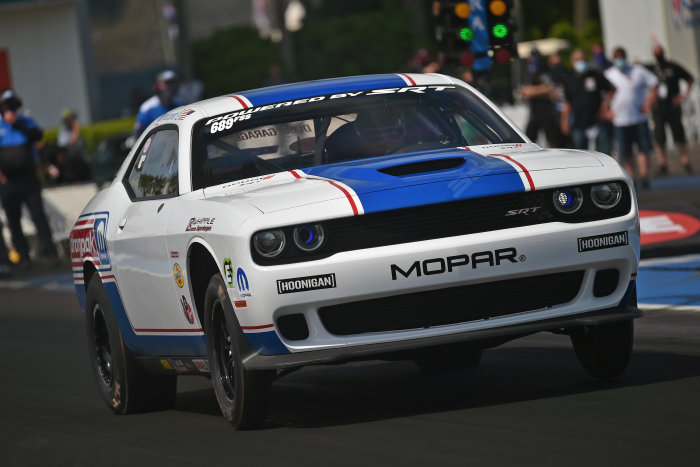 In the first round, Pawuk won with an 8.345 (beating Welch) while Pruett won with an 8.344. In the second round, Pruett won again, this time running an 8.29, but in a tight race, Pawuk lost to Aaron Stanfield. Stanfield won with an 8.284 to Pawuk’s 8.286. Fortunately, Pruett got revenge for Team Mopar in the third round when she ran an 8.259 to beat Stanfield.

In the finals, Leah Pruett and her Dodge Challenger Drag Pak squared off with Stephen Bell and his Chevrolet Camaro COPO (image above). Bell qualified third and ran an 8.279 in the semifinals while Pruett qualified fourth and ran an 8.259 in the semis, setting up what was expected to be a great drag race – and that is exactly what it was. 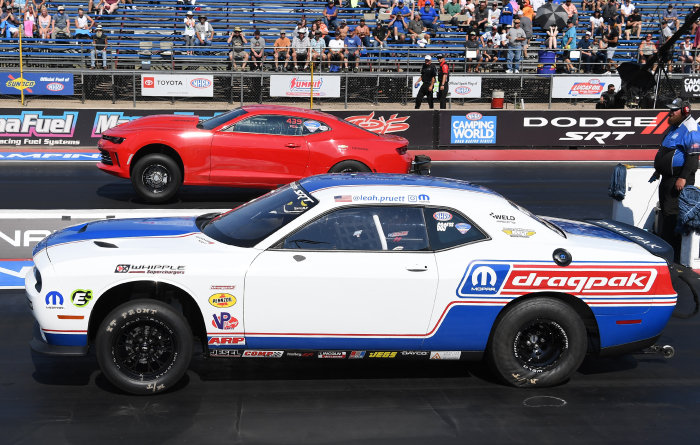 At the starting line, Bell had an early edge over Pruett with a slightly better reaction time (.051 to .053), and the two stayed practically side-by-side for the duration of the race. The two were still wheel-to-wheel when they crossed the finish line, with the Camaro inching out the Challenger for the win. Bell ran an 8.259 at 164.79 miles per hour while Pruett ran an 8.265 at 166.48 miles per hour.

We generally don’t cover Top Fuel since the vehicles aren’t branded, but as mentioned above, Antron Brown had the only win in 2021 for Don Schumacher Racing coming into the past weekend’s race while Leah Pruett is routinely among the quickest in the class. Unfortunately, Brown lost in the first round and Pruett lost in the second, but with Pruett having a great weekend in Factory Stock Showdown and Hagan winning Funny Car, it was still a great weekend for Don Schumacher Racing.