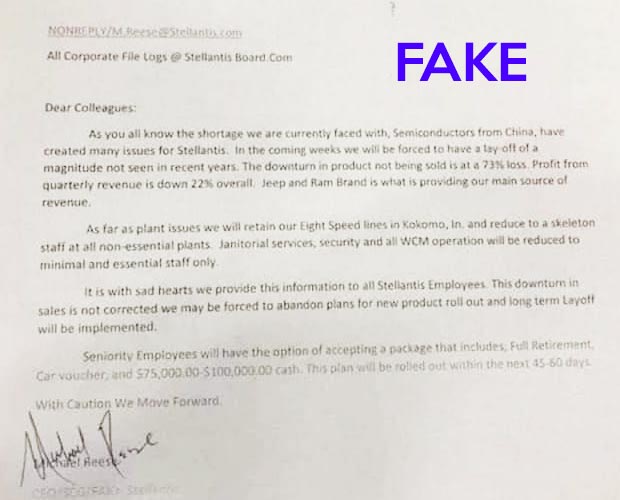 How fake is this letter posted to Facebook, “from a Stellantis employee,” which came with a possibly-real Stellantis letterhead? Pretty fake. Let’s look at the issues.

First, while there is a semiconductor shortage, it’s not only China that’s the problem; the sudden Texas shutdown meant hundreds of thousands (if not millions) of semiconductors in-process were lost. Given the time it takes to turn those into chips, that loss is hitting Stellantis now. The sudden power-out and freeze literally destroyed a great deal of fabrication equipment which won’t be replaced until June or July, so don’t expect this problem to be over quickly. A typical Stellantis executive would hardly blame China in print, given that Texas is likely as much a problem as China; and in any case, the company doesn’t usually happily publicize where it imports parts from.  Nor, for that matter, do typical executives capitalize Semiconductors.

We won’t even get into the haphazard way this sentence, and most of the others, are made, but we can talk about the nonsensical sentence “The downturn in product not being sold is at a 73% loss.” Typical executives have MBAs and can write about losses in sensible ways.

No Stellantis executive would be caught dead writing a memo to all employees which includes the phrase, “Jeep and Ram Brand is what is providing our main source of revenue.” First, it’s obvious; second, it’s just Not Done; and third, the wording is awful.

Likewise, why would a temporary chip shortage affect any transmission lines? Why would an executive single out Kokomo and ignore the other Indiana transmission plants? They would be unlikely to refer to Kokomo by that name. Nor would they refer to a skeleton “WCM operation” staff.

Never in a million years would a random executive send out a blanket announcement to everyone with retirement incentives 45-60 days before it is announced. For that matter, they generally know the term is “senior employees” (and define it) rather than “Seniority Employees.”

Sadly, people have been fooled by this rather awful impersonation of a corporate memo. Don’t be one of them.

1 thought on “Inside a fake Stellantis memo from Facebook”