The Jeep brand has offered a handful of eye-catching exterior colors with unique names over the past few years, but with today’s announcement, the Wrangler gets the flashiest hue of the modern era. Named Tuscadero, this is described as a “deep and intense chromatic magenta” and in pictures, it looks a great deal like the old Furious Fuchsia Dodge option. Tuscadero might be a little dark than Furious Fuchsia, but if you have been hoping of a metallic hot pink Jeep Wrangler, you are in luck. 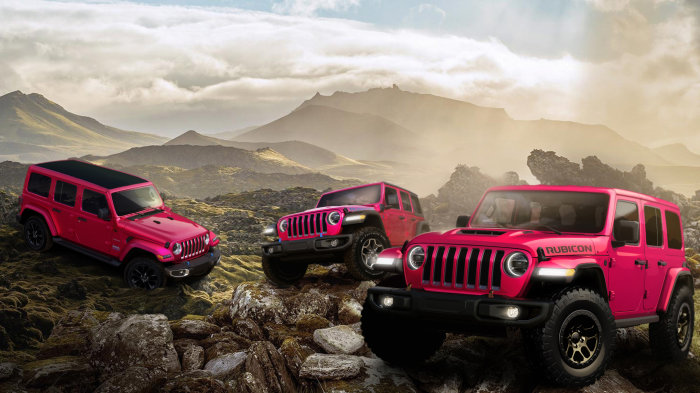 “With the Jeep brand celebrating its 80th anniversary, it’s the perfect time to launch a confident and custom color on the most iconic Jeep vehicle – both of which are designed to break the mold and stand out on the road and trails,” said Jim Morrison, Vice President, Jeep Brand North America. “What’s unique about colors like Tuscadero is that they draw a huge enthusiast following because they’re exciting, authentic and stand out, much like the Jeep community.”

This is the first time that Tuscadero has been offered on the Jeep Wrangler, and while the paint code may have been used under another name in the past, the Happy Days themed name has definitely not been used before. For those who aren’t sure, Tuscadero was the last name of Carol “Pinky” Tuscadero on the television show Happy Days. She was the love interest of Arthur Fonzarelli, better known as “The Fonz”, the main character of the show. As her nickname would suggest, she always wore pink, and while it was more of a light, pastel pink, the name reference will be appreciated by people who know the show.