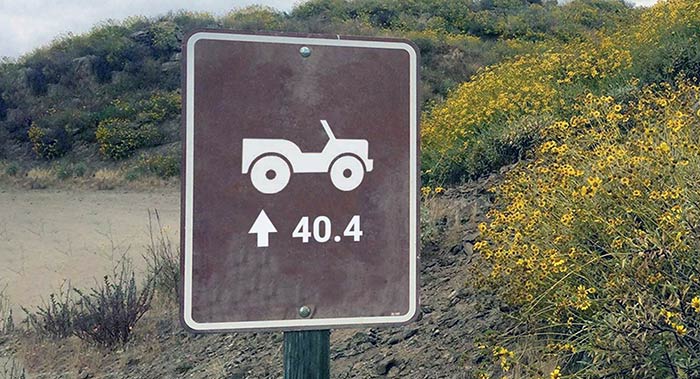 Jeep tweeted an image of a sign showing a Wrangler, with an arrow pointing up, and the cryptic message 40.4 in big numbers. The code at the bottom right might read “JL 106” but it’s too fuzzy to be sure.

Motor1 had a fine analysis by Christopher Smith going over the many possible explanations, while also generating a sense of fatigue with the teaser-mania which started at Fiat Chrysler and has been adopted by other automakers since—even Toyota with its Tundra which is being released one image at a time. Here are some of Christopher’s theories (some of which come from other parts of the Internet):

Not suggested are a 40.4:1 gear ratio, or 40.4 inch diameter tires, 40.4 mpg (which seems highly unlikely), or any number of other possibilities. For that matter, this could be a real sign pointing to something in a park that’s 40.4 miles away. Or 40.4 kilometers away, or 40.4 meters away. Maybe it says the trail ahead is suitable for 4x4s only?

The arrow does seem to be pointing at the back of the stylized Jeep, rather than one of the wheels, but might just be meant to signify “ahead.” We’ll presumably find out at some point, and feel a bit foolish if the fuzzy little bit of sign on the bottom right means anything.