This morning, Tony Stewart Racing (TSR) held a press conference at zMax Dragway in North Carolina, which was streamed live on the NASCAR legend’s Facebook page. As soon as the video feed went live, it was clear that many of our predictions proved to be accurate. Stewart was shown sitting at a table with his fiancee, Leah Pruett, and NHRA Funny Car champion Matt Hagan. The point of the press conference was, as we expected, to announced that Tony Stewart Racing will field an NHRA team in 2022 and as we speculated, Leah Pruett will be his driver in Top Fuel. What comes as a bit of a surprise is that Matt Hagan is also leaving Don Schumacher Racing to drive a funny car for Stewart’s new team. 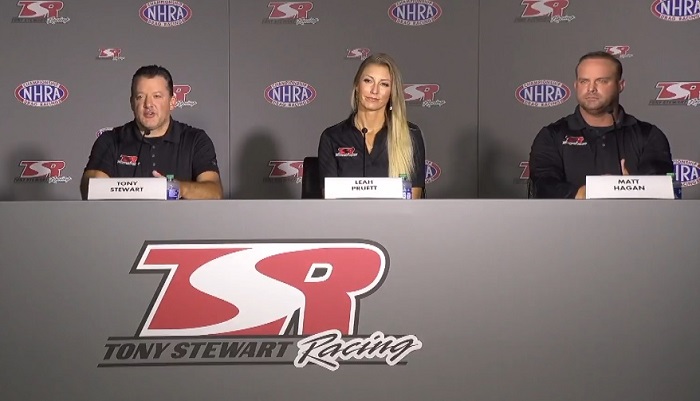 “When I retired from full-time driving, I said it wasn’t the end, but the beginning of a new chapter. This is proof of that,” Stewart said. “I appreciate all forms of racing, and I’ve always been intrigued about drag racing and NHRA, in particular. Back in 2009, when Tony Schumacher and I were both representing the U.S. Army, I got to hang out with him and Don Schumacher at the U.S. Nationals. Tony ended up winning, and after taking it all in, I was hooked. But it wasn’t until I met Leah and started going to races regularly, where I saw the strategy and the preparation firsthand, that I truly understood it.”

Today’s announcement did not address the brand affiliation for the new Tony Stewart Racing NHRA team, but based on comments by Stewart pertaining to how much Don Schumacher is helping acquire everything needed, it seems that TSR will be working with DSR. Furthermore, the Associated Press reported that “TSR will be a Schumacher customer”, so unless Don Schumacher Racing switches to a different brand, it seems likely that Stewart’s NHRA team will have a Dodge or Mopar brand affiliation.

Frankly, even without the comments about Schumacher helping Stewart and the AP statement about TSR being a Schumacher customer, it seems highly unlikely that both Leah Pruett and Matt Hagan would depart from their Mopar/Dodge sponsorship in 2022. We all know that Mopar is heavily involved in the NHRA and as part of their sponsorship program with Mopar, both Pruett and Hagan are regularly featured by the company.

However, some outlets have reported that the manufacturer’s affiliation for the new Tony Stewart Racing NHRA team will be announced at a later date, meaning that it could be something other than Mopar or Dodge. However, all of the comments made by Stewart in today’s press conference lead us to believe that Leah Pruett and Matt Hagan will still be racing for Team Mopar in 2022 – just with a new team owner.