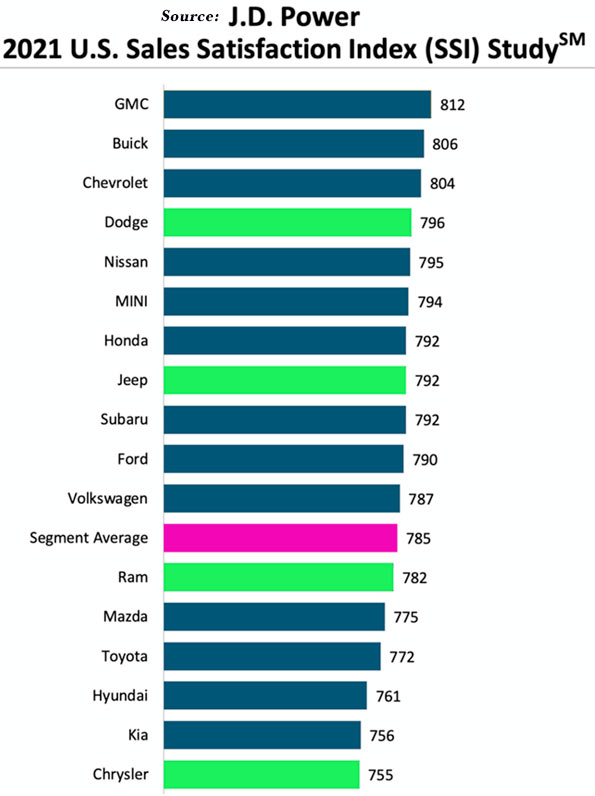 This year, while the Chrysler brand itself is still down in the dumps, the others have improved quite a bit—which Automotive News credited to initiatives from new CEO Carlos Tavares.

In a rather stunning development, Dodge leaped up to the top of the list, as the first non-General-Motors mass-market brand on the list. Dodge came in below GMC, Buick, and Chevrolet, but ahead of the rest of the mass-market brands.

Jeep matched Honda and Subaru, coming in ahead of Ford and the average. Ram came in just below average but above Toyota and Hyundai. Fiat presumably did not sell enough vehicles to make the list, and Tesla does not cooperate with J.D. Power (but would have edged out Cadillac among premium brands).

To jump up, Jeep had to gain 24 points, Dodge rose by 17, and Ram by 14. (Chevrolet was hard to leapfrog, going up 17 points from an already good position).

In the premium brand space, Porsche topped the list; Cadillac was #4, and Alfa Romeo was just above average. The worst brands were Genesis (well below the next worst) and Audi.

The satisfaction numbers are entirely based on purchasing or leasing, not service.