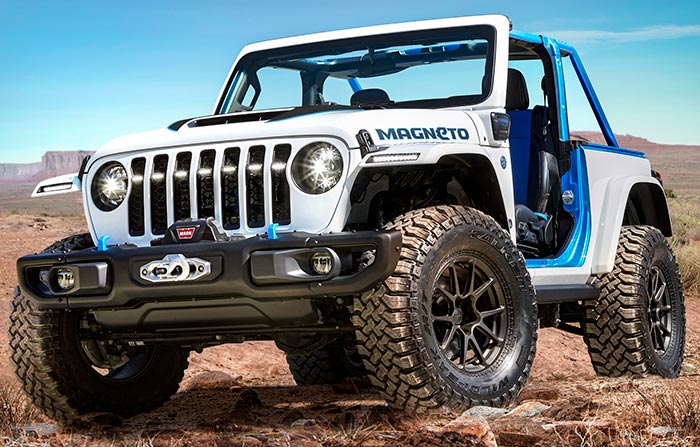 This year’s Easter Jeep Safari concepts are a pretty diverse bunch—though all based on the Wrangler/Gladiator body.

The Magneto concept is battery-powered, with an axial flux electric motor running up to 6,000 rpm, connected to a six-speed manual transmission. That’s right, a manual transmission electric—something for the rest of us. Its power is about the same as the Pentastar V6, with 273 pound-feet of torque and 285 horsepower; it was calibrated to act like the V6, too.

The concept runs from 0-60 mph in 6.8 seconds, faster than the real V6 if slower than the latest 2-liter 4xe. 70 kWh of batteries run at 800 volts, distributed around the vehicle to help with balance. The Wrangler still has a 30-inch water-traversing capacity and dual 12V batteries—one for the radio, lighting, and such, and another for accessories such as the winch, with a DC to DC converter to charge both. A high voltage heater is included, along with a JPP lift kit, black wheels, 35-inch mud-terrain tires, and other Mopar parts.

The rest-mod is an updated Jeepster Commando—the first compact four-wheel-drive vehicle with an automatic transmission; it had convenience features such as doors, roll-up side glass, heater, and roof standard, rather than options. This 1968 Jeepster Commando was merged into the 2020 Jeep Wrangler Rubicon, and set up as a beach-themed cruiser.

The body was modified and the exterior fuses original chrome trim with brightly colored two-tone paint (Hazy IPA and Zinc Oxide). Under the hood is the new 2.0-liter turbocharged four-cylinder engine with a custom calibration that increases output by around a quarter, hitting 340 horsepower and 369 lb.-ft. of torque. That’s rounded off by the usual eight-speed automatic and 4:1 transfer case, with 35-inch tires. The direct-injection engine uses a twin-scroll, low-inertia turbocharger mounted directly to the cylinder head, along with a dedicated cooling circuit for the turbocharger, intake air, and throttle body. 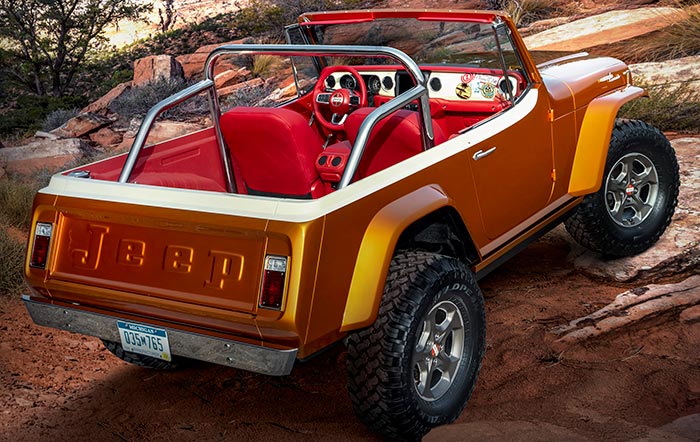 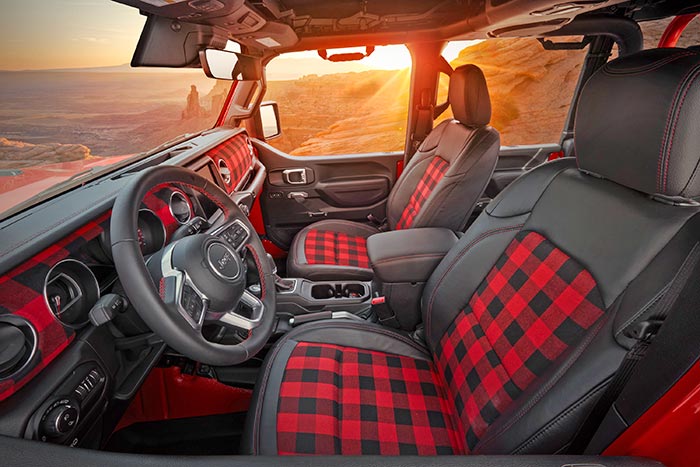 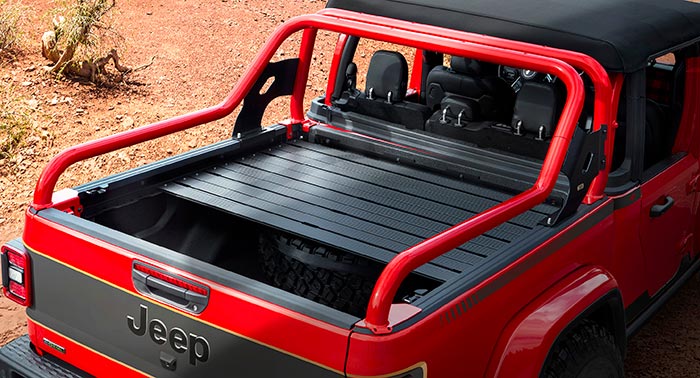 Orange Peelz has the side and rear windows replaced by prototype JPP half doors and a custom removable one-piece Freedom Top glass sunroof. A JPP two-inch lift kit is couped with 17-inch wheels and 37-inch tires. The hood is a concept piece with the Willys logo and JPP off-road lights. The factory-backed Mopar windshield was made with Corning Gorilla Glass for chip/crack avoidance. The JPP Swing Gate Hinge Reinforcement allows for a larger spare tire. The reinforcement is powder-coated black and works with the production hinge for easy installation. A JPP CHMSL (Center High-Mount Stop Lamp) Relocation Kit mounts the third brake light in the center of the spare tire. The concept has a stock V6 power system with a JPP cold-air intake and JPP cat-back exhaust system.