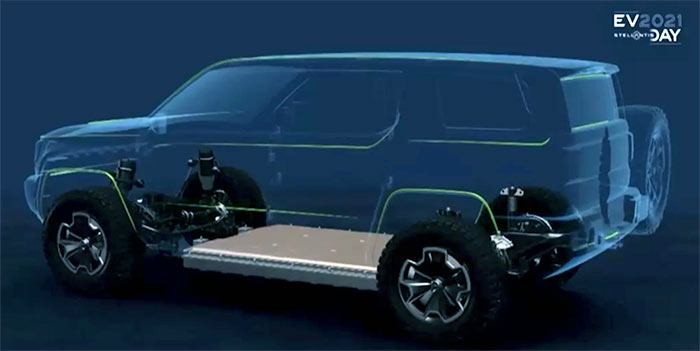 Head of design Ralph Gilles revealed in a recent video that Stellantis North America (SNA) is planning eight new electrified vehicles within the next five years. These will include:

The truck and SUV, at least, will likely be built off a “skateboard” body-on-frame platforms similar to those used by Rivian. The muscle car, already known to be a Dodge, claims to be the first BEV muscle car, though Tesla may have a few words to say on that topic.

The big SUV, which is clearly a Jeep (the Jeep grille is visible in the image), will be assigned to the “boxy and rugged” fork of Jeep products, as opposed to the “less capable, more car-like” fork. Based on the image, which shows the suspension, motors, and battery, it will be a pure-BEV developed specifically for the purpose; the question now is whether it will be based on STLA Large or STLA Frame. Stellantis is developing four flexible platforms engineered to be BEVs from the ground up, with three electric drive module families.

Stella wants to make big in roads in the EV market make the battery packs drop and run intead of waiting hours for a full charge.