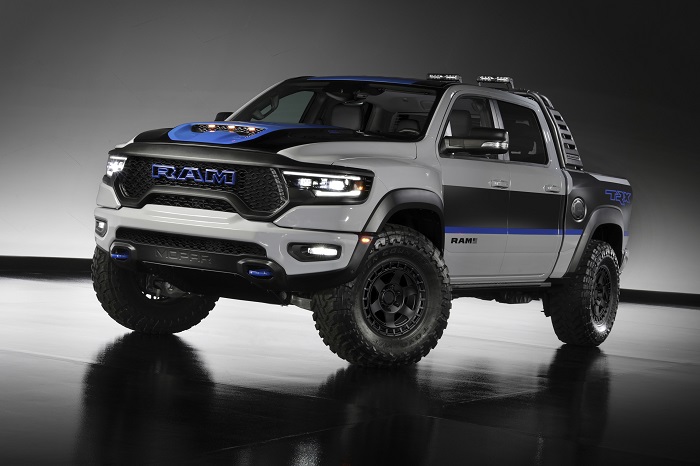 When Mopar teased their 2021 SEMA Show display vehicles, a shadowy image of the Ram 1500 TRX created the most buzz. As expected, the RexRunner Concept is based on the TRX, but a handful of Mopar upgrades along with some custom upgrades improve the functionality of the most powerful performance truck in the world. 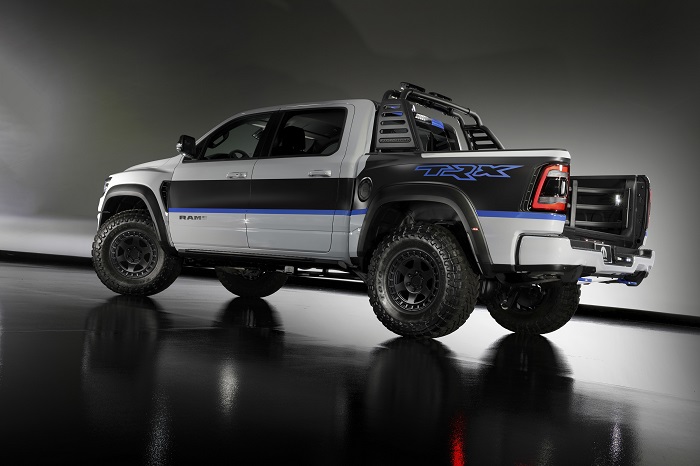 Next, the RexRunner Concept features the RamBar with 14-inch TYRI LED off-road lights which offer 4,300 lumens of illumination, a bed-mounted spare tire carrier with an extra 37-inch tire mounted on the custom wheel, spray-in bedliner and a Mopar bed extender rather than a tailgate.

There is also a Mopar bed step, a set of 5-inch exhaust tips and a sportier fuel filler door – similar to what is featured on the Challenger Hellcat.

The exterior of the Ram 1500 TRX RexRunner Concept is completed with unique Ash Gray paint with black trim and Mopar blue graphics. Some people speculated that the blue tow hooks in the teaser artwork pointed to a TRX eTorque model, since the eTorque models have blue trim, but like many other Mopar vehicles, it has the blue trim. Frankly, I think that the race-inspired livery with the black-and-blue trim on the light gray body looks fantastic. 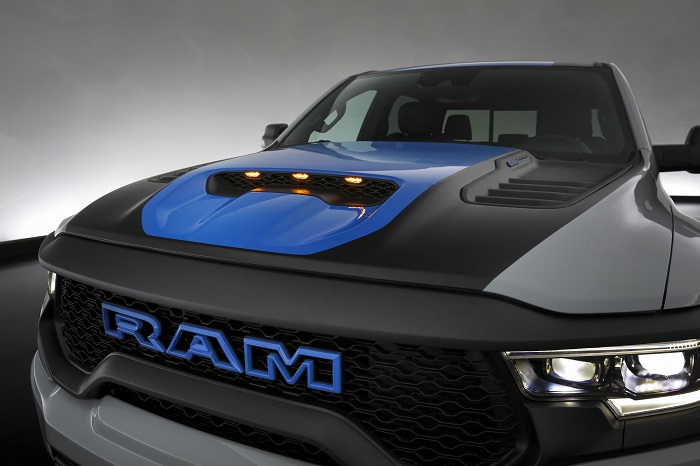 Finally, the most significant changes to the exterior of the Ram 1500 TRX RexRunner Concept can’t easily be seen in passing. This TRX has custom metal skid plates up front and out back, with the Mopar logo laser-etched into both panels. 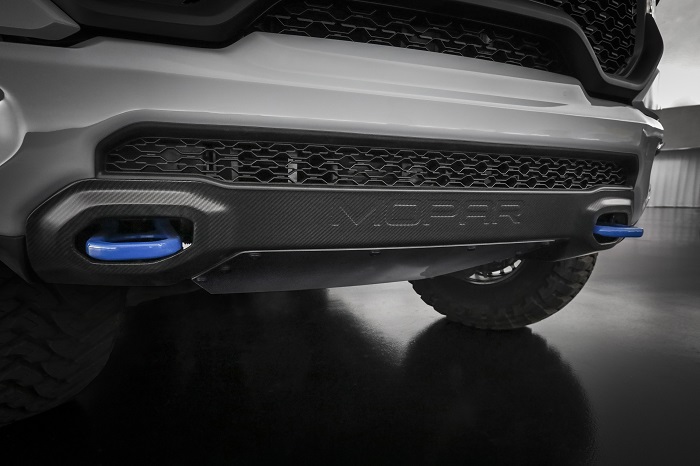 This unique front skid plate design increases the approach angle by 2.3 degrees, to 32.5 degrees while also protecting the front of the engine when climbing over large rocks. The rear skid plate protects the rear end from any direct hits and rock rails protect the body sides when this supercharged beast gets to pitching and rolling when off-road. The front and rear skid plates are custom right now, but we wouldn’t be surprise to see them show up in the Mopar catalog in the near future – especially considering the fact that they improve the off-road capabilities. 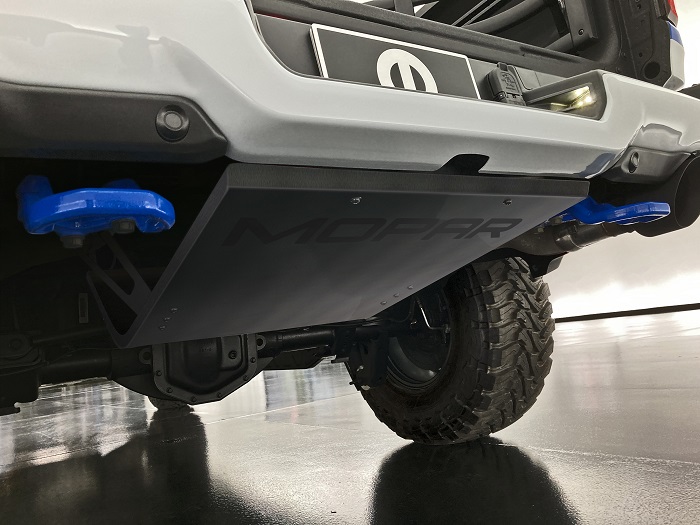 The production Ram 1500 TRX looks more like a luxury vehicle inside, but this SEMA Show concept has a more rugged, easy-to-clean design. This is achieved by using the one-piece molded inner door panels and the vinyl floor liner from the work-rated Tradesman model. The combination of the door panels and floor liner make it much easier to clean out the interior after a day of mudding. 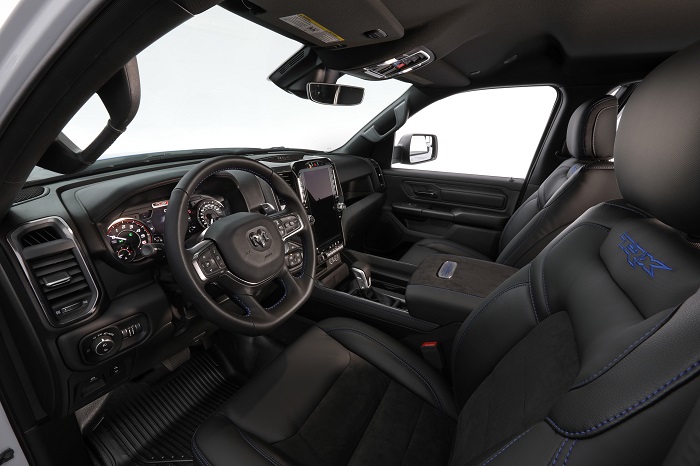 From there, the rest of the cabin is similar to the production Ram 1500 TRX, including the center stack with the gorgeous Uconnect screen, the configurable instrument cluster, a flat-bottom steering wheel with shift paddles, a shifter mounted in the center console (rather than the shift knob on the dash) and the sport seats with the TRX logo embroidered on the seat-back and deep base and side bolslters. This truck also sports a set of Mopar stainless steel pedal covers with black rubber pads for great grip with muddy shoes.

With the demand for the TRX and some buyers looking for less luxury inside, a lower-priced model with the basic Tradesman door panels and floor liner could be a popular option – especially among budget-minded buyers. 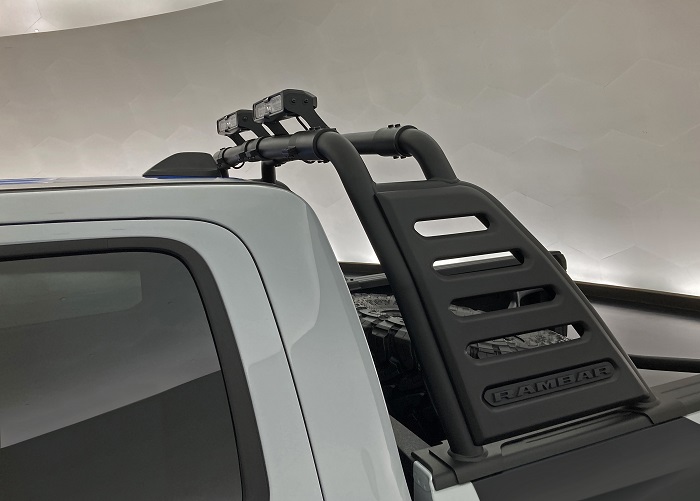 The Ram 1500 TRX RexRunner Concept will be on display in the Mopar area of the 2021 SEMA Show in Las Vegas, running from November 2nd through the 5th.