Last week, we brought you the news that Dodge had posted a quote by brand boss Tim Kuniskis asking the automotive community whether or not the company should resume the Roadkill Nights program. Roadkill Nights Powered by Dodge was held in the Metro Detroit area in 2015 through 2019, but it was canceled for 2020 due to the Covid-19 pandemic. With restrictions slowly lifting, Dodge is planning to host the incredible automotive event once again for 2021. It will once again by held at the M1 Concourse in Pontiac, Michigan, with legal street racing on the famous Woodward Avenue.

“Roadkill Nights — legal street racing powered by Dodge — is back this summer,” said Tim Kuniskis, Dodge Brand Chief Executive Officer – Stellantis. “Our Brotherhood of Muscle spoke — screamed, actually — that they were ready for it to return, so we’re doing it. Plus, this year we’re going to take it up a notch with a TV-versus-online build-and-race challenge. The ‘build rules’ are going to be really loose, so we should see some serious hardware being built to find out who’s faster: the TV or the Internet stars.”

If you have never attended a Roadkill Nights event, you might be wondering what exactly takes place. The obvious key attraction is the legal street racing on Woodward Avenue in Metro Detroit. This isn’t a play on words – they are actually racing on the street. There are concrete barriers in place to keep the spectators safe and the road is closed around the racing area, but this is actual, legal street racing. The racing takes place on a stretch of Woodward that runs along the front of the M1 Concourse road racing complex, so the event includes a long stretch of grandstands that gives spectator a great view of the street racing action.

However, while street racing is the main event, there is plenty more to see and do at a Roadkill Nights event. Since it is sponsored by Dodge, there are plenty of Dodge displays where you can get free stuff and some areas where you can buy Dodge merchandise. There is the Dodge Thrill Ride area, where a pro driver takes you on an exhilarating ride in a Hellcat Challenger or Charger, drifting around the confines of the road course and the concrete skid pad. Lining much of the unused road course is a massive show-and-shine area that is open to all makes and models, but it is understandably Dodge-heavy and like any good event, there are a ton of food trucks and concession stands where attendees can buy food and drinks. Finally, there is usually a kids’ area with bounce houses, so this is an event that is fun for the whole family. 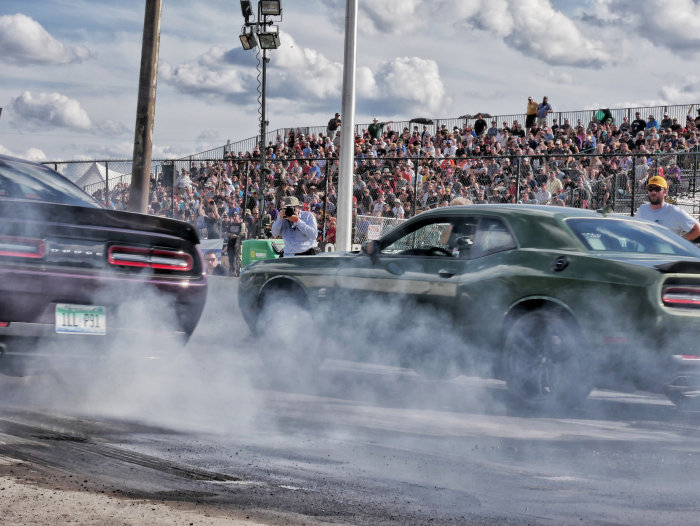 In past years, entry was very like – like $5 or $10 – and we expect that it will continue to be very inexpensive. At first, the racing program was free as well, but to weed out the vehicles that don’t need to be racing, there is a normal entry fee as well as an application process, where the event officials pick the best cars to be included in the track action. That being said, the racing field was not full in past years, so if you have a car that you like to take to the drag strip, don’t hesitate to apply just because you don’t know that you are fast enough. While 6-, 7- and 8-second cars will likely dominate the money rounds, it is still an awesome experience to go legal street racing in front of the huge crowd.

Once official pricing and racer registration information has been announced, you will find that here on Stellpower. In the meantime, begin freeing up your work schedule for a trip to Metro Detroit on August 14th for one of the coolest events that you will attend this year. The video below provides a quick glimpse of what Roadkill Nights by Dodge is all about.

Roadkill Nights Powered by Dodge 2021 will be held on August 14th, with gates opening at 10am. The drag racing program on Woodward Ave will officially begin at 11am and they will race until the program is complete. The official end time is 9pm, but in past years, weather and accidents have forced the program to run a bit later.