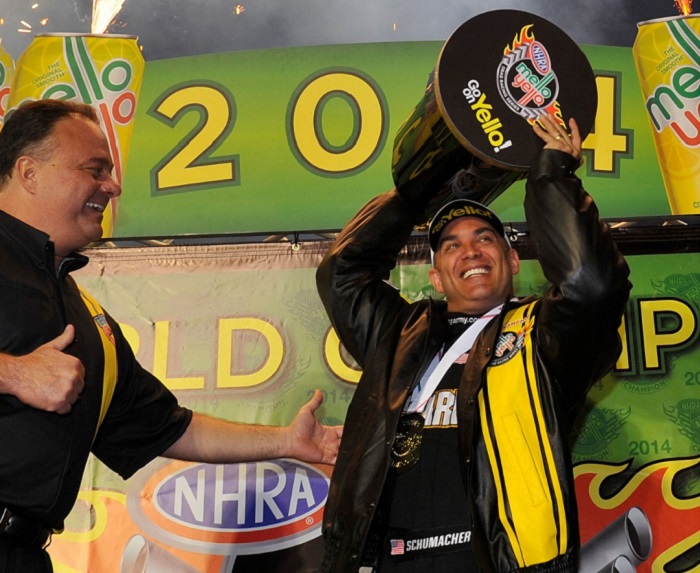 Earlier today, we brought you the news that NASCAR legend Tony Stewart will make an announcement alongside the President of the NHRA tomorrow. We expect that Stewart will be announcing his entry into the world of big league drag racing as an owner, as the media advisory from Tony Stewart Racing ended with a list of all of his successes as a team owner in the various forms of motorsports.

When we discussed Stewart’s possible entry into the NHRA as an owner this morning, we pointed out that it seemed likely that the new team would feature Stewart’s fiancee and Top Fuel championship contender, Leah Pruett, as the driver. However, some news from Don Schumacher Racing this afternoon adds in a new angle to this story.

UPDATE: It was announced on the morning of October 14th that Leah Pruett and Matt Hagan will be leaving Don Schumacher Racing to drive for Tony Stewart Racing in 2022. Click here for the whole story.

The Return of Tony Schumacher

Don Schumacher Racing announced this afternoon that 8-time NHRA Top Fuel champion Tony Schumacher will return to the driver’s seat for the full 22-race Camping World Series schedule in 2022 as part of the DSR team. The announcement explained that Joe and Cathi Maynard will serve as the primary backers for 2022, along with additional partners who will be announced at a later date. Click here for a closer look at the full statement from DSR.

The news of Tony Schumacher returning to DSR could mean two things.

First, there is a possibility that Tony Stewart is the partner of Joe and Cathi Maynard, in which case Tony Schumacher would be the driver of Stewart and Maynard’s new NHRA team. Obviously, if that is the case, Leah Pruett would likely stay with Don Schumacher Racing and her soon-to-be-husband would owner another car in the team stable. This would also mean that Stewart’s race car would likely pack similar Mopar power to Pruett’s Top Fuel dragster and that Schumacher would essentially replace Brown in the team lineup.

Really, this seems like the best case scenario for everyone involved, as it would allow Tony Stewart to get involved in the NHRA with a successful driver and team program, but without dismantling any portion of the current Don Schumacher Racing team. Also, having Tony Schumacher drive alongside Pruett would allow DSR to fill the gap created by Antron Brown leaving (which is happening).

The other possibility is that Tony Schumacher is rejoining DSR to effectively take Leah Pruett’s spot in the team lineup. In theory, if Leah Pruett leaves DSR to drive for Tony Stewart’s new team and Antron Brown leaves to start his own team, Don Schumacher Racing would need to find a new Top Fuel driver and possibly a new sponsor – should Mopar go with Pruett to Stewart’s new team. The financial input from Joe and Cathi Maynard could help make up for the loss of Mopar sponsorship money.

If this second scenario proves to be accurate, we will unfortunately see some fracturing of the current Team Mopar drag racing program. Keep in mind that Stewart runs Ford vehicles in NASCAR, so while Ford is sparsely competitive in the NHRA big leagues, there is a possibility that he could be backed by Ford. Hopefully, Stewart knows that Ford isn’t a factor in the world of Top Fuel while Mopar dominates, as the Mopar community would hate to lose Leah Pruett.

Of course, there is still the possibility that Tony Stewart’s announcement tomorrow has nothing to do with Tony Schumacher’s return to DSR, but right now, it seems like there is a good chance that Stewart’s driver will be a teammate to Pruett within DSR.

Hopefully Tony Stewart’s press conference tomorrow at 11am EST will answer all of the key questions. If nothing else, we will have a better idea of Stewart’s team will be part of DSR or competition to DSR.