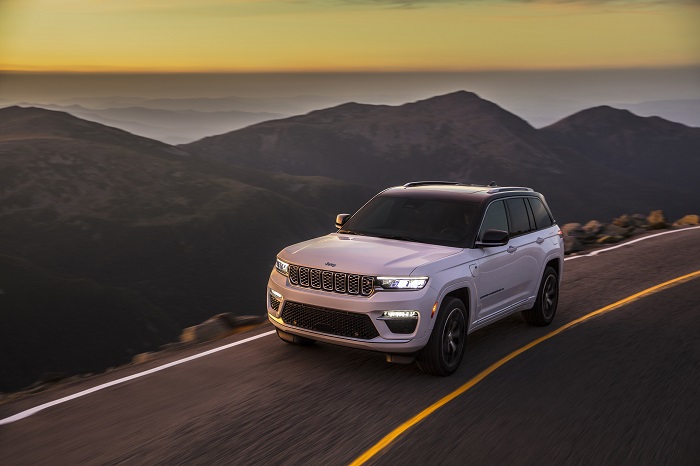 Some critics questioned Jeep’s move to make the Wrangler their first hybrid vehicle with all-electric driving capabilities, but the Wrangler 4xe quickly became the best-selling plug-in hybrid in the U.S. The Grand Cherokee is the second model to receive the optional 4xe hybrid drivetrain; after spending the day driving one around Texas, I have little doubt that it will only help to build Jeep’s hybrid sales figures. 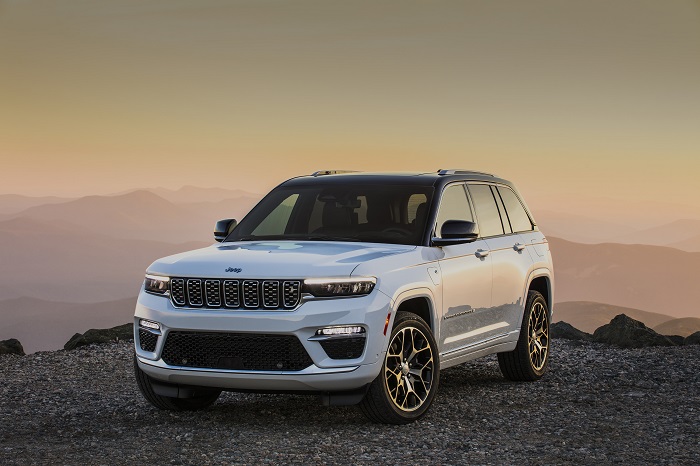 The 2022 Grand Cherokee 4xe is a big, heavy SUV powered by a turbocharged 2.0-liter gasoline engine and a pair of electric motors. The system offers a total output of 375 horsepower and 470 lb-ft of torque, making it the most powerful engine option in the Grand Cherokee lineup by a considerable margin – but it is also the most fuel efficient. It offers 57 MPGe without compromising power or towing abilities, but the key aspect of the Grand Cherokee 4xe is the all-electric driving capabilities. It has an official rating of 25 miles on a full charge, which isnt much compared to many pure hybrids, but for a large SUV with four-wheel-drive, it is a solid range. That is enough range for many commuters around the United States to get to and from work, and if their workplace has charging stations, they can expect to go more than 50 miles with a full recharge during the work day. 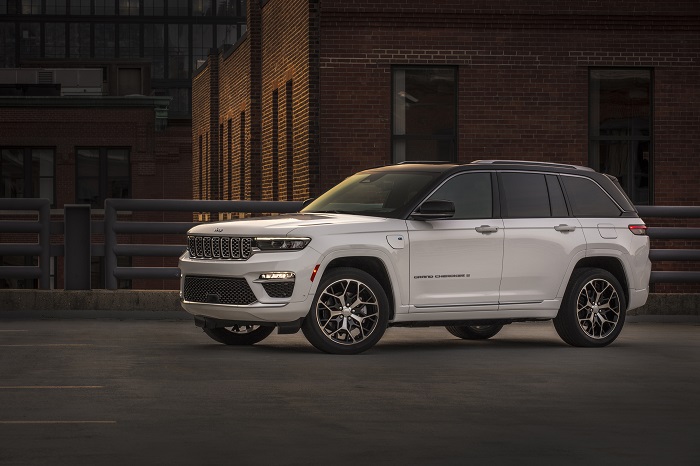 That being said, while driving around Austin, Texas, I made it almost 28 miles on battery power before the gasoline engine kicked in. That included a few moderately hard pulls from a stop, several climbs up big hills and a stop at a checkpoint along the highway, yet I still comfortably exceeded the official range. Had I not stopped at the checkpoint, I would have gone more than 28 miles on a charge. You cannot go to full throttle in Electric mode, as that will force the gasoline engine to engage, but on electric power, the Grand Cherokee 4xe has plenty of pep to keep up with traffic.

The mid-point of our drive route was a private farm where the Jeep team had set up an off-road course for the Jeep Grand Cherokee 4xe. While I drove a Summit Reserve model to the off-road area, we all drove Overland and Trailhawk models in the mud. I had an Overland with a fully charged battery, allowing me to go through the entire course on just electric power. 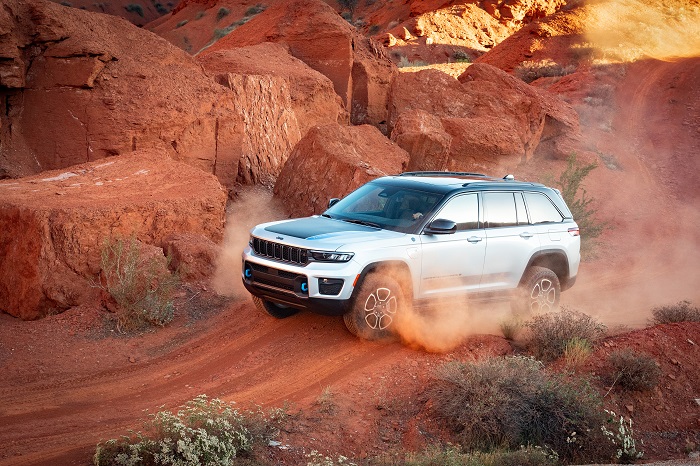 If you have never done any off-roading in an electric-propelled vehicle, it is a very interesting experience. Without the noise from the gasoline engine, you can hear everything going on around the vehicle – from the sounds of sticks breaking and mud squishing under the tires to random wildlife sounds. It is a very peaceful experience, but it comes without any compromise in off-roading abilities. Keep in mind, I was in an Overland – not the off-road-purposed Trailhawk – and it still comfortably climbed ever obstacle on the course without any gasoline and without any hesitation. 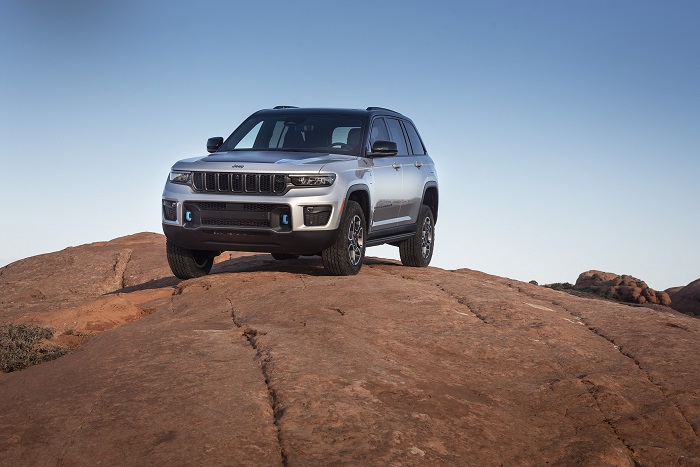 All-electric driving is only one aspect of the Grand Cherokee 4xe, but on- or off-road, the gas-free driving creates a uniquely enjoyable driving experience.

Once the battery system was depleted, the gasoline engine seamlessly engaged as the Grand Cherokee 4xe switched automatically from Electric to Hybrid drive mode. The engine is so quiet that you cannot tell when it is running at highway speeds without the help of the gauges. While driving in Hybrid mode, as the drive batteries build power from the regenerative system, the vehicle continues to cycle in and out of all-electric driving, with the gasoline engine providing further charging efforts when it is running. 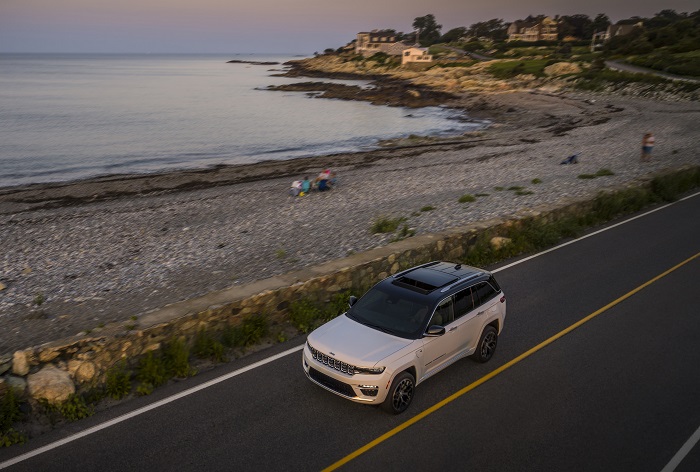 When driving in Hybrid mode with the turbocharged engine running, the 2022 Grand Cherokee 4xe offers a surprising amount of acceleration from a stop and when rolling on the highway. Jeep has stated that the hybrid is a full second quicker in accelerating from a stop to 60, using the instant torque of the electric motors to get off of the line quickly while the turbocharged engine provides more power through the mid-range. 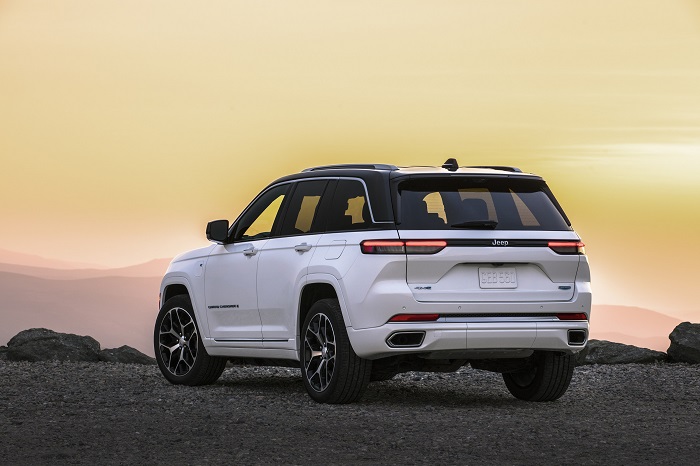 I also spent time with a car trailer hooked to the 2022 Grand Cherokee 4xe. Back in the 1970s, the U.S. Postal Service had a small fleet of electric Jeep delivery vehicles and one of them has been restored, belonging to a dealership in Ohio. We pulled the original electric Jeep with the new electric-assisted hybrid Grand Cherokee, and the 4xe handled the trailer beautifully. When pulling the trailer, I was in Hybrid mode, with both the gasoline engine and electric motors working, but the big Jeep pulled the trailer down a series of rough dirt roads with ease. The load was relatively light, tipping the scales at roughly 5,500 pounds, but the big hybrid Jeep pulled that really nicely. While most car-and-trailer combinations are heavier than this small, electric Jeep, many of the most common trailers in the United States weigh less than 6,000 pounds, making this a great test load for the 4xe. If you are pulling a two-horse trailer, a small boat or a utility trailer, the Grand Cherokee hybrid is a great option. 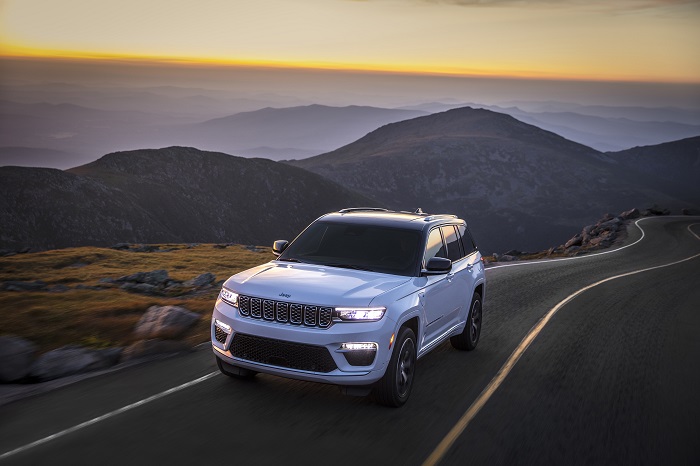 If you are considering a new Jeep Grand Cherokee two-row model and you are not focused on having Hemi power, the 4xe is likely the drivetrain that you will want. It offers all-electric driving, the most power in the model range and the best fuel economy in the model range without any compromise. These models cost more, but they apply to the $7,500 federal tax credit for driving an electric vehicle and they will save you money at the pump, but they also come with premium content that is not standard in non-hybrid models. 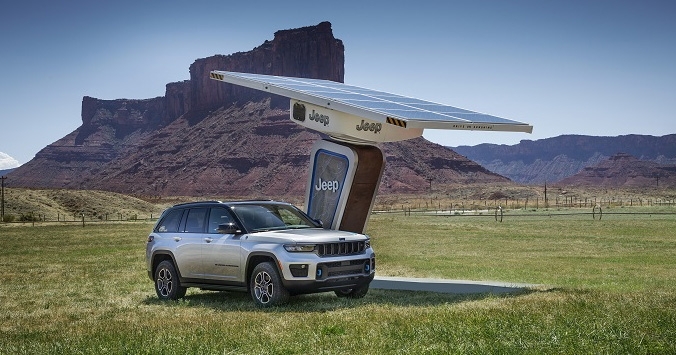 Once these models begin hitting dealerships in high volumes, I have no doubt that the Jeep Grand Cherokee 4xe will become the bestselling plug-in hybrid in the United States and the Trail Rated brand will continue its growth as the American PHEV leader. 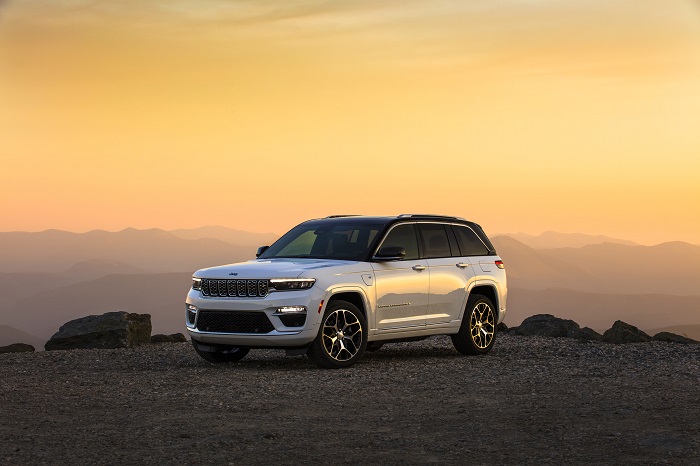