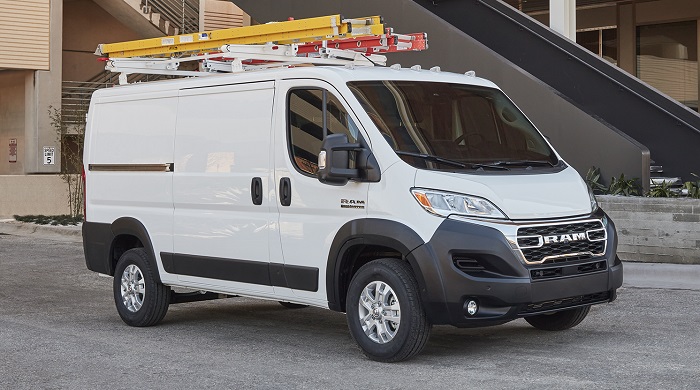 The 2023 Ram ProMaster, formally introduced today at the Work Truck Trade Show in Indianapolis, adds to the many 2022 model-year upgrades with a new front end design, superior headlights, and other features. While the headlights and grille are the most obvious changes, this hauling machine is more than just a prettier face. The new super high roof configuration brings best-in-class cargo volume and best-in-class interior cargo height, and the new headlights are far brighter than the oddly shaped ones in past models, and an optional rollup rear door maximizes loading space in crowded areas.

The higher roof and rollup door were already available on the Fiat version sold in Europe; the Ram is different in many ways, some to conform to local regulations, and some to deal with heavier loads and rougher roads. 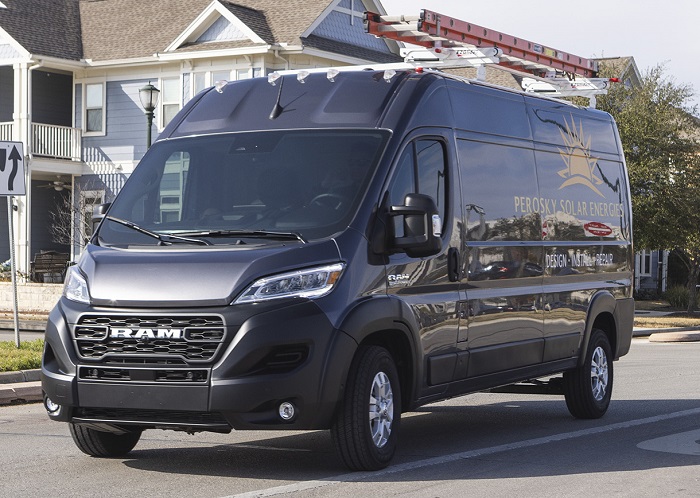 Ram CEO Mike Koval, Jr., wrote, “Ram ProMaster continues to evolve as we listen and respond to commercial customer input, and the 2023 model is a culmination of that effort.”

The 2023 ProMaster isn’t completely new on the outside, but there are enough changes to set it apart from the 2022s. The redesigned front fascia includes both the fog lights and the new, more modern headlights. The standard halogen headlights have 29% higher output than before, while the optional LED headlights are 70% brighter than current headlights. The headlights are still mounted high to be  safe from typical low-speed collisions in city traffic; an integrated step makes it easier to clear the windshield or change the wiper blades. 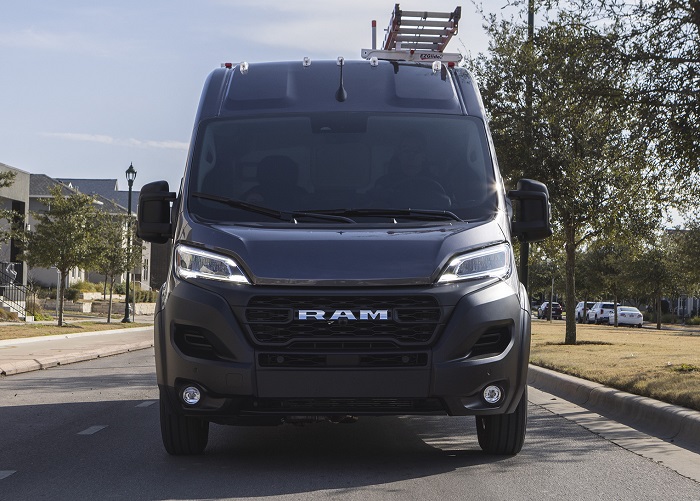 Next, 2023 ProMaster buyers can select from multiple wheel options including silver or black with a machined face. Two new paints, Ceramic Gray and Spitfire Orange, join the color palate, and there is a Black Appearance Package that comes with black grille, badges and wheels. These are not likely to be important to fleet buyers, but may be far more attractive to those who convert their vans into RVs.

Finally, the 2023 Ram ProMaster is available with a segment-exclusive roll-up rear door design, leading to easier cargo access in tight quarters. This rear door, already tested in Europe, makes it easier to access the rear cargo area in congested areas; it also avoids having careless deliverymen leave a door swung open in traffic. (The standard doors swing all the way around so they take up little horizontal space, but this requires a decent amount of room behind the van.) 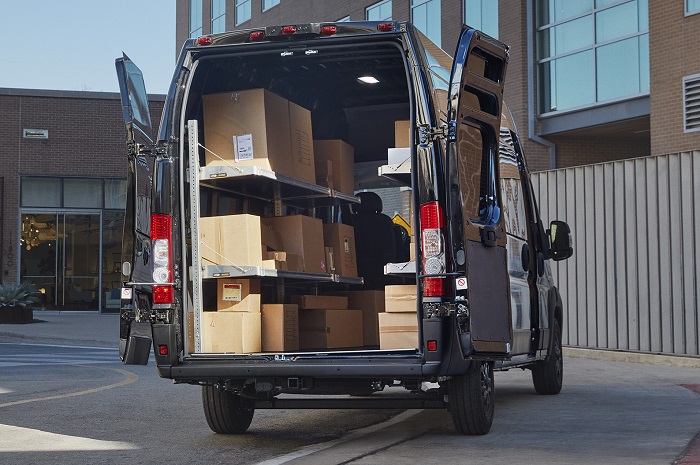 The 2023 Ram ProMaster is sold in three capacities, 1500, 2500, and 3500, with lengths of 8, 10, and 12 feet, with the low roof, high roof, or box design. There is also a 13.5-foot extended length with the new extra high roof that yields the best interior cargo volume and interior height. These options are almost all similar to the past ProMasters, other than the extra-high roof.

Many of the electronic upgrades were added with the 2022 models, including Active Driving Assist, adaptive cruise control, the 360° camera system, and option 10-inch telematics screen. 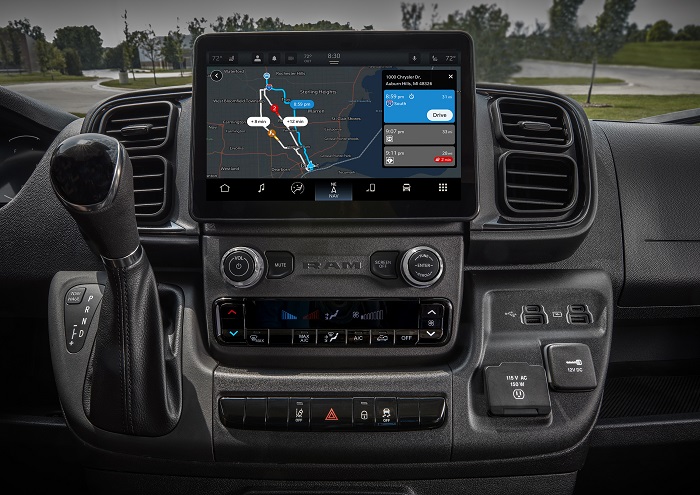 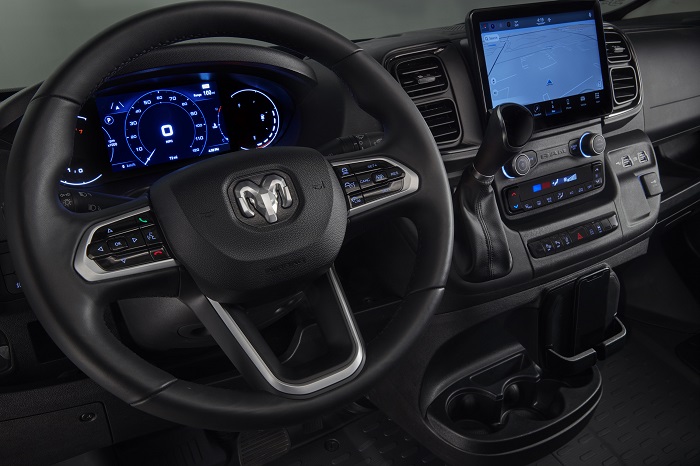 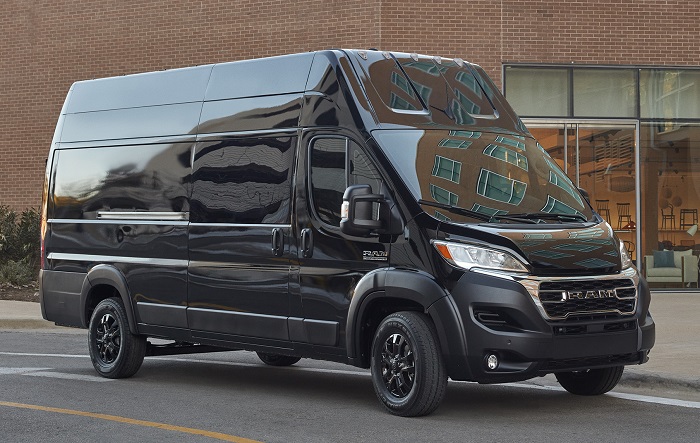 All 2023 Ram ProMasters come with the same 3.6-liter Pentastar V6, delivering 276 horsepower and 250 lb-ft of torque, and a nine-speed automatic transmission, replacing the old six-speed. Power is sent to the front wheels, unique among large commercial vans. The ProMaster can haul up to 4,680 pounds and tow up to 6,910 pounds.

The nine-speed, originally released in 2022 models, provided a real improvement in both fuel economy and acceleration; the first gear is a low 4.71:1 but the highest overdrive is 0.48:1.

The 2023 Ram ProMaster is expected to begin reaching dealerships during the third quarter of 2022, with pricing coming closer to the on-sale date. A battery-electric version will be released later in the model year, sharing with the Fiat already released in Europe.