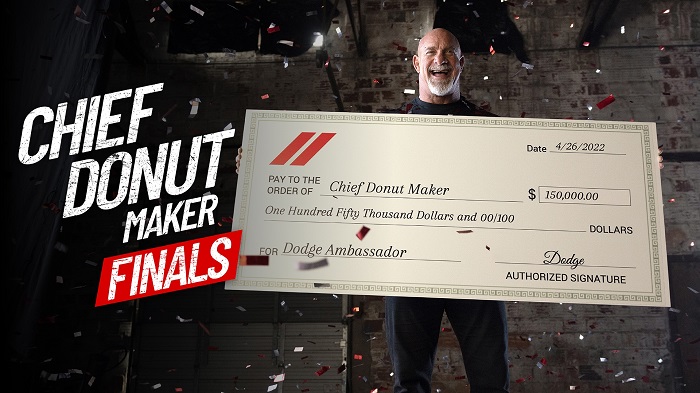 The process of picking the Dodge Chief Donut Maker has entered the final stages of the contest, with the first of three reality show-like webisodes airing on the 19th, the next airing on the 22nd and the final episode will debut on April 26th – otherwise known as Hemi Day(4-26).

“This exhaustive, one-of-a-kind process to find our chief donut maker, the person who will help lead the automotive industry’s most engaged automotive fan base into its electrified future, is now coming to its dramatic conclusion,” said Dodge CEO Tim Kuniskis. “While our top 10 candidates have shown they have what it takes to make the first cut, there can be only one chief donut maker. Now our finalists will be put in high-pressure scenarios, beyond burnouts and donuts, to prove that they possess the power to represent the world’s purest performance brand as the ultimate brand ambassador for the Brotherhood of Muscle.”

The person chosen to be the Dodge Chief Donut Maker will get a cash prize (being called a salary) of $150,000, the keys to a Dodge Challenger SRT Hellcat, an array of Dodge clothing and access to some of the most prominent automotive events of the year.

In the first of the finale videos, Bill Goldberg asks the finalists a selection of rapid-fire questions, allowing each prospective donut maker a chance to show off their automotive knowledge. You can watch that video below. The next video on the 22nd should showcase the finalists driving skills while the video on Hemi Day will introduce the world to Dodge’s Chief Donut Maker.