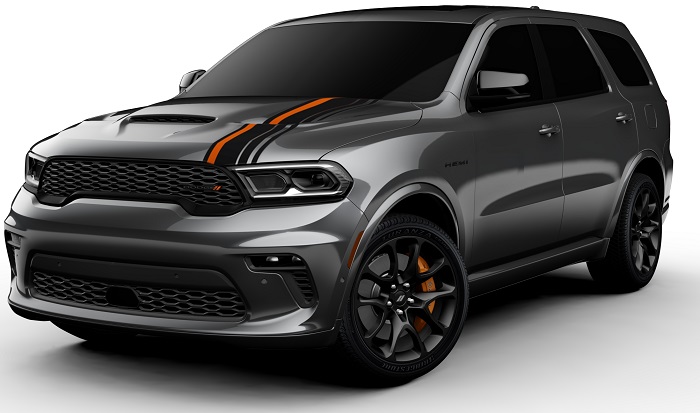 “HEMI Orange is a hot option for the Dodge Challenger and Charger, and now we’re expanding its reach by offering the Dodge Durango R/T HEMI Orange,” said Tim Kuniskis, Dodge brand chief executive officer – Stellantis. “The Durango has a muscle-car attitude, and the eye-catching HEMI Orange appearance embraces the Dodge performance DNA that is our foundation.”

As the name suggests, this new appearance package for the 2023 Dodge Durango is only available with the R/T trim level, meaning that it comes standard with the 5.7-liter Hemi V8. That engine sends 360 horsepower and 390 lb-ft of torque towards the wheels by means of an 8-speed automatic transmission, with the buyer’s choice of rear- or all-wheel-drive.

The unique features of the 2023 Dodge Durango Hemi Orange R/T begin on the outside, with gunmetal-and-orange stripes, Midnight Grey-and-orange badging, a Satin Black taillight assembly and 20-inch Black Noise wheels. The 2023 Durango R/T is offered in four exterior colors – Destroyer Grey, Diamond Black, Octane Red and White Knuckle – all of which can be paired with the Hemi Orange package.

On the inside, the 2023 Durango R/T Hemi Orange package has orange accent stitching on the first and second row SRT-style captain’s chairs along with the third row bench, door panels, center console lid, instrument panel, shift boot and flat-bottomed steering wheel (the company has not yet issued interior images).

The unique interior and exterior features of the basic Durango R/T Hemi Orange package come with an MSRP of $1,995, but there are also two more elaborate forms of this appearance package.

The Hemi Orange Plus Package for the 2023 Durango R/T comes with all of the features mentioned above, but it also adds a long list of premium amenities, including a power sunroof, the 19-speaker Harman Kardon sound system and an array of high tech safety gadgets. This package adds $4,500 to the bottom line.