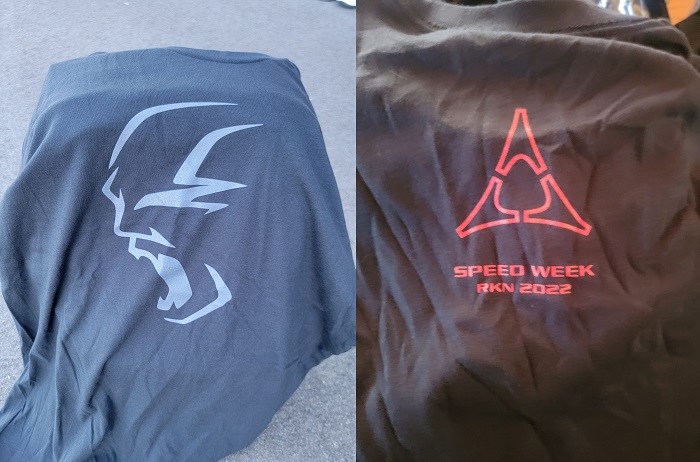 Earlier today, the Dodge brand hosted the media preview for Roadkill Nights, which happens tomorrow at the M1 Concourse in Pontiac, Michigan. The key focus of the preview was to let the media get a look at the Direct Connection Grudge Match cars, but on our way in for the preview, the Dodge team provided us with our credentials for the event tomorrow. They also gave all of the media members an interesting shirt, featuring a mysterious logo on the front.

As you can see, the back of the dark gray shirt showcases the Dodge Fratzog emblem and “Speed Week RKN 2022”. Dodge is calling the period of time starting today and ending next Saturday with the Woodward Dream Cruise “Speed Week”, so the back of the shirt makes sense. However, the front of the shirt is a mystery. In past years, the shirts being given out at Roadkill had a production Dodge brand logo, such as the Hellcat head or the 1320 bee logo. On the other hand, this year’s shirt has a human-like face with very pronounced canine teeth, leading people at the event to believe that it was some kind of demon.

While these shirts were given to the media today, similar shirts have been given away in past years to the public and if that is the case, lots of people are going to be discussing this mysterious face in the next 24 hours.

Dodge has three days of what the brand is calling “muscle announcements” next week, so we suspect that the shirt relates to some of that news, but we will have to wait until next week to know for sure.