Is it a Dodge Hornet or a Tonale mule? You can decide; most outlets have already chosen to call it an early Hornet, wearing Alfa Romeo wheels.

The difference is likely academic, anyway, since the Tonale is based on the Jeep Compass, with a 1.5 liter version of the 4xe setup; and the Compass is of course based on an adaptation of a Fiat platform. It’s automotive ping-pong.

Originally, Autopareri had an entire video, but that’s been taken down. It was taken within the factory. It didn’t take much to erase the Alfa Romeo look from the front of the car: having the bumper cross the entire front wiped out the Alfa triangle, and it appears to switch to just two lights on each side. Change the headlights, go to a conventional grille and full width bumper, and you’re most of the way there. 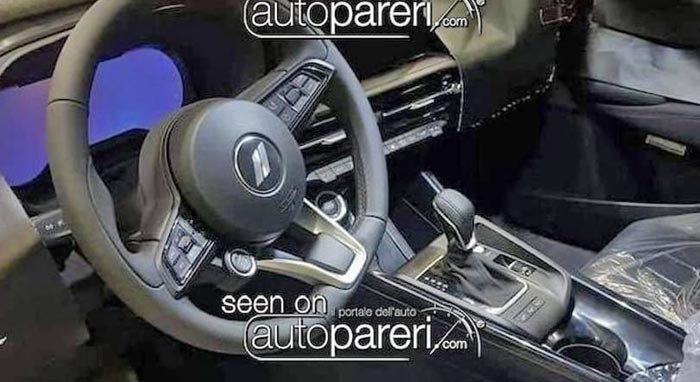 The Italian site claimed we would see a 256 horsepower 2-liter turbocharged base engine, with a 272 horsepower plugin hybrid similar or identical to the Compass 4xe. The 1.5 liter hybrid may be restricted to the Alfa Romeo Tonale, which is to sell starting in 2023; the Dodge Hornet could conceivably get to market first.

The best known Hornet so far is likely the Hudson Hornet, given fame for this generation by the movie Cars, but there was also an AMC Hornet (Hudson and Nash combined to form AMC); the first word of a Dodge Hornet came years ago, as an adapted Nissan Cube.