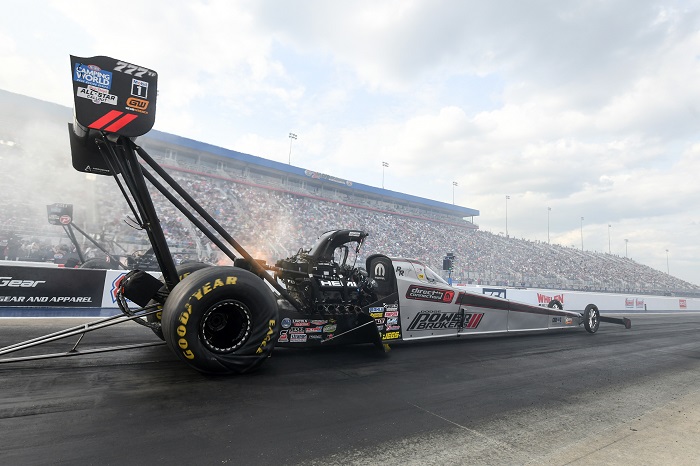 This past weekend, the NHRA hosted the Four-Wide Nationals at zMax Dragway in North Carolina. This is one of the tracks with four lanes, leading to groups of four in each pass rather than two. This unique layout leads to a unique racing format, with two winners and two losers in each run leading up to the finals, where the order of first through fourth is decided in a single run.

Unfortunately, the four-wide format wasnt kind to any of the Team Dodge drivers, with all of the top Dodge funny cars and Leah Pruett’s top fuel car all losing before making it to the shootout of the final four.

The Dodge Charger funny cars hit the track fast in North Carolina, with Cruz Pedregon taking the second spot in the first round while Hagan set fourth. John Force was the top qualifier in the first round with a 3.858 at 333.25mph. In the second round, Force ran a 3.850 to stay in the top spot, but Hagan jumped up into second with a 3.867 and Cruz dropped to fourth with his 3.876. All of those times would carry through the final round of qualifying, but when Robert Hight ran a 3.876 at 329, he moved into fourth, pushing Pedregon into fifth.

Meanwhile, over in the Top Fuel class, Leah Pruett had her best qualifying outing of the season in her Dodge Power Brokers/Direct Connection rail car, heading into eliminations in the second spot with a 3.686 at 327.51 miles per hour.

In the first round of eliminations, Matt Hagan and his Dodge Charger Hellcat funny car took on Mike McIntyre Jr, Blake Alexander and Paul Lee. Hagan beat them all out of the hole and got to the starting line first, winning the pass with a 3.895 at 331.69 while McIntyre finished second to advance with a 3.966 at 316. Alexander and Lee both had junk runs and headed home after the first round. Meanwhile, Cruz Pedregon and his Charger took on Tim Wilkerson, Robert Hight and Jim Campbell. Cruz crushed everyone on the tree with a .037, getting out strong with Hight (.057), but the Camaro got to the finish line first with a 3.880 at 332 while Pedregon finished second with a 3.921 in his Dodge. Wilkerson and Campbell both had strong runs, but with slow reaction times, they went home right away. 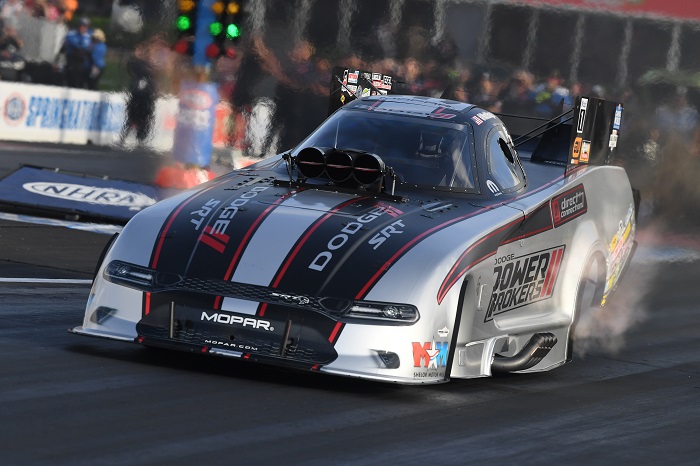 In the second round, Hagan took on McIntyre again, along with Ron Capps and JR Todd. Capps pulled a .035 reaction time and won the pass with a 3.954 at 323.89 in his new Toyota Supra and Mike McIntyre finished second as Hagan ran into problems and coasted through in the 8s, ending his day. Unfortunately, Pedregon was the slowest from the line in his second round race with Robert Hight, Bob Tasca III and John Force and shortly after launch, he ran into problems and coasted across the finish line. Force and Hight both advanced to the next round where they took on Ron Capps and Mike McIntyre – with Force taking the class win in his Chevrolet Camaro.

Meanwhile, after qualifying in the second spot in Top Fuel, Leah Pruett lost a tight race with Spencer Massey, Brittany Force and Tony Schumacher, with Force and Massey advancing with the Tony Stewart Racing rail car was packed into the trailer. Mike Salines would go on to win the Top Fuel class at the Four-Wide Nationals.

Even though Matt Hagan lost in the second round, he still holds the lead in the early championship race with 567 points earned in his Dodge Charger Hellcat funny car. Robert Hight is second, 22 points out, and Cruz Pedregon is fifth, 192 points behind Hagan. However, with just six events being run so far, there is lots of time for things to change during the course of the lengthy NHRA season.