If you follow the Dodge brand on Facebook, you likely know that the social media channel is quite busy, often posting information about the current models along with sharing images of owner’s vehicles from their own social media accounts. Earlier today, the Dodge Facebook account shared a “story” showing a bingo board with a long list of Dodge and Mopar oriented spaces.

Some of you may have seen it, but for those who did not, we have included a blank board below. As you can see in the images here, the brand wants people to mark off the squares that apply to them and share the upgraded image on their own Facebook wall, tagging the Dodge page in the post.

The image below shows the my Dodge bingo board cropped to fit. As you can see, I have not yet gotten a Mopar tattoo and I have never owned a Scat Pack model, a Charger or a Durango.

I have seen many examples of Dodge bingo boards that have been filled out by enthusiasts and a surprising number have not been to Roadkill Nights. I have been to every Roadkill Nights event held in Detroit and it should absolutely be a bucket list item for every Dodge fan. It is unlike any automotive event you will ever attend, from the thrill rides, Dodge displays and sprawling show-n-shine area to the legal street racing program on Woodward Avenue. Many Dodge fans don’t go to Roadkill Nights because it is the same weekend as the Ohio Mopar Nationals, but as someone who went to the Nationals every year from the mid-90s through the start of Roadkill Nights – it is worth missing the Mopar Nationals to experience Roadkill Nights at least once.

The same A- B- and E-bodies classics you have seen racing at National Trails for the past twenty years will still be there next year. Go to Roadkill Nights while you still can. It it not Dodge-only, but it is Dodge-heavy and it is a fantastic event. 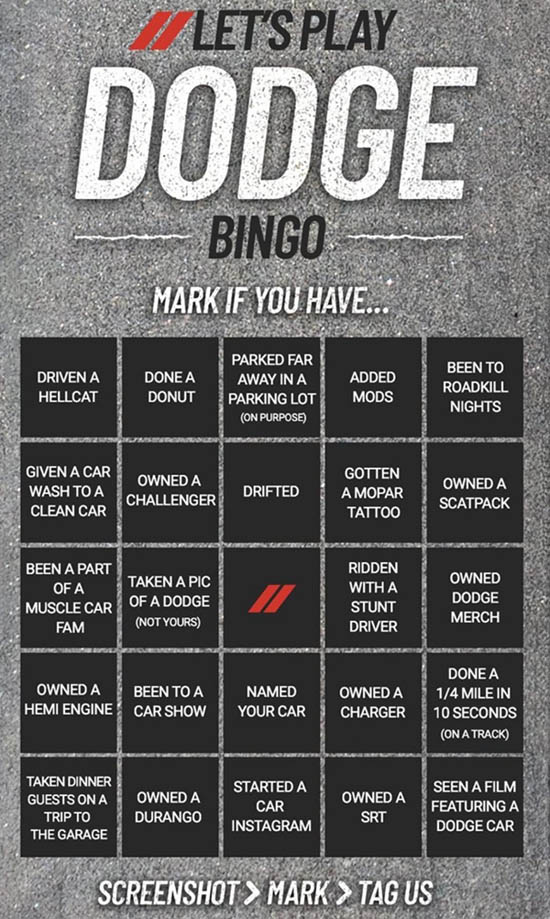 Anyways, if you are a Facebook user, save the blank Dodge bingo board above to your device, fill out the squares that apply to you and post it on your wall, tagging the Dodge brand.