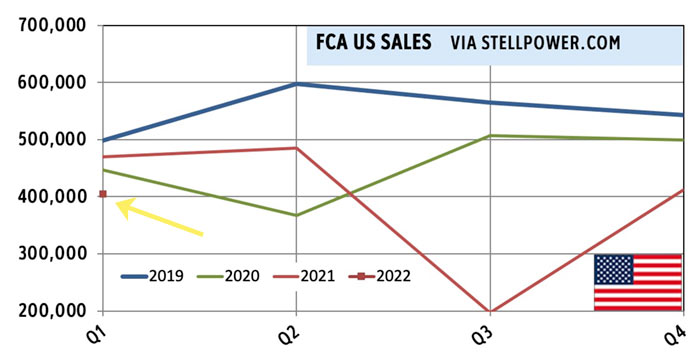 FCA US’ first quarter sales fell by 14%, largely on supply constraints, as we reported on Friday. However, FCA appears to have gained market share in the United States—largely at the expense of General Motors, which reported a hefty 20% drop from Q1 2021 to Q1 2022, and Ford.

The chart below shows U.S. sales for most major automakers, leaving out Volkswagen and minor players who have not reported U.S. sales yet.  The overall drop in sales was 15.7%, with all players other than Mercedes reporting in. In order of Q1 sales:

* Industry sales excluding Mercedes, which has not reported; updated to add Volkswagen and Tesla.

Higher-end automakers did better than the mass market, with BMW posting a 4% gain to 80,980; Tesla reporting a 4% gain; and Rivian reporting 900 sales (from zero, earlier). Volkswagen’s luxury brands Lamborghini and Porsche both dropped, Porsche by 25%, as the war in Ukraine exacerbated their supply problems; Bentley did post an increase of 79 cars to 739. At Ford, the Navigator’s fall (56%) and the dropping of both cars (MKZ and Continental) caused sales to fall by 24.6% overall. Dropping the Fusion only cost 3,000 sales; the Mustang lost more than that many with a 51% fall.

Among the mass markets, the biggest drop was at Nissan, followed by Honda and GM; Toyota, America’s best selling automaker, solidified its position by dropping less than GM, though they dropped slightly more than Stellantis. Ford fell by 17%, ceding more market share to Stellantis, though Ford is poised for a major comeback as they have many vehicles sitting around and awaiting missing parts.