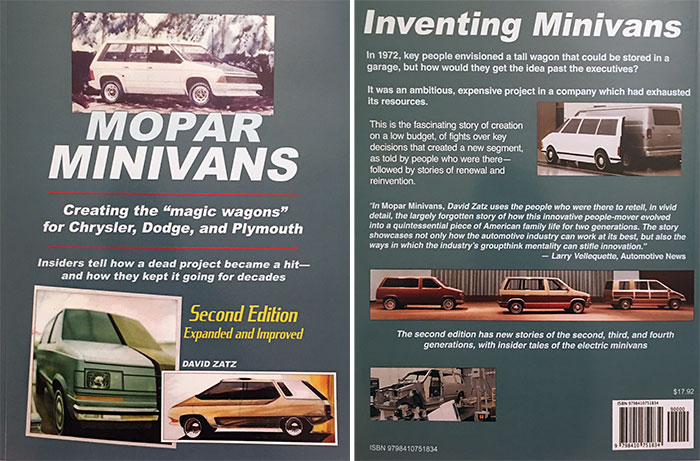 Two years ago, Mopar Minivans, the first biography of the Chrysler minivan which went deeply into the origin story, hit the stands. It was succeeded a year later by a revised version which went up to the Pacifica, The Rise and Reinvention of Chrysler Minivans.

2022 brought a revisiting of the Mopar Minivans book, Mopar Minivans, Second Edition (technically the third edition). This book has much more information on development of the “1.5 generation,” the “cab forward” second generation, and the third generation, with input from engineers and leaders. The language was tightened up, and John Rush provided a superior level of proofreading, so the page count is unchanged despite a good deal of new material. That allowed for a price drop, from the original $19.84 to $17.92.  A Kindle ebook version is $6.36.

The original story of the minivan started in 1972, when custom vans were starting to catch on; the appearance of the 1984 minivan was developed in the 1970s. The book includes a quick overview of how Chrysler adapted the basic architecture of its French subsidiary’s new car to all of its own front-drive vehicles, including minivans; it goes on to the upgrades of the next generation, and the challenges of cab-forward design (including packing the engine compartment so tightly that air couldn’t circulate). There are personal stories and memories along with the facts and figures—and a full accounting of the electric TEVan and EPIC minivans. This includes a series that was ready for full production, but rejected at the last minute by a management afraid of liability problems.

The current version of The Rise and Reinvention of Chrysler Minivans shares the updated text of Mopar Minivans: Second Edition. The book is available from Amazon in softcover and Kindle formats. The writer has declared that this will be the final version.