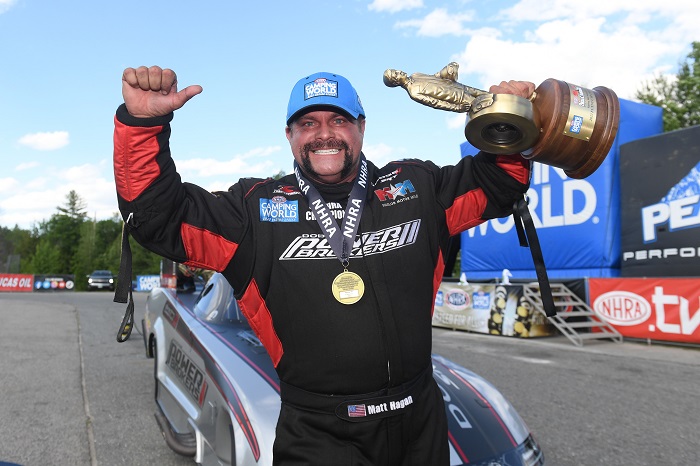 This past weekend, the teams of the NHRA Camping World Championship Drag Racing Series headed to New England Dragway for the eighth stop on the 2022 schedule and for the third time this season, Matt Hagan took home the win in his Tony Stewart Racing Dodge Charger SRT Hellcat funny car. Of course, this also marks the third win for new NHRA team owner Tony Stewart, who has certainly stormed into the world of drag racing with a remarkable amount of success. 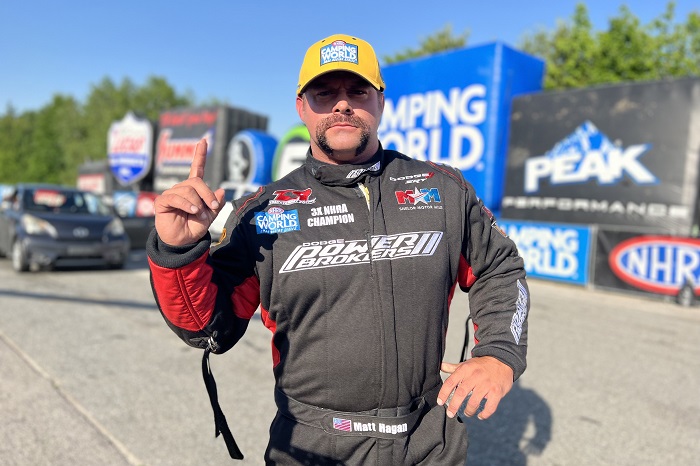 “It was just a great weekend,” said Hagan who earned his 42nd career Funny Car victory with his team’s performance at the New England Nationals. “I can’t say enough about Dickie (Venables, crew chief). Nothing really needs to be said – our Dodge Power Brokers Charger SRT Hellcat speaks for itself. Mike Knutson, Alex Conaway, all the boys wrenching on the car, they just do a great job. It’s one of those things I don’t even think about anymore because each and every one of those guys has earned my trust with my life. So when I crawl in the car, I don’t think about anything other than just leaving the starting line.”

Fortunately, Hagan is doing a great job of leaving the starting line, allowing him to stay atop the standings for the 2023 NHRA Funny Car Championship with three wins and three runner-up finishes in eight races.

Charging Out of the Gate

As has often been the case this season, the Dodge Charger funny cars were quick in qualifying from the first round, with Matt Hagan setting the pace in Q1 with a 3.878 at 332 miles per hour. That time would carry through the second and third rounds, allowing Hagan to claim his third top qualifying spot of the season – besting second place qualifier John Force and his Chevrolet Camaro by more than two miles per hour on the big end. 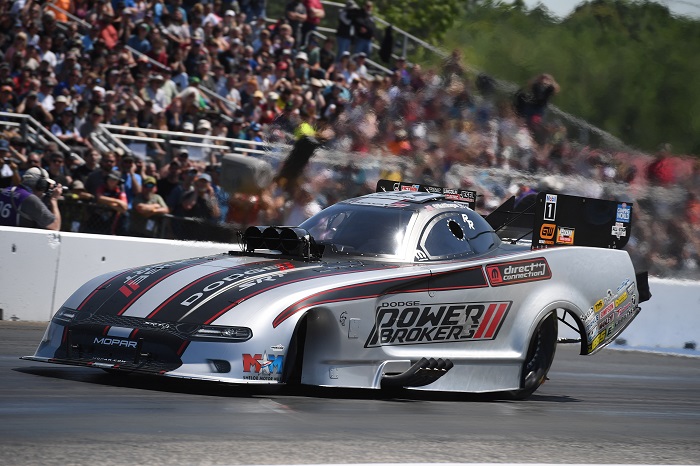 Fellow Dodge Charger funny car driver Cruz Pedregon struggled in the first round, but in Q2, he laid down a 3.958 at 322; good for the fourth spot on the ladder. He would go on to run a 3.901 at 324 in Q3, keeping him in the fourth spot as the field headed into eliminations.

Between Hagan and Pedregon, the two John Force Racing Chevrolet Camaro funny cars qualified second (Force) and third (Hight), so even with the demise of the Don Schumacher Racing funny car program, the Dodge funny cars are still dominant with new teams.

In the first round of the 2022 NHRA New England Nationals Matt Hagan and his Dodge Charger SRT Hellcat funny car easily knocked off Dale Creasy, even though he didn’t turn in a solid run. Pedregon, on the other hand, did have a solid run in the first round of eliminations, running a 3.910 to beat Bob Tasca III.

In the second round of eliminations, Hagan had a single pass due to the 14-car field while Pedregon faced off with JR Todd. Cruz held the starting line advantage, but when he ran into problems around half track, Todd’s Toyota cruised to the win. Meanwhile, Toyota driver Ron Capps beat John Force and Robert Hight beat Alexis DeJoria to join Todd and Hagan in the semifinals.

In the semis, JR Todd had a better reaction time than Hagan, but the Dodge driver drove around him on the big end to advance to the finals. On the other side of the ladder, Capps had an early lead, but when he ran into issues, Hight easily took the round win – allowing him to face Hagan in the finals for the third time this season.

Robert Hight beat Matt Hagan in their previous two final round meetings this year, but when Hagan grabbed an early advantage on the tree (.040 to .059), Hight found himself trying to play catch up. His hopes were dashed when he ran into issues mid-run while Hagan roared across the line with a 3.922 at 327.98 miles per hour. 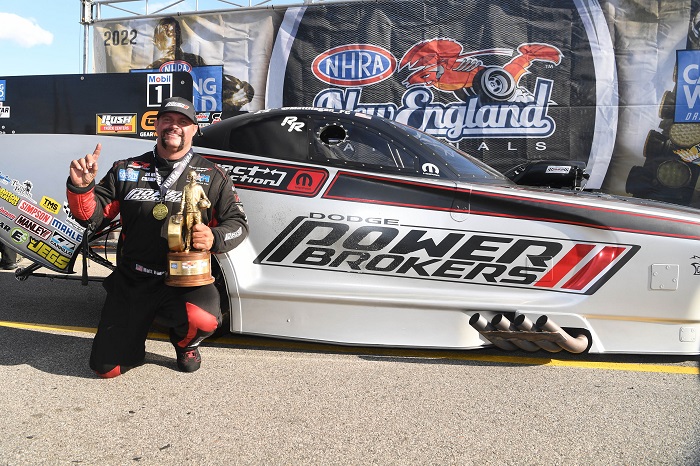 “I think it’s going to be a dogfight all year between Robert Hight and us. You can’t leave out Ron Capps, John Force, J.R. Todd and all the other guys out there. It’s a dogfight out there and I love it. I was so up on the wheel there and was like, ‘Come on, come on.’ Hight is a bad dude out there and he’s hard to get around and he’s had our number three times already this year. I have a lot of respect for Robert Hight and what he does. He drives the same type of style I do and that’s no BS – just drive your racecar. That’s what we did today. This Dodge Power Brokers team – I love you to death and trust you with my life. I wouldn’t trade you for anyone.”

After the first eight races of the season, Matt Hagan sits atop the leader board for the Funny Car Championship with 673 points. Robert Hight is a close second (-15), but there is a big jump to the rest of the field. Capps is third (-112), Force is fourth (-226) and Pedregon is fifth (278). However, with the Countdown to the Championship playoff system, the size of the point lead doesn’t matter, but for now, Matt Hagan is the one to beat in the funny car big leagues.