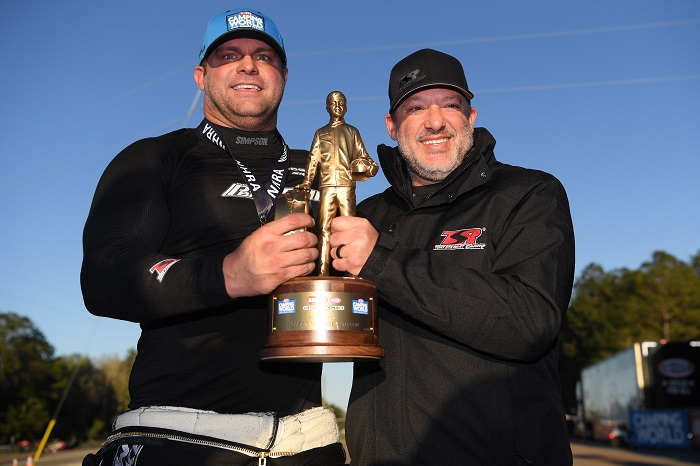 Tony Stewart is one of the most successful men in American motorsports, so it comes as little surprise that it only took him three races to win as a team owner at the highest level of drag racing. Yesterday afternoon, Matt Hagan drove his Dodge Charger Hellcat funny car to the win at the 2022 Gatornationals – scoring his first win since leaving Don Schumacher Racing and getting Tony Stewart Racing the team’s first national event win.

“Congratulations to Matt Hagan and the Tony Stewart Racing team for their first win of the 2022 season aboard the Dodge Power Brokers Funny Car at the NHRA Gatornationals,” said Tim Kuniskis, Dodge Brand Chief Executive Officer – Stellantis. “It’s great to see Matt earn his 40th career win and continue to demonstrate what Dodge//SRT performance looks like and what enthusiasts can expect from Dodge Power Brokers and Direct Connection.” 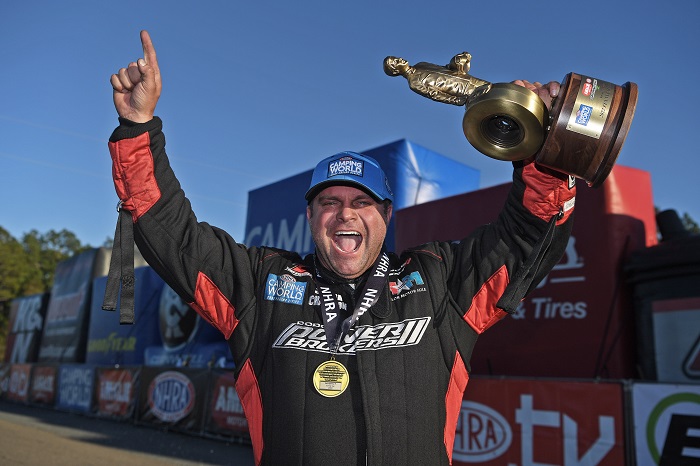 The 2022 NHRA Gatornationals didn’t get off to a great start, with rain and cold temperatures preventing qualifying on Friday and delaying qualifying on Saturday. As the Funny Car class (and others) only made one qualifying pass. Fortunately, with only 16 cars in attendance for that class, everyone who made a pass made it to eliminations, but that didn’t matter to Matt Hagan or Cruz Pedregon. 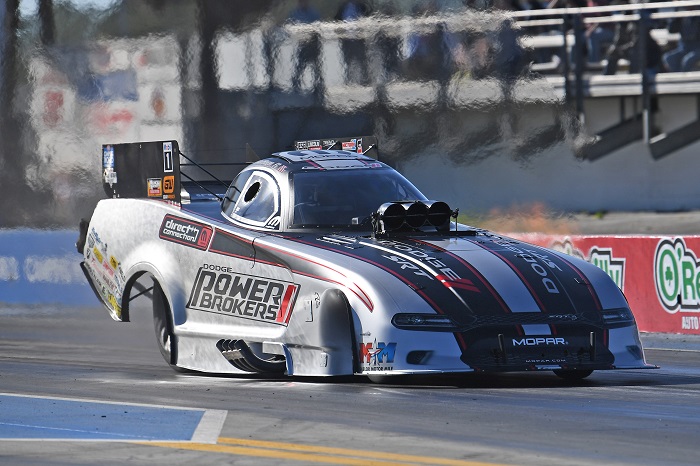 Pedregon ran a 3.891 at 327 mph to grab the 3rd spot on the class ladder in his Dodge Charger while Hagan’s 3.898 at 320 put him in the 4th spot. The short field did help Ron Capps, who struggled in his sole qualifying run, starting in the 10th position on the ladder with a 7.487 on what would have been a throw-away run if not for the rain-shortened qualifying schedule.

The rain and cold weather shortened qualifying, but it also had a big impact on the elimination rounds for every team. In most cases, when a driver hits the track for the first round of eliminations, he or she has already made three passes down the track, but in this case, they had all made just one. Also, due to the rain, track conditions were in question, while the cool air allowed the supercharged engines to make big power. The combination of big power, questionable surface quality and little seat time led to an unusual day of elimination runs. 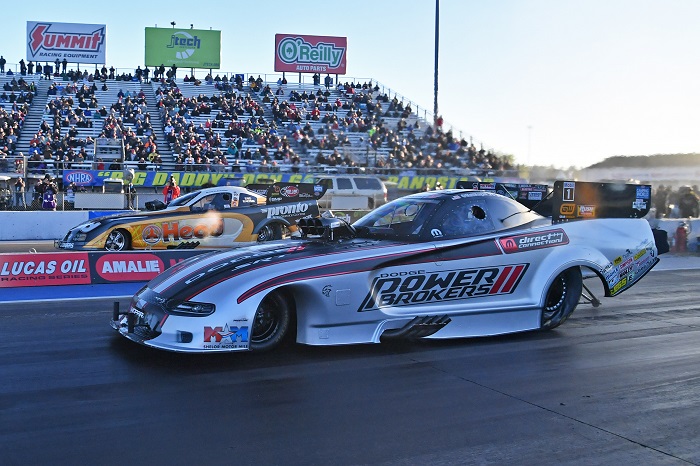 In the first round, there were so many rough passes that there was not a single pair of cars that both hit 300 miles per hour, with many drivers winning with relatively lackluster times. Hagan’s Charger ran a 5.266 at 258 top beat Dave Richards, who ran in the 9s with issues. Top qualifier Robert Hight advanced with a 8.457 at 82 miles per hour and 2nd place qualifier Tim Wilkerson lost to John Force, with Force’s Camaro running a 4.332 at 289. Fortunately, Pedregon and Capps both made strong runs to advance, with Capps’ 3.864 being the quickest of the class for the first round.

In the second round, things didn’t get much better. Top qualifier Hight had issues and lost to Chad Green, Hagan ran a 4.021 but still beat Terry Haddock, who had issues and Pedregon red lit on the start. However, Ron Capps continued to look strong, running the quickest time of the round once again with a 3.913, beating John Force.

In the third round, Capps’ luck ran out when he smoked the tires right after launch, giving the easy win to Blake Alexander’s Ford Mustang with a 3.983 at 322. On the other side of the bracket, Hagan beat Green’s Mustang at the starting line and never looked back, advancing to the finals with a 3.894 at 332. 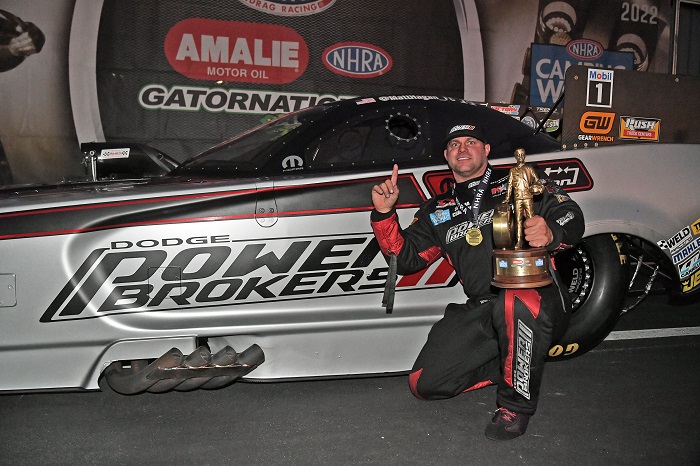 In the finals, the track struck once again, this time forcing Alexander to lift early in the run while Hagan roared to victory with a 3.910 at 330 miles per hour. As mentioned above, this gave Tony Stewart Racing its first NHRA win.

“Our NHRA Nitro team is appreciative of the long-standing relationship our drivers Matt Hagan and Leah Pruett have had with Dodge//SRT and Mopar,” said team owner Tony Stewart. “Everyone in racing knows the value of OEM support and its importance to a team’s success, so we’re pleased to have that relationship with Dodge in drag racing and how that quickly culminated in our first Funny Car win at the NHRA Gatornationals.” 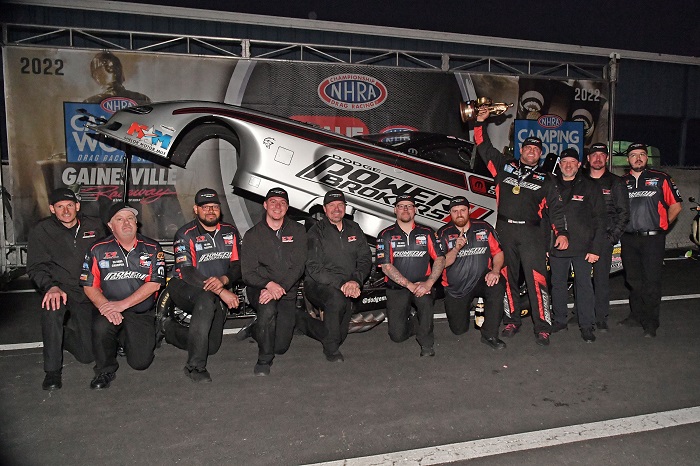 “To get this first win at the Gatornationals and Tony Stewart’s first win in a drag car, it’s pretty awesome,” said the three-time NHRA Funny Car World Champion Matt Hagan. “He wants to be here, and it says a lot for our sport. It was a good weekend for Tony, a good weekend for NHRA and I’m just very blessed and humbled to be here. I want to make sure I’m showing up on the starting line and doing my part and I just know what this team is capable of. It’s a lot of tough competition, but as a driver that’s exciting. It just was a big weekend for me personally because I’ve been wanting to win this race and check it off on my career box, and I think this allows me to accomplish everything I’ve ever set out to do in NHRA.” 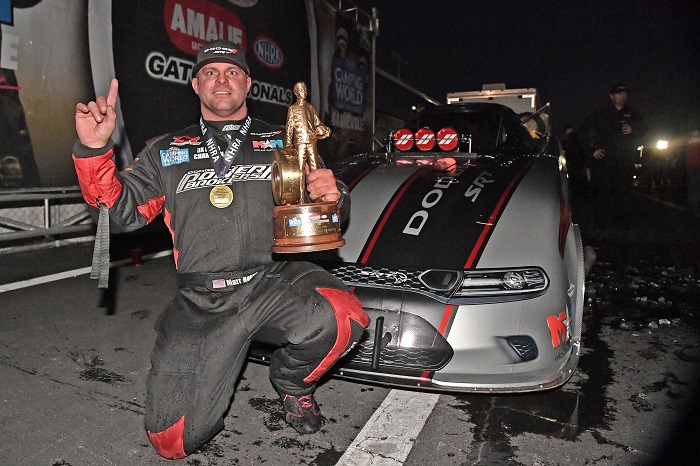 After the third event of the NHRA season, Robert Hight holds the early lead in the Funny Car Championship chase with 308 points with Hagan in second (-11), Capps in third (-77), Pedregon in fourth (-120) and John Force is in fifth (-153). In short, Camaros and Chargers continue to dominate the NHRA Funny Car class, even with the demise of the Don Schumacher program after 2021.