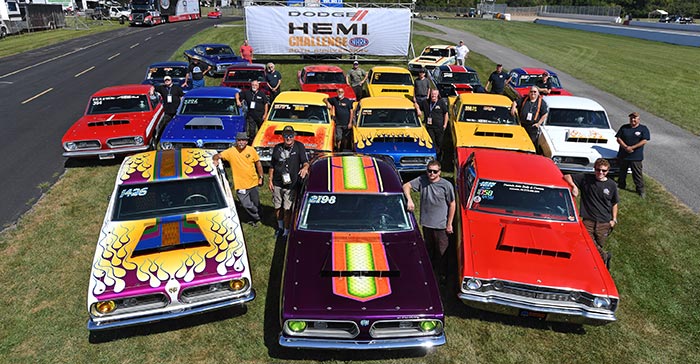 The 21st edition of the Dodge Hemi® Challenge will be held at the NHRA Nationals at Indianapolis on September 1-2. It includes wheel-standing and side-by-side racing of vintage Hemi-powered 1968 Dodge Dart and Plymouth Barracuda “package cars,” which dominated the Super Stock class for more than five decades.

Paul Rossi, renowned Mopar drag racer, engine builder, engineer, and team owner, is the grand marshal. He campaigned one of the original Hurst-built ’68 Barracuda Super Stock cars. He said, “It’s just fantastic to have a category that calls these classic muscle cars back out of the garage… I guess I’m now the face of the Direct Connection old guard.”

The racing legend, who also won multiple IMSA championships and Pike’s Peak endurance races, will join Direct Connection spokesperson Chuck Spieser for a question-and-answer session on Saturday, Sept. 3, at 3:30 p.m. at the Dodge//SRT and Mopar exhibit in the Manufacturers’ Midway.

Among the over 20 entrants will be defending winner Steve Comella  four-time winner Jim Daniels Jr. (2016-2019), the winner of the first Hemi Challenge, Bucky Hess II, Jim Pancake, and Joe Teuton. The event will be streamed live on NHRA.TV on Sept 1-2, with highlights expected to be part of the FS1 qualifying show on Sunday, Sept. 4, from 1 to 3 p.m. ET.