The Modern Street Hemi Shootout is the premier drag racing series for modern Mopar performance cars and has been for years. Across the many classes, you will find the world’s quickest examples of the modern Dodge Challenger, Dodge Charger, Dodge Magnum, Chrysler 300, Jeep Grand Cherokee and Ram 1500, but there are also groups of near-stock cars packing a modern Hemi engine. Whether you are a seasoned racer with an 8-second race car or you have a new Hellcat car and you are interested in hitting the track, the Modern Street Hemi Shootout events are the best places for late model Mopar owners to go racing. We have included a handful of videos here offering just a quick glimpse of what the series has to offer from past events.

For the 2022 season, there are seven races on the Modern Street Hemi Shootout schedule, six of which count towards the season point championships. There are two key changes for 2022. One pertains to safety improvements, with the Outlaw, Heavyweight and 8.50 classes all required an engine “diaper” to catch oil in the case of engine failure. This is also encouraged for all racers, as blowing an engine and putting oil down makes for a dangerous situation for everyone involved. The second change is the return of the 9.50 index class.

As a reminder for those who have never participated in an MSHS event, the racer entry fee includes the Bracket class and one index class of your choosing – whichever best fits for your vehicle. There are index classes for 8.50, 9.50, 10.00, 10.50, 11.50 and 12.50, along with classes like Hemi Outlaw and Heavyweight, as well as the free Rookie class.

The season begins on Sunday, March 27th with the Legmaker-sponsored event at Orlando Speed World, but that event technically begins on Friday with the Diablosport pre-event track rental testing session, followed by the Diablosport Horsepower Wars on Saturday. In other words, you can spend all three days racing in Florida to start the season. 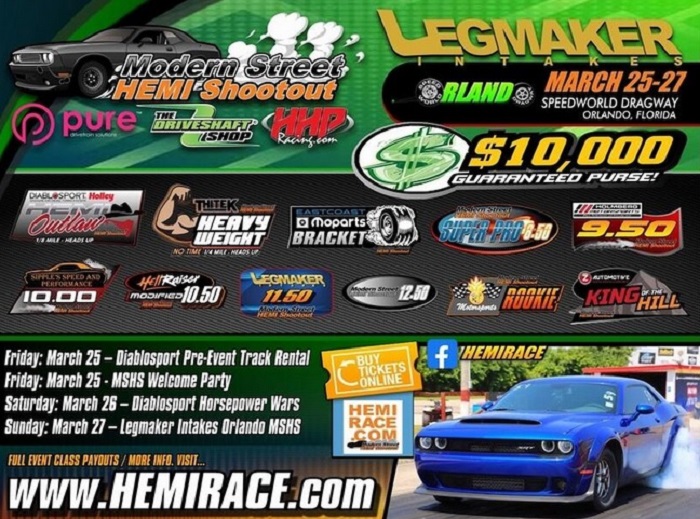 The second event is April 16th at Virginia Motorsports Park, sponsored by Demon Performance, and that event also has a track rental foe testing the day before.

The third event of the season is a two-day event at The Rock in North Carolina, sponsored by Sipple Speed and Performance. This includes two full days of official MSHS racing on Saturday, May 14th and Sunday May 15th, along with a track rental for testing on Friday the 13th.

The fourth stop on the 2022 MSHS schedule is sponsored by AAD Performance and it is being held at Heartland Motorsports Park in Kansas on June 11th.

The fifth race of the season is the ThiTek Hemi’NSanity at Milan Dragway, but it is held during the weekend of the Woodward Dream Cruise on August 19th and 20th. The official MSHS event is held on Friday the 19th and on Saturday, the MSHS has the best spot to hang out along the Dream Cruise route for Mopar lovers. There is also a pre-event track rental being held on Thursday the 18th.

The final points race of the 2022 MSHS season is sponsored by East Coast Moparts, it is another two-day event and it is being held at Maryland International Raceway on October 21st and 22nd. In addition to the two full days of points racing, there will be a pre-event track rental on Thursday the 20th.

Finally, the last event of the season does not count towards the championship standings, but it promises to offer some of the quickest racing of the season. The High Horse Performance Final Stand event at Cecil County Dragway on Saturday, November 12th will have the best air of the year, leading to big power and big numbers.

If you like the racing action shown here and you want to see it live, these events are great for racers and spectators alike. For more information about any of the 2022 Modern Street Hemi Shootout events, click here for a look at the whole schedule. Click any individual event for full information on that event.

Of course, the MSHS wouldn’t be able to hold such great events if it was not for the many sponsors – all of whom offer products or services pertaining to modern Mopar performance.