While some would wait for New York to reveal a new engine, Allpar noticed that Jeep has shown it on the Build and Price section of its web site. Here is the first photo we’ve seen of what appears to be the inline twin-turbo six: 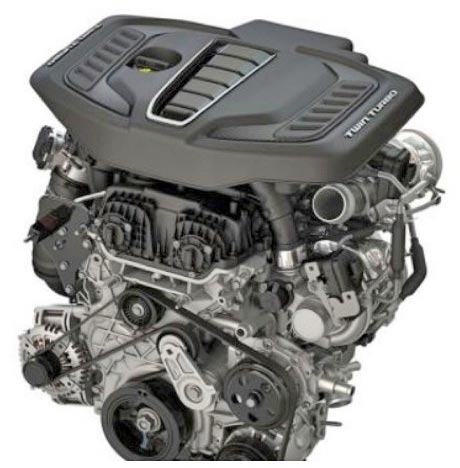 The 2-liter 4xe runs the Wrangler to acceleration times close to those of the 392 (6.4 liter) V8, suggesting that the 3-liter may well beat the 392. The 4xe also runs on regular fuel, while the 392 requires premium; if the GME T6 also takes regular fuel and outpowers the 392, it would certainly provide a rationale for charging an extra $2,000.  (It might still take premium.) And for those who insist on a V8, the V8 will be there as the base engine.

To be fair, the 4xe is a hybrid system, giving the extra power of a motor, while eagle-eyed reader Phoenix noted that the photo shows an alternator, which means it is not a hybrid—just a standard gasoline twin-turbo engine.

The twin turbo engine is an option on the Grand Wagoneer, which already comes with the 6.4 liter engine. It should provide greater acceleration than the 6.4, due to its wider peak torque range.

Perhaps it is appropriate for Allpar to break the news, since that site, before its conversion to a primarily-forum format, also broke the news of the GME T6 in the first place—five years ago.

The new engine will be paired with the 8HP75 automatic transmission, engineered by ZF.  For more on the twin-turbo inline six-cylinder, see our past reporting.

Update: the reference has been taken down from the Jeep.com web site, and the Hurricane Six has been officially announced.