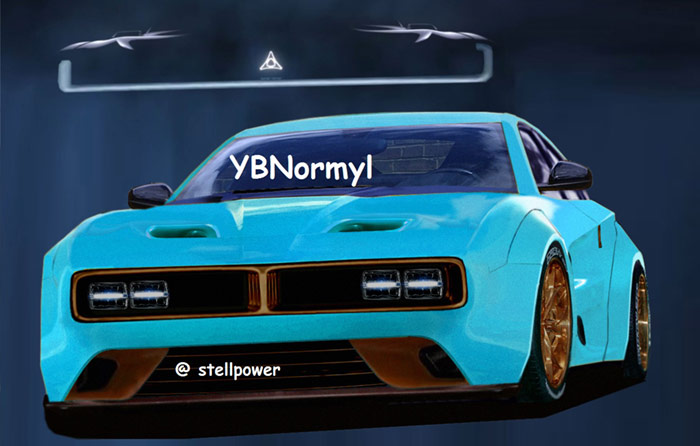 Stellantis showed teasers of a Charger and Challenger at late last year. We don’t know if these are just artists’ renditions or if they come from real prototypes; but one can connect the dots, as artist YBNormyl did.

In this rendering, YBNormyl overlayed parts from the blue illustration onto the current Charger, reporting that the outlines did line up, so to speak. Given rumors claim the 1999 Charger concept car had a major influence on the next Charger, he tried to fill in the gaps.

Most future Charger discussion is still speculation now. We are fairly sure an LB-bodied Challenger is in the works, scheduled to use the new turbo inline six engine; but little is known about the Charger. Perhaps Dodge will make have a Charger SE and a Charger R/T, as Ford has a Mustang and Mustang Mach E. Confusing matters somewhat are rumors that the large cars will all move to Belvidere, along with the production version of the Chrysler Airflow, leaving Brampton either refitted for parts or some such (analysts see a battery plant there, but that’s probably pure speculation). A couple of insiders claimed that Brampton is problematic because of some tight squeezes and low ceilings; state of the art when built by AMC in the 1980s, Brampton was presumably (and ironically) not designed for SUVs, according to these sources. It was to make Renault-based, American-engineered sedans. Then again, someone else claimed to have seen plans that keep the plant going through 2027.

It’s possible that the Auburn Hills leaders do not yet know what they will do with Brampton, and different people have seen different proposals for the future. This sort of thing has afflicted the rumor mill before—as have misleading leaks, misunderstandings, and sheer wishful thinking.

In any case, YBNormyl developed this rendering, again, by combining the current Charger and the announced and implied styling direction for the brand.

1 thought on “How accurate is this 2024 Charger rendering?”