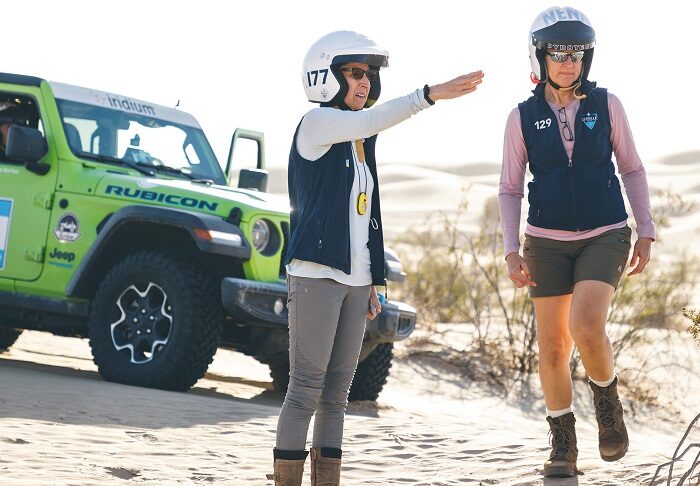 After a clean sweep of the podium at the 2021 Rebelle Rally, Jeep will support three teams in the 2022 rally, which covers over 1,500 grueling off-road miles over eight days in the deserts of Nevada and California. Each team will have a Wrangler 4xe hybrid-electric with a four-cylinder gasoline engine, aiming to defend their titles in the Overall, Electrified, and Bone Stock classes. Jim Morrison, head of Jeep North America, said that the teams included “last year’s first-place winners Nena Barlow and Teralin Petereit and a Navajo team that includes Jeep employee Kaitlyn Mulkey.”

Established in 2015, the Rebelle Rally is the first women’s off-road navigation rally in the United States. Technology and electronic devices cannot be used; instead, competitors must rely on their driving, map, and compass reading skills along with vehicle capability to achieve several checkpoints along some of the most punishing terrain in America. Sixty teams—120 Rebelles—are participating, coming from four nations (including Kenya) and 24 states; around one third of them are using their personal Jeeps.

Rally founder Emily Miller said, “Jeep has believed in and supported the Rebelle Rally since the beginning, we are pleased and honored with their return.” The 2022 rally takes place from October 6-15, 2022, starting in Incline Village, Nevada and finishing in the Imperial Sand Dunes in Southern California.

Nena Barlow owns and operates Barlow Adventures, which provides 4WD training, Jeep rentals and guided trips in the southwest U.S. Teralin Petereit is a nurse who has logged countless trails and competitions over the years. Emily Winslow is a project manager who specializes in first responder pre-employment testing. Mercedes Lilienthal is an Oregon-based automotive journalist who specializes in adventure travel and often pens stories on female leaders in the automotive industry. Racquel Black is an enrolled member of the Navajo (Diné) Nation with a background in client services and years of involvement with local Navajo community projects and events. She is currently working with Change Labs, Shonto Group Inc. and the Shonto Economic Development Corporation. Kaitlyn Mulkey is also an enrolled member of the Navajo (Diné) Nation; she manages Jeep brand tribal relations, is president of Stellantis’ Indigenous business resource group, and works with the Jeep Badge of Honor and Jeep Wave programs. Mulkey has been riding dirt bikes since she was 7 years old and has always been mechanically inclined. She earned her mechanical engineering degree from Texas A&M and started her career with Stellantis as a fuel economy test engineer.