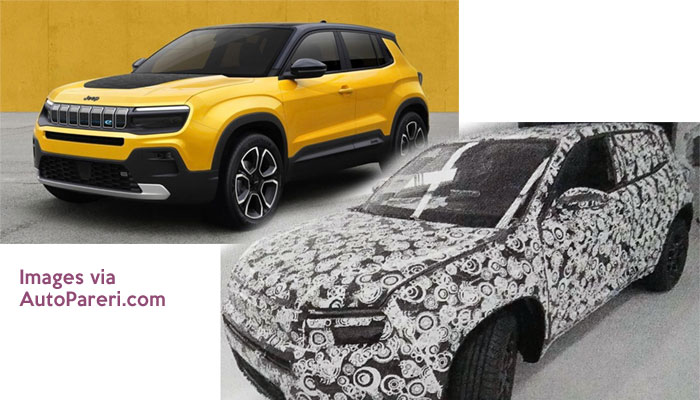 In March, Carlos Tavares showed renderings of a new Jeep battery-electric (the color photo) which was to be sold in Europe, built in Poland, and measure around 16 inches less bumper-to-bumper than the Renegade which it closely resembles.

Next, a spy shot, which appears to be an insider photo (the scan looks as though it’s from a newspaper, due to halftoning) appeared in the Italian AutoPereri forums. The spy shot might be of the same vehicle, and it might be the Indian version (it’s to be made in Poland and India). The main change seems to be the side mirrors. Autoblog’s Jonathon Ramsey covered the story, writing that the junior Jeep is on the Peugeot CMP platform, will be dubbed Jeepster, and will share with a future Fiat (likely the next Panda) and an Alfa Romeo. Ramsey wrote that the Jeepster would likely have Peugeot power, including the gasoline engine, and that the gasoline version might not have all wheel drive.

The original Jeepster was not especially off-road capable; it was mainly made for fun, but didn’t sell particularly well, even by Jeep standards of the time. The Jeepster only lasted for three model years.