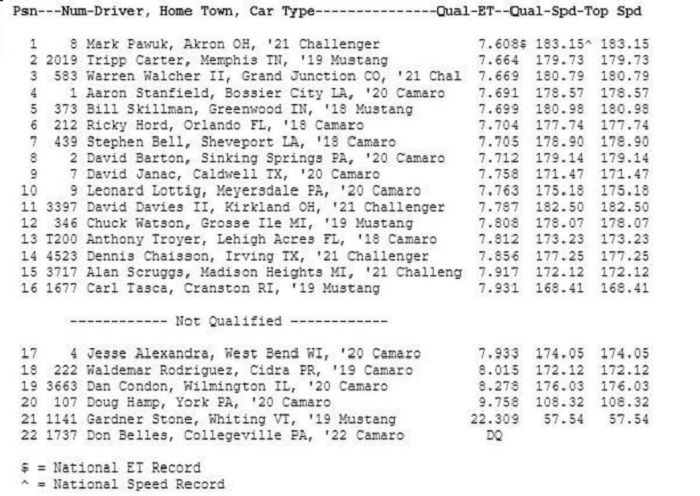 The 2022 Gatornationals has been hit hard by Mother Nature, with cold rains hampering qualifying on Friday and Saturday, but when the track dried out, the Dodge Challenger Drag Pak teams made the most of the crisp, cold air. With a density altitude number around 300 feet at Gainesville Raceway on Saturday afternoon, all three of the Don Schumacher Racing Challengers turned in smokin’ fast runs on their sole qualifying pass. 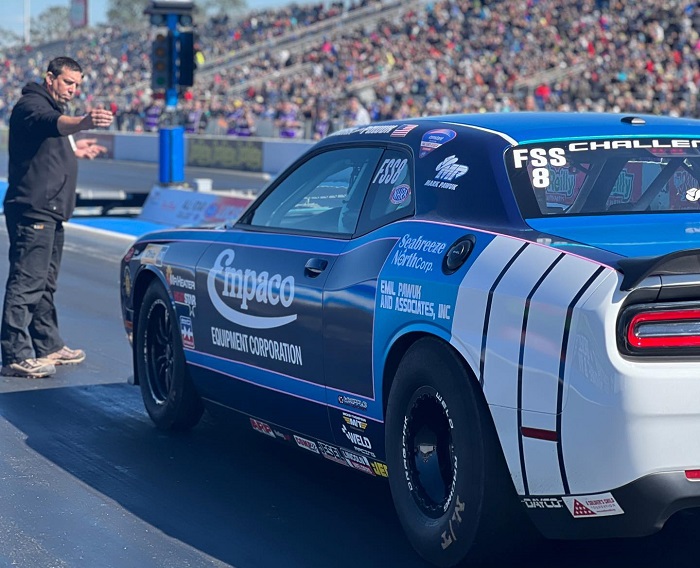 Most notably, Mark Pawuk drove his Dodge Challenger Drag Pak to a 7.608 at 183.15 miles per hour, setting the quarter mile elapsed time and speed records for the Constant Aviation Factory Stock Showdown class. Of course, in setting a pair of world records, Pawuk qualified in the top spot for Sunday’s Gatornational eliminations.

David Davies was the first Dodge Challenger Drag Pak to set a record at the Gatornationals, running a 7.78 at 182.5 miles per hour – claiming the quarter mile speed record for the class sponsored by his company (Davies is the CEO of Constant Aviation) and qualifying 11th. Per Davies Facebook post, that record only lasted “about 90 seconds”, but he set the pace for the Team Mopar racers. As qualifying went on, Mark Pawuk set the class E.T. and MPH records with the 7.608 at 183.15 miles per hour while the third car in the DSR FSS stable – Warren Walcher – ran a 7.669 at 180.79 miles per hour and qualified 3rd.

This doesn’t come as a huge surprise, as one of the Don Schumacher Racing Dodge Challenger Drag Paks ran a 7.67 earlier this year in testing. We asked DSR Crew Chief A.J. Berge about that run and he confirmed that it was one of their cars, but he stated that the run was made in “conditions that we likely won’t ever see during our race season”. Well, as mentioned above, the cold temperatures led to the perfect conditions for big power and solid traction. Click here for a look at Pawuk’s record run on the NHRA website.

Finally, two other Dodge Challenger Drag Paks qualified for the Gatornationals elimination rounds. Dennis Chaisson turned in a 7.856 at 177.25 to qualify 14th and Alan Scruggs ran a 7.917 at 172.12 to qualify 15th.