We haven’t talked about new diecast cars based on the Dodge Hellcat models in quite some time, but even after more than 7 years, Hellcat related collectibles are still a hot commodity. Among both hardcore diecast collectors and casual Mopar collectors alike, those who like the Dodge Challenger SRT Hellcat and Dodge Charger SRT Hellcat are generally pretty quick to buy up anything in the store with the Hellcat logo.

For those Hellcat collectors who are interested in 1/64th scale diecast, the folks from GreenLight Collectibles have a cool new item coming to market soon in the form of a Dodge Charger SRT Hellcat. This small scale Hellcat is the first of a new series for GreenLight called Collector Driven. As you can see in the images here, the miniature super sedan is finished in the famous Gulf Racing livery. If you are not familiar with GreenLight Collectibles, they are one of the top brands of premium diecast cars, offering more accurate forms and better detail than the average 99 cent Hot Wheels or Matchbox cars.

As you can see in the company artwork shown here, the new 1/64th scale Dodge Charger SRT Hellcat is clad in the traditional Gulf Racing livery, with a light blue body and orange stripes. There will be a total of four versions of this car, including the “clean” version shown here, a version with the car dirty, as if it just raced across the country, and Green Machine versions of both. 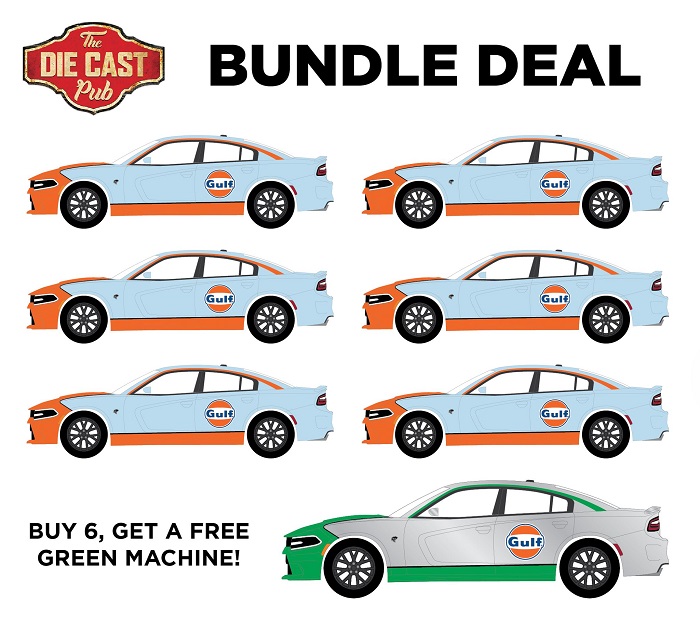 Green Machines are what GreenLight Collectible calls their “chase” versions of each model. These chase cars make up just a small portion of the overall production run and they are the most sought after cars for most collectors. As you might guess, the chase cars from GreenLight, called Green Machines, all have unique green features that differ from the rest of the run. For example, some cars have green rims, some have green tires, some have green painted bodies and some have green trim, but in every case, the Green Machine has distinct attributes that allow it to differ from the rest of the examples of that car or truck. 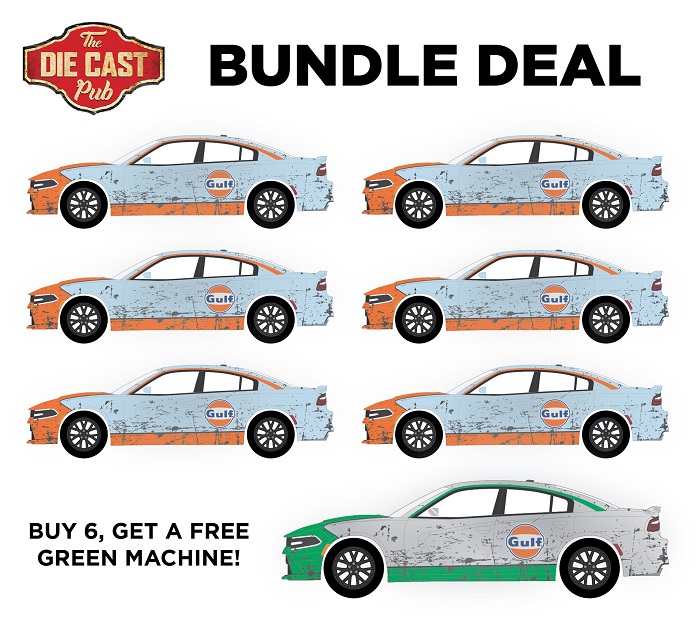 In the case of the new Dodge Charger SRT Hellcat, the orange stripes are replaced by green stripes on the Green Machine version, while the blue paint is replaced with a slick raw metal treatment, which is one of the most popular options for modern chase cars.

How it Came to Life

Some readers already know this, but Amanda Rall, my wife, and I are pretty serious diecast collectors. Among our collection is a sprawling spread of GreenLight models, including nearly every Green Machine version of every 1/64th scale Mopar vehicle offered by the company. In being such active collectors of the brand, Amanda runs two of the largest GreenLight-focused Facebook groups online. 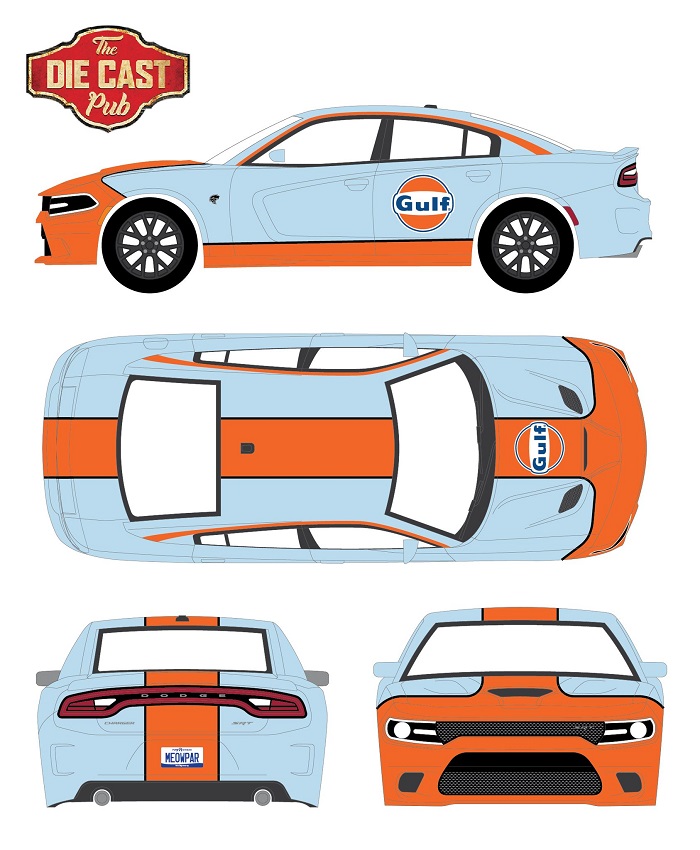 In gathering all of those Mopar Green Machines, attending collector’s events and running those Facebook groups, Amanda has gotten to meet the people who run GreenLight Collectibles. Over time, she has helped announce the launch of new models or product lines on social media along with the launch of GreenLight’s retail store – The Diecast Pub. Recently, the company asked for her and her fellow GreenLight-focused Facebook group admin Derek Twigg’s ideas on a new car that would be designed with heavy collector input; something that would really appeal to collectors.

Knowing the popularity of the Hellcat cars, they suggested a Dodge Charger SRT Hellcat and to give it a unique look, they suggested that they use the Gulf Racing livery. Like the Hellcat name, the Gulf Racing livery has a focused following of its own, improving the likelihood of this being a hot item when it comes to market. Finally, the company needed a name for the new line of vehicles being introduced with collector input, and Amanda proposed the idea of Collector Driven.

The company liked their pitch for the car, the livery and her idea for the new series’ name, so the Dodge Charger SRT Hellcat shown here came to life as the first release in the Collector Driven series. As a special nod to Amanda’s input on this car, it has a Michigan license plate that reads MEOWPAR – which matches the plate on our 2017 Dodge Challenger SRT Hellcat. 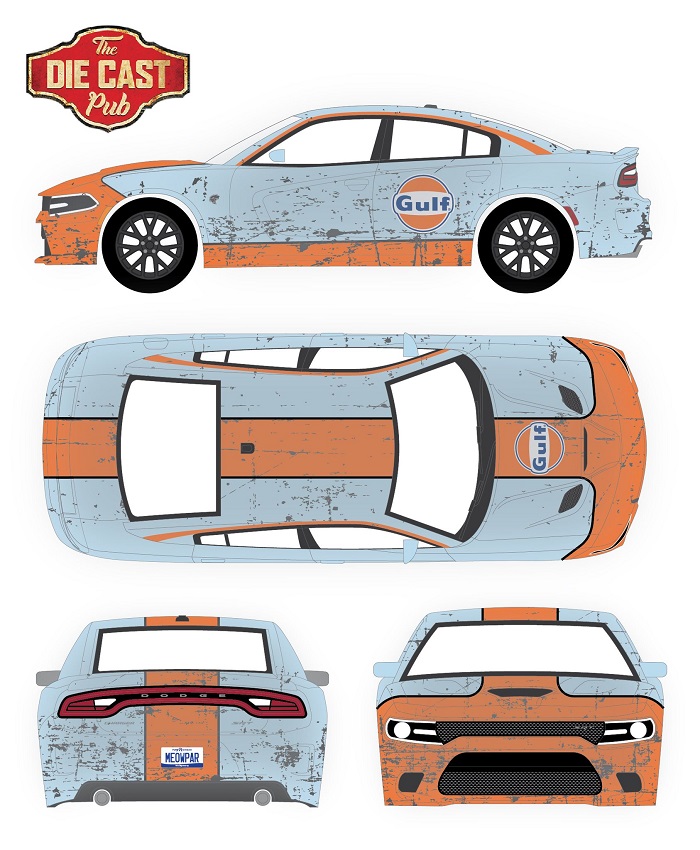 These cars are being designed specifically for sale through The Diecast Pub, so you won’t find this at your local Walmart or some other big box store. They will have an MSRP of $9.99 for one or $59.99 for a case of 6, plus a Green Machine, and they are available for ordering right now. I imagine that most hardcore collectors will buy the case to get a Green Machine. Click here to orders yours from The Diecast Pub.