On media days, it’s hard to know what an auto show will bring the paying customers. The New York Auto Show has opened to the general public, but their web site says it’s too early to show an exhibitor map, and the printed one we were given on media days is probably not accurate (for one thing, the only Mopar brand is Dodge, and it’s on the opposite side of Javits from where we went on media days).

We have a number of stories already posted on the auto show, and there may be news you missed. Some of our early coverage was supplemented later on. This is what we already posted: 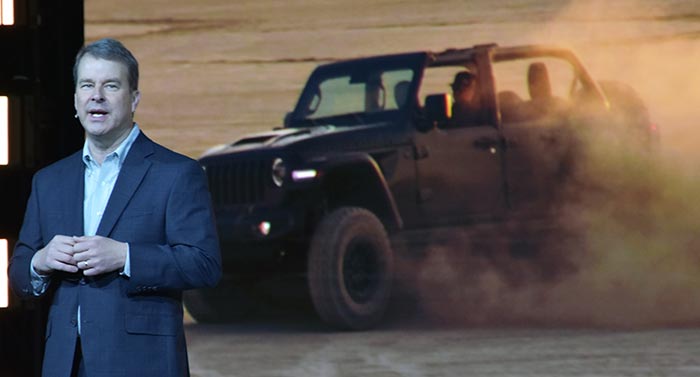 While a good number of global media people were there, including many European and Asian journalists, it was not as well attended as media days in the past. That may be due to COVID fears, or even fear-mongering about New York’s crime rate—which is actually reasonable per capita, especially compared with when I lived up on 120th Street. Statistically, you’re about as safe riding the subway as you are strolling through a random part of Mississippi. 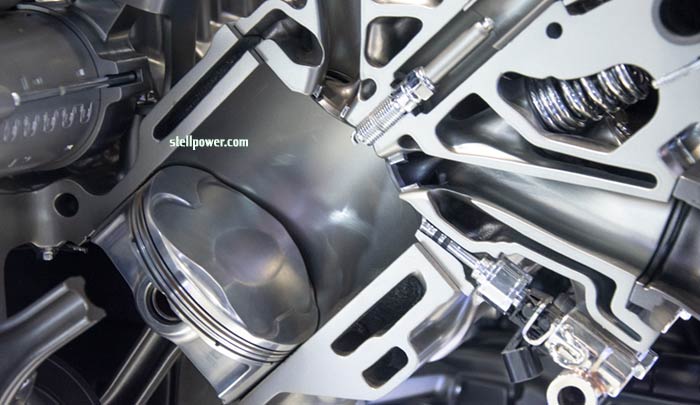 In any case, where but at an auto show can you see this deeply into a Z06 engine? If others are not flocking to the show, it just means shorter lines for us—which is handy since the Jeep rides are more thrilling this year. Again, I am fairly amazed that the long wheelbase Grand Cherokee L can take the full course. I only wish I’d been able to get more photos of the Grand Cherokee L doing its thing; but it was mainly reserved for Jim Morrison to give demonstrations in during media days.  (Listening to the Wranglers going through the course made it obvious which one had the four-cylinder.) 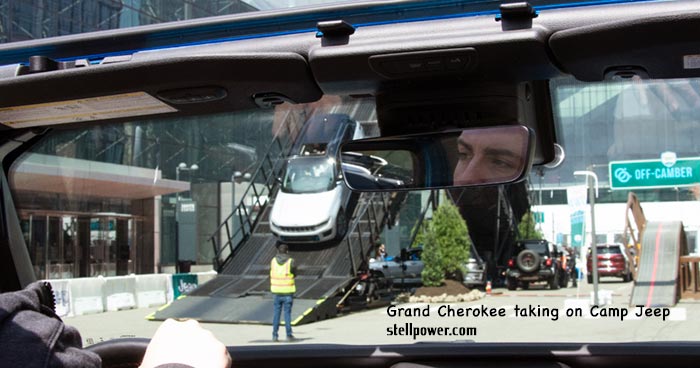 The Wagoneer, which has a nifty $50,000-or-so range from lowest priced to highest priced model. The L has the same styling as the others, but the rear overhang is fairly immense—five inches longer than the base model (since the wheelbase is seven inches longer but length is 12 inches longer).

Nobody seemed to think the Grand Wagoneer L name rolled off the tongue, but there wasn’t much enthusiasm for calling it the Super Wagoneer (a name Jeep did use), either. 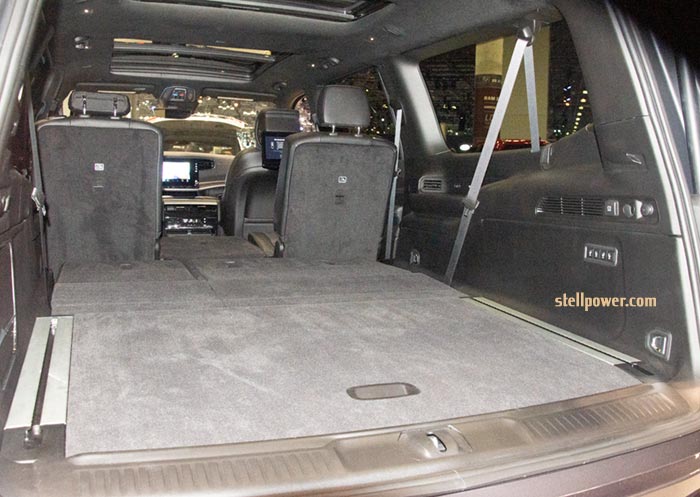 The Grand Wagoneer has a cavernous interior. Here it is with the rear seats folded flat, along with one of the center seats. The center row we tried in an eight-passenger setup wasn’t the most comfortable; the rear row seemed nicer, oddly enough. 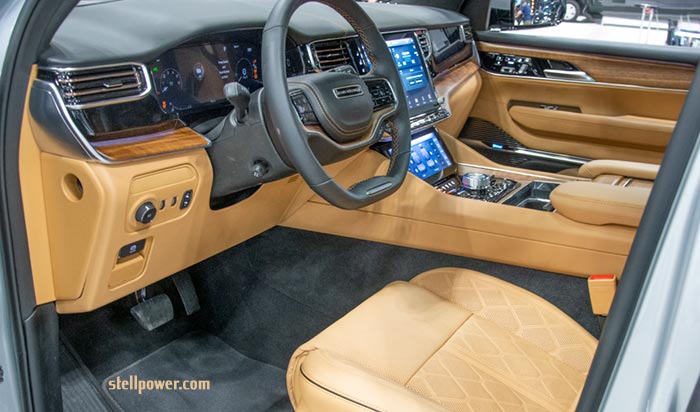 Then there’s this beautifully colored, classically decorated Grand Wagoneer with the saddle tan seats generally reserved for higher-end cars. Note the advertising on the base of the seat… 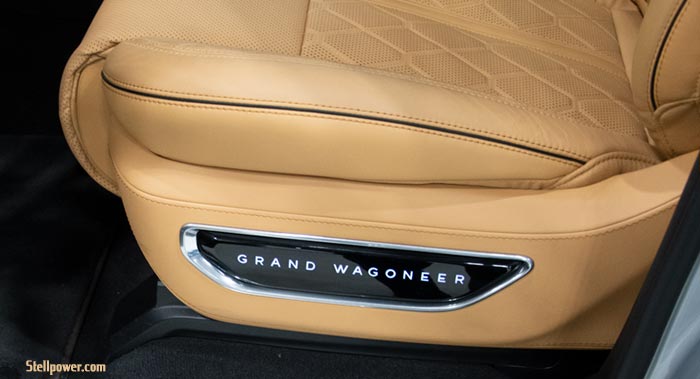 It wasn’t all quilted leather or saddle tan, either; there were some modern touches. Looking at the multitude of screens, though, I did wonder if maybe blue was the right default color scheme. 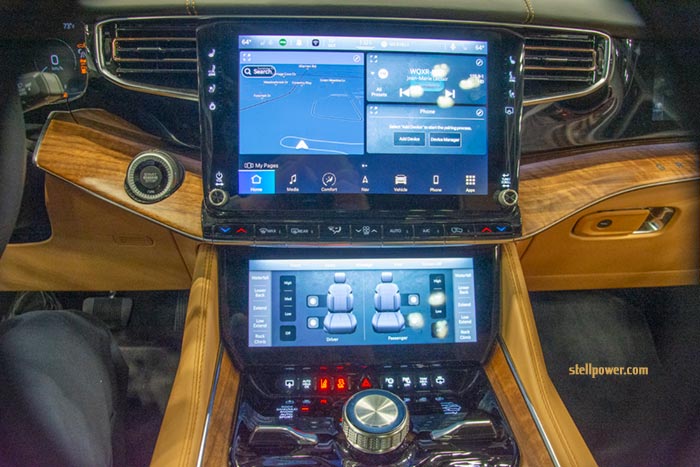 Unlike many cars, the Wagoneer does have physical buttons and knobs in addition to the screens. Note that the bottom screen seems to be mainly for seat and vent controls. The white spots are from show spotlights. I keep meaning to load up a volunteer with big screens to block out unwanted artifacts. Most areas in the car show were fairly dark, relying solely on existing lighting; in some past years automakers brought in their own supplemental lights, too. 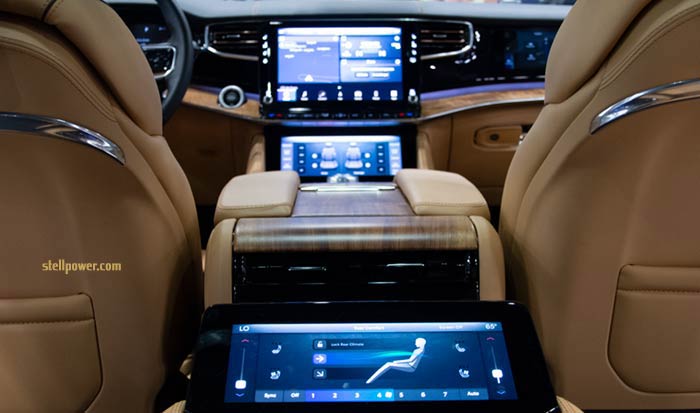 Anyone not in the front seats has been ignored in some cars; but Chrysler has often done well in trimming the back as well as the front. Here the rear passengers have their own wide screen for vent controls and such. There are also noise isolation features. 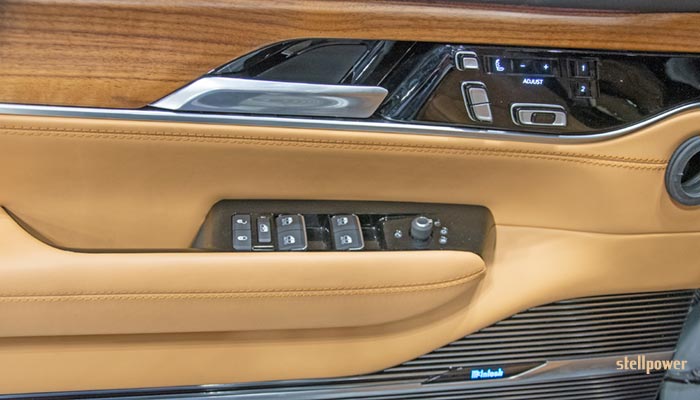 If you’re into the classical wood trim and such, the Wagoneer doors are quite nicely done up. The blue logo on the bottom is for the McIntosh stereos; McIntosh was known for years as the only “major” audio company still making its units in the United States. 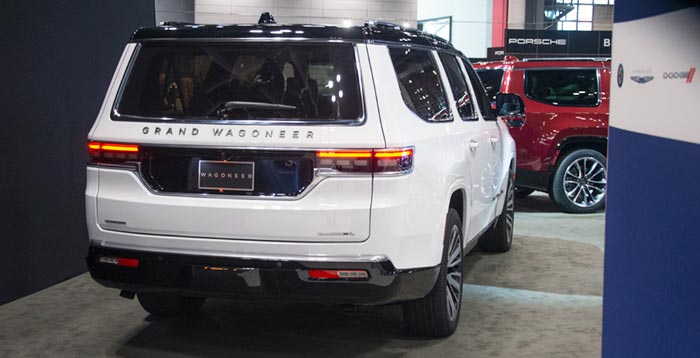 Most of the reporters seemed fairly impressed by the Grand Wagoneer, putting it at the top of its class in luxury feel and appearance. The Airflow was more of an open question, especially since they didn’t open it up and we’re pretty sure it’s still not quite pre-production. It takes a long time to get a new car onto the assembly lines, and the Stellantis deal is still fairly fresh; we’ll see how the Airflow competes when it gets closer to showrooms.

The New York Auto Show is a very short walk from the 39th Street ferry terminal, which is the best way to get there; coming by subway, the 7 line goes to around two blocks away, which is an improvement, and the walk is no longer a seedy collection of taxi repair bays but a busy, upscale set of apartment-and-office buildings. Take advantage of others’ reluctance and visit this year, if you can.