Yesterday, we brought you the formal introduction of the 2022 Ram 1500 TRX Sandblast Edition, with all but one key detail. The Ram Trucks website states that the Sandblast Edition will be available in limited quantities, but the press release doesn’t state just how many. The limited production Ignition Edition earlier this year was held to just 875 units while just 702 units of the Launch Edition were produced. Based on those numbers, we expected that the Sandblast Edition – which is a color-focused package similar to the Ignition Edition – would have a similar planned production volume.

However, it seems as though the Sandblast Edition will be the least limited of the limited edition Ram 1500 TRX models thus far. The press release did not state the production numbers, but a friend in the dealership world sent us a screenshot of an information graphic pertaining to the TRX Sandblast Edition that seemingly reveals the planned production volume for the latest color-based package.

According to the dealership graphic (which we have opted not to republish in an effort to protect our source), the Sandblast Edition is available on the 2022 model year Ram 1500 TRX, it comes standard with the Level 2 Equipment Group and it features the unique Mojave Sand exterior paint. The official MSRP of the package is $9,200 and retail production for the United States is limited to 1,000 units. 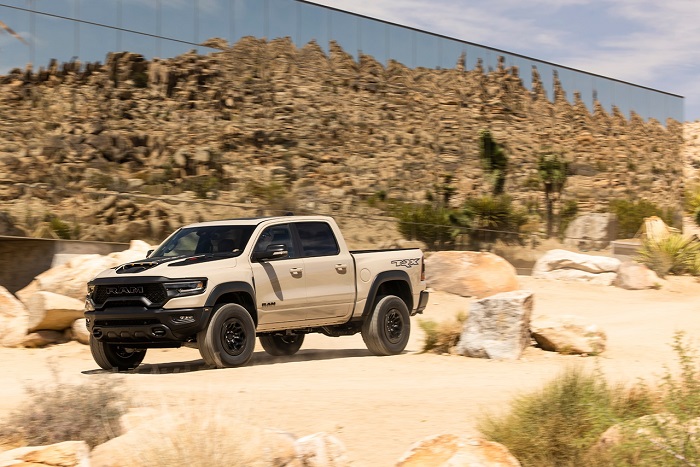 Before going on, we should point out that this information comes from a dealership in the United States, so there could be more examples of the Sandblast Edition if the company produces some units for other national markets. For example, we mentioned above that the Ignition Edition was limited to 875 units – that number applied to the United States. There were also 100 of those gorgeous, bright orange half-ton trucks sent to Canada. It is unclear right now whether or not Canada will get the Sandblast model, but if there are some Mojave Sand-colored supercharged trucks headed north of the border, they will likely add to the total production volume.

That being said, the 2022 Ram 1500 TRX Sandblast Edition will be limited to 1,000 units in the United States, making it the most plentiful of the limited edition supercharged trucks thus far. That is good news for anyone hoping to buy one, but bad news for anyone who wants to buy one based on exclusivity.

One of the key complaints among the Ram 1500 TRX discussion groups on Facebook is the ongoing occurrence of dealership markups. While the TRX is not subject to any set production number, the ongoing production constraints have led to lower-than-normal inventory levels. When you combine low inventory levels with the insane popularity of the TRX, it comes as little surprise that many dealerships are charging additional markups. For those packages with limited production numbers – like the Launch Edition and Ignition Edition – those markups have been even higher.

Provided that the Ram brand builds all 1,000 planned examples of the 2022 TRX Sandblast Edition, this package should have lower or less frequent dealership markups than the Launch and Ignition packages. When you add in the fact that this is the second limited edition package this year and the third in the past 18 months, there is an even greater chance of finding dealerships that are open to making a deal on the price.

In short, the 2022 Ram 1500 TRX Sandblast Edition is likely to sport additional dealership markups – especially when these units first reach dealers – but patient buyers should be able to find these trucks at-or-below MSRP with a bit of hunting around the country.

Ram has stated that the TRX Sandblast Edition will arrive later this summer and based on social media posts from the assembly plant, they are already being produced. Pictures posted to Facebook, taken by employees at the Sterling Heights Assembly Plant, show the Sandblast trucks sitting with protective plastic wrap on various components. There have been several people posting these pictures and they appear to show different trucks in different area of the factory, reinforcing the claim that Sandblast Edition models are being built now.