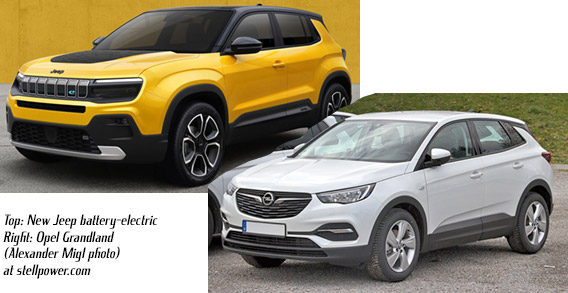 The new Jeep battery-electric shown earlier today bears a startling resemblance to the Opel Grandland. Both are made by parent company Stellantis, but they are unlikely to actually be the same—despite some appearances.

The Jeep is reputed to be about the same size as the current Renegade, and to be made alongside a similar Alfa Romeo and Fiat for sale in Europe and possibly other regions. The Opel Grandland is similarly sized, and was launched in late 2017. It sits on the Peugeot EMP2 platform, shared with the 3008, 5008, and C5 Aircross, but the styling as actually done by General Motors when it owned Opel. It is sold with a choice of gasoline, diesel, and plug-in hybrid engines; the latter uses a 1.6 liter turbocharged four-cylinder with the electric motor. It weighs around 3,000 pounds in gasoline or diesel form.

While the two vehicles may look similar, again, they are quite probably on completely different platforms. They almost certainly do not share designers.  (Thanks to Klayton Kelly, though, for pointing out the similarities.)