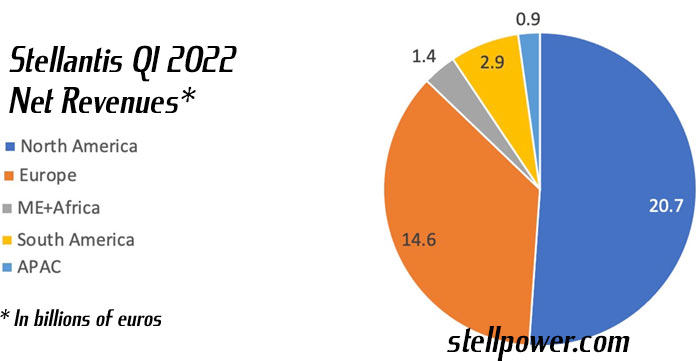 Stellantis reported its global sales and revenues for the first quarter of 2022 this morning. Net revenues were up to €41.5 billion (1 € = US $1.05 = $1.35 CDN), up by 12% from the first quarter of 2021. The company credited higher net sales prices (reduced incentives), more profitable vehicle mix, and better exchange rates; these more than offset production losses due to semiconductor shortages. Stock owners received a dividend of €1.04 per share in April.

The company reiterated its decision to build a large-scale lithium-ion battery factory in Canada, with a 45 GWh annual capacity; to build another at the Termoli, Italy plant; and to raise cell capacity in Europe to 120 GWh by 2030.

By region. In North America, unit sales rose by 6% and net revenues shot up by 30%; the sales increase was credited to new or revised Jeeps, offset by a drop in Cherokees. In Europe, unit sales plunged by 24% due to supply issues, though the Opel Mokka, DS4, Fiat Scudo, and Fiat New 500 all had gains. Net revenues fell by just 9%, as more favorable pricing and vehicle mix countered lower shipments. In South America, volume dropped by 8%, despite higher sales of the Fiat Pulse, Jeep Compass, Peugeot 208, and Fiat Cronos, again due to supply issues; net revenues, though, exploded by 40%, thanks to the vehicle mix and pricing, but also to changes in the value of Brazilian currency. Stellantis has a 23.6% market share in South America.

While Stellantis has an 11.2% share in the Middle East and Africa, nearly as high as in North America, sales in that region are lower; only around 93,000 vehicles were sold in the region. Chinese and Asia-Pacific sales are both quite low at 25,000 and 24,000, respectively, giving Stellantis a 0.5% and 0.7% market share.

As for Maserati, volume fell by 20%, largely affecting the Ghibli and China; net revenue, though, only fell by 5%.

For 2022, the company sees volumes as being fairly stable, with some growth in South America and Asia-Pacific, and some losses in Europe. Adjusted operating income margin should be in the double digits, with positive free cash flow.