Stellantis expects to earn over 2 billion euros ($2.2 billion USD) in 2030 from the “circular economy” or “cradle-to-cradle,” but what exactly is that?

As electric cars have increased in popularity, some have developed their first environmental concern—what happens to all the old batteries? Tesla and GM have been using them for residential and commercial power backup, but that’s not a real answer, because sooner or later the batteries won’t be useful for that, either. 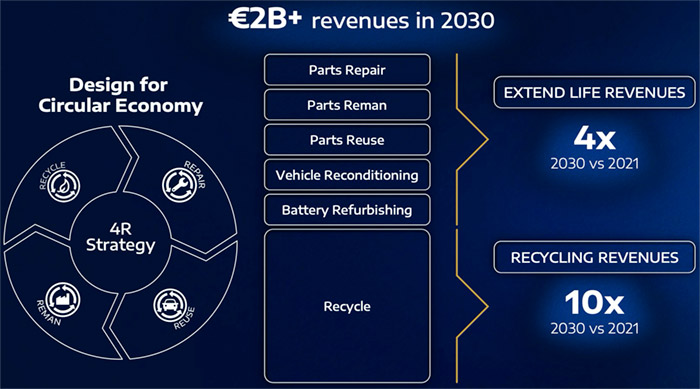 It turns out that recycling automotive batteries is profitable enough that it can even be done in the United States, following toxic waste rules. General Motors has already found a partner to handle its old car batteries; that company will take them apart and re-sell the materials, including recovered lithium (which also helps solve the “where will we find lithium?” question). Stellantis, seeing this money on the table, found an opportunity for more business.

The idea now is that cars can be kept on the road longer by using remanufactured and reused parts and by reconditioning the vehicle, quadrupling Stellantis’ revenue from each vehicle’s full lifespan—while preventing waste and helping customers. Refurbishing batteries and recycling what materials can no longer be reconditioned or refurbished will bring additional revenues. The company expects this revenue to explode from 2021 levels (by a factor of ten) by 2030.

Given the costs of moving Stellantis into this new direction and the higher costs of making electric cars (at this time), company leaders had to search for other sources of profits. Stellantis believes it has found them, by taking a more complete view of the full customer journey, long past the warranty period.